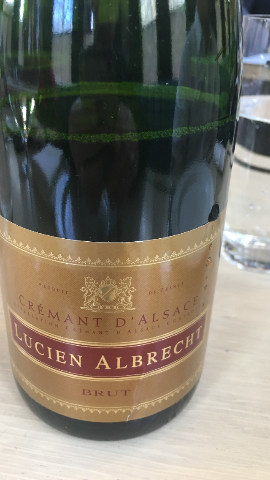 I have long been a fan of the sparkling wines from Lucien Albrecht. The ‘Cremant D’Alsace’ has been a real ‘go to’ wine of mine for get-togethers, parties and celebrations. At close to twenty dollars a bottle, my cellar has always been stocked with both the Cremant D’Alsace Brut and Rose, which is my true favorite.

Last week I had the opportunity to meet Lucien Albrecht’s winemaker, Jerome Keller.

Jerome Keller, the name behind the brand sat next to me at a luncheon for four and was so humbled to learn that his Cremant was at the top of my list for both quality and value. He knew he didn’t have to sell me on his wines because he knew that I knew the products inside and out.

What I didn’t know was that Jerome Keller produced a line of Lucien Albrecht wines, that represent what Alsace is all about, Pinot Blanc, Riesling, Pinot Gris and Gewurztraminer. All vines are harvested by hand-a true trademark of Maison Lucien Albrecht.

Before sampling the wines, Mr. Keller explained that to produce wines at this level, he and his team must follow the grape from the birth on the vine until the varietal is picked and begins the process of fermentation. With cutting edge equipment and advanced winemaking skills, Jerome Keller executes what Lucien Albrecht wines are all about.

The journey began in 1425 when Romanus Albrecht started the winery. Eight generations have followed.

In 1971 the first Cremant was produced by the family and in 1976, the methode traditionnelle was adopted. That means that the same method of making Champagne was adopted for all Cremants, which put them in the same league as Champagne and Spanish Cava. Double fermentation and aging creates Cremant’s profile.

The Brut is made from 100% Pinot Blanc grapes and was recently awarded four gold medals, giving Maison Lucien Albrecht more gold medals than any other Cremant producer in France.

The Lucien Albrecht Cremant d’Alsace Brut Rose is made from Pinot Noir grapes. It has a second fermentation in the bottle, then stays on the lees for nine months before being disgorged. The small bubbles circle the rim of the glass when poured, illustrating a well made wine. Red, exotic fruit prevails, rhubarb and red current bring out brightness to this salmon colored show stealer.

The 2016 Pinot Blanc Cuvee Balthazar ($17) was the first of the new series of wines, for me, that I sampled with winemaker Jerome Keller. The wine was pale yellow in color, fresh and supple with hints of apricots and sunflower seeds. Smooth and stylish on the palate, a great wine that could be used as both an aperitif and a food wine.

The 2016 Riesling Reserve ($16) jumped out of the bottle like a rocket. Balanced, yet not contained, the intensity and persistence of the wine’s acidity gave life to its citrus notes. Don’t get me wrong, it is overpowering in a good way. Riesling is the dominant grape in Alsace and this interpretation is special and stylized by winemaker, Jerome Keller.

The 2016 Pinot Gris Cuvee Romanus ($20) is named after Romanus Albrecht the wineries founder. The clay and limestone support the 100% Pinot Gris grape to dance on your palate. Distinctive flavors of orange spice, earth, chalk and honey are abundantly blended with a creamy smokiness that elevates with each sip.

The 2016 Gewurztraminer Reserve ($20) is a wine that I could drink everyday. The wine is very lively, like sunshine in a bottle. The faint spiciness and acidity of this medium bodied wine highlights the semi-sweet flavor of passion fruit and pineapple.

Alsace is an appellation in France that has been part of France and Germany throughout history. My family is from there. The region feels isolated and historically has followed centuries old traditions and maintained its own culture, a combination of both countries. Most of the wines (90% white) from Alsace come in the traditional tall, mostly green glass bottles.