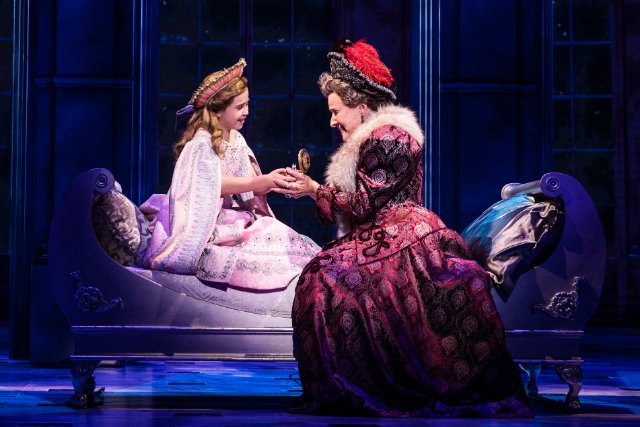 (Photo by Matthew Murphy) Victoria Bingham as Little Anastasia and Joy Franz as her grandmother, the Dowager Empress. 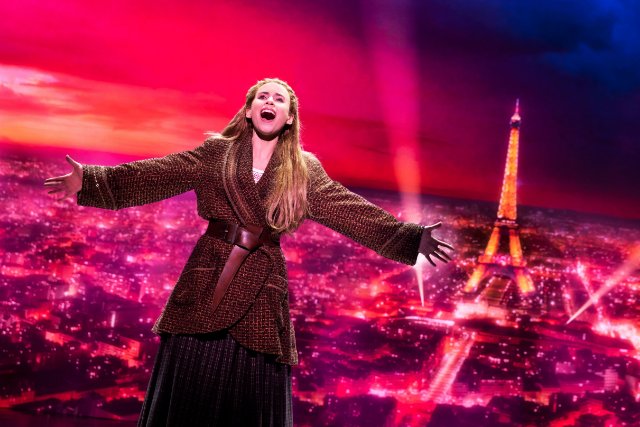 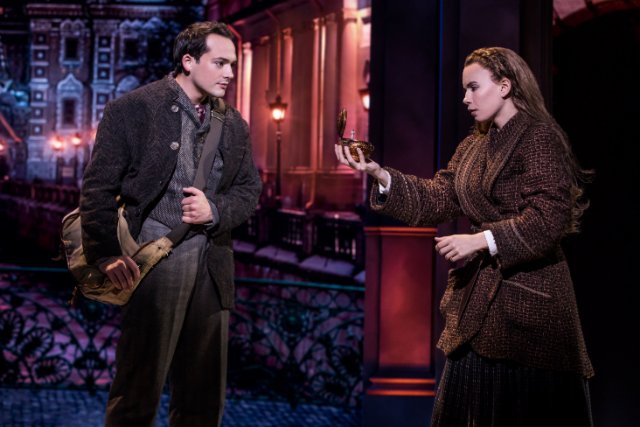 (Photo by Matthew Murphy) Stephen Brower as Dmitri and Lila Coogan as Anya.

Dramamine is not one of the products for sale in the theater lobbies where the Broadway musical adaptation of Anastasia plays.

But if you are prone to motion sickness or equilibrium disturbances, you may want to consider asking your doctor or pharmacist about taking medication before attending.

To be sure, nothing that you will see or hear will come even close to revolting you to the point that you become sick. Quite the contrary, the sights and sounds will delight and transport you into the gorgeous, jaw-droppingly realistic world of turn-of-the-century Russia and 1920s Paris.

Still, Aaron Rhyne’s enthralling, cinematic-style projections tend to make the stage disappear. In its place, a breathtaking countryside with an authentic-looking train might materialize out of the thin air. And yes, the vehicle looks as though it is actually moving, with the characters on it.

This picturesque, vivid projection is one of many that might drop your jaw at its stunningly seeming authenticity. Indeed, you sense that you’re watching a film. Perhaps, you may feel as though you’re viewing the beloved 20th Century Fox 1997 animated movie musical, Anastasia, which inspired the Broadway musical.

Speaking of the stage version, it will surely delight many Fanastasias (the film’s devotees).

But keep in mind, the play, while largely faithful to the film’s story, is a more sophisticated Anastasia.

Specifically, the characterizations, music and emotions are more complex and richer. Also, there’s far more emphasis on the politics, culture and history of the times. Moreover, the play runs about 2 hours and 40 minutes, compared to the roughly 90-minute movie, which seems designed mostly for children and veers into melodrama. The live version contains additional quality songs, while retaining the beloved music of the film.

A national Equity touring version of the Broadway musical adaptation is stationed at Ft. Lauderdale’s Broward Center for the Performing Arts through May 5. However, little is stationary in this epic show of perpetual motion. It transports us from stately halls and palaces of Tsarist Petersburg, via Communist Russia to more downtrodden places during these times. Then, the production whisks us to the free-spirited, fun-loving party scenes of arts and culture-rich, luxuriant 1920s Paris.

Undoubtedly, all this dizzying, rapid-paced movement is appropriate for a story about a “Journey to the Past.”

For the amnesiac street sweeper Anya, the journey isn’t the smoothest. The beautiful, vivid landscapes, which seem in motion, can symbolize this.

Projection designer Rhyne and set designer Alexander Dodge had wanted to “blur the line between what is a physical piece of scenery and what is a video projection,” Rhyne wrote in a souvenir program. The duo set out to “really create an integrated design where video and scenery go hand in hand.”

And to their credit, Dodge and Rhyne have created an authentic looking world, into which we are drawn. For instance, gun-toting, Russian flag-waving soldiers appear silhouetted against falling snow and raging fire. It resembles a real war zone. Soon, a striking palace appears, seemingly out of the thin air.

Remarkably, none of the vivid projections get in the way of the narrative or the characters’ heartfelt, resolute emotions.

That is a credit to the talented actors, as well as director Darko Tresnjak’s attention to detail and lighting designer Donald Holder’s focus.

Holder’s mood-enhancing color palette is as varied as the evocative score by lyricist Lynn Ahrens and composer Stephen Flaherty.

The lighting, among other things, helps reinforce the rapid movement between settings. Sure, one must pay close attention to keep up with the story. In the case of the stage musical, the plot is complex and can be hard to follow. Still, Tresnjak varies the pace enough so that we can keep up with the storyline. Further, the director ensures that the production tells a human story. The play doesn’t merely offer a history lesson.

Anastasia takes place before, during and after the Russian Revolution. It dismantled Tsarist Russia, leading to the Soviet Union. The Romanov family perished.

Whether the film and play are historically accurate is a matter for historians to decide.

Regardless, it’s easy to become emotionally invested in the tale that book writer Terrence McNally, Flaherty and Ahrens tell.

In post-revolutionary Russia, Anya has amnesia. She spends her days sweeping the streets and hoping to learn about her past.

In this touring production, Lila Coogan usually plays Anya. But on opening night at the Broward Center, Coogan couldn’t perform.

However, one would never guess that cast member Beth Stafford Laird is understudying the role. She delivered an emotionally-rich, vivid, spirited, honest and altogether multifaceted portrayal. Her Anya is vulnerable at times, spirited during others, but also tough and assertive. No question, Laird makes Anya a strong female character.

Just as Anastasia relates a journey into the past, the character undergoes an emotional journey in song. This is particularly true when she sings the appropriately titled “Journey to the Past.”

Laird starts singing softly, slowly and tentatively. Her body language suggests hopefulness, but uncertainty. Then, the performer moves with more confidence. Also, her voice and expressions assume a determined, positive, triumphant tone and manner. By the song’s end, she’s walking and singing with conviction. There seems to be no doubt in Anya’s mind that she will discover her past.

One of Anastasia’s main roadblocks is her grandmother, the Dowager Empress. We first meet her during the show’s beginning. During that time, the older woman and Little Anastasia sing the tender, wistful “Once Upon a December.”

At first, Joy Franz radiates a loving, grandmotherly demeanor as the Empress. Her rendition of “Once Upon a December” with Little Anastasia is heart melting. But, as skillfully portrayed by Franz, the character grows convincingly bitter and mean. And who could blame her? She’s endured too many times when a fake “Anastasia” has come before her.

Will the Empress believe that Anya is the real Anastasia? Two conmen, Dmitry (a conniving Stephen Brower) and Vlad (a cunning Edward Staudenmayer) have plans to present Anya before the older woman. Of course, their ultimate goal is to pocket the money she has offered for Anastasia’s return.

Dmitry might be a con. Still, he, like other characters, undergoes a transformation. In particular, he learns that there is more to living than money. Brower transitions seamlessly and convincingly from an opportunistic young man to a sincere, caring and even loving one.

Unlike in the film, the main villain is not the mad, cartoonish, melodramatic Rasputin. Instead, it’s Gleb, the son of the Russian revolution. He might remind some of the unbending Javert in Les Miserables.

Gleb is a career officer in the Bolshevik secret police, passionately defending the new order. By adding this character and subtracting Rasputin, McNally adds more intense dramatic conflict to the tale. Gleb’s father played a major role in assassinating Tsar Nicholas and his family (Anastasia’s family). Does he finish his father’s job by killing Anya, who might be Anastasia, or give in to his fascination with the young woman?

As Gleb, Jason Michael Evans makes us feel the character’s strong sense of purpose. With his fiercely determined eyes and voice, Evans makes Gleb’s determination palpable. So, too, is his struggle to pull (or not to pull) the trigger.

Ahrens and Flaherty’s moving score is memorable and deepens character.

The music is as varied as the choreography, which features dances as different as jazz age Charlestons and imperial Russian Ballet. The performers deserve kudos for executing the dances with flair and grace.

And then there are Linda Cho’s diverse costumes. They beautifully define and differentiate the characters. The costumes are also gorgeous and allow characters to move with apparent ease, despite their weight.

Meanwhile, Dodge’s numerous, diverse sets skillfully convey a sense of place. This is true whether a locale is run down or as opulent as Cho’s costumes.

A rich sounding orchestra accompanies these expressive singers/performers with flair. And to the musicians’ credit, they never drown out a single performer.

While almost the entire cast and behind-the-scenes crew are strong, Tari Kelly overacts as Countess Lily. She’s overly silly too often. The Countess is part of a subplot that saps the dramatic momentum a bit from McNally’s otherwise humorous, moving book.

Even so, a story such as Anastasia can resonate painfully but truthfully today. Indeed, immigrants deported when their children were mere infants or toddlers may leave their offspring without much knowledge of their past. And so, naturally, these offspring may seek to journey to their pasts, like Anastasia.

One only hopes they’re a fraction as successful and lucky as Anya – the real, royal Grand Duchess Anastasia Nikolaevna.

The equity touring version of Anastasia continues through May 5 at the Broward Center for the Performing Arts, 201 SW 5th Ave. in Ft. Lauderdale. For showtimes and tickets in Ft. Lauderdale, as well as venues in other cities, visit https://anastasiathemusical.com/tour.