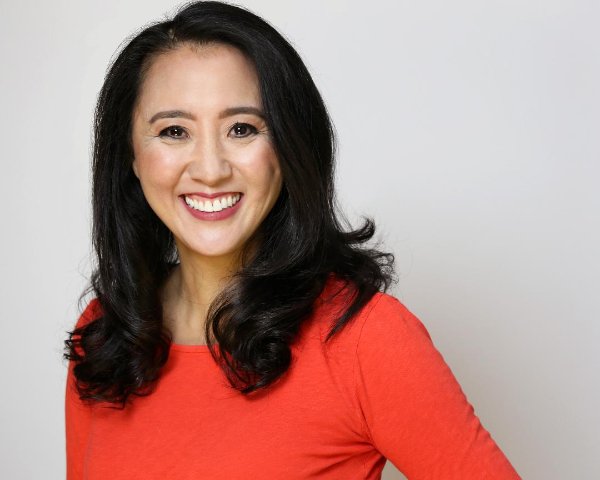 As the United States continues to impose its will on some of the most ancient and noble cultures in the world the Far East remains a hot spot.

It is fitting that Spiro Veloudos, Artistic Director of the Lyric Stage, has chosen Stephen Sondheim’s Pacific Overtures to end the 2018-19 season.

While the story of forced Westernization in the 19th century may still fit well in the 21st, what is new in this production is the casting of Lisa Yuen as the Emperor, Shogun, Storyteller, and Reciter. These are roles traditionally played by men.

Yuen is a veteran of the Lyric stage. She appeared in acclaimed productions of Kiss of the Spider Woman, Into the Woods, Sweeney Todd, and The 25th Annual Putnam County Spelling Bee. She had performed in many other area productions including North Shore Music Theatre’s The King and I. For seven years she was on Broadway in Miss Saigon.

“Spiro…had a great success with his…production of Nicholas Nickleby,” Yuen explains, recalling the 2010 show that had 24 actors playing 150 parts. “He is approaching Pacific Overtures in the same manner; he has a cast of 11 people…and has every actor play the role that best fits.”

Yuen notes that Pacific Overtures has “a long history of men playing women,” and that, in recent Broadway and off-Broadway revivals, there were also women playing men.

Furthermore, while the Shogun and Emperor may be considered “male” roles, the Reciter need not be of any particular gender.

“Ultimately,” Yuen suggests, “the Reciter is a just storyteller.”

The original 1976 production of Overtures was presented in Kabuki style which traditionally includes male actors. The newest version is told in a more contemporary perhaps Western way. Yuen, however, sees no reason to adhere to particular gender lines.

She states, “I think my modern voice lends a simplicity to the text and makes it more relatable,” noting that “most of the actors are playing with gender.”

Once the issue of gender is taken care of, audience members can take in a world-spanning and world-changing musical that is typically brilliant but also different from any of Sondheim’s other pieces.

“The play combines Eastern and Western theatrical traditions,” Yuen observes. And while elements of Kabuki remain, she emphasizes how Veloudos tried primarily to focus on the story to maximize ease of understanding and contemporary impact.

“If it helps tell the story, then keep the tradition,” Yuen says, echoing her director’s motto. “If it doesn’t help, then take it out!”

As she had experience with Veloudos and the Lyric company before, Yuen knows the company and the space well and is a big fan.

“I just love this thrust theatre,” she says, noting how it is especially great for revivals as it allows both new and old fans of familiar shows to experience them in a more intimate way. “I love the audiences here.”

When recalling her performances of Spider Woman, Yuen is still impressed with “how well the audience listened to the text and wanted to open their minds to new ideas.” So even though some of the ideas in Overtures are centuries old, Yuen is confident that the Lyric audiences will take away new things from them.

A California native, Yuen lived in New York for over a decade before coming to Boston to join her husband who works for a small, liberal arts college in Cambridge.

“I really wanted to start a family and keep the family unit together,” she explains when asked why she has returned to Boston-area stages time and again.

As a fifth-generation Asian American, Yuen admits that she may not feel any personal connection to the story of Overtures, but still considers it a “powerful vehicle. We have control on how we want our cultures portrayed on stage…and how these international decisions effect everyone both then and now.”

As one of the major themes of the show is alleged progress Yuen sees many ties to today’s world where industrialization has caused more problems than solutions.

“Until 1853,” she maintains, “Japan lived in perfect peace with serene and changeless cycles of their days.  It becomes industrialized but at what cost?  Similarly, today we are constantly making huge strides in technology…. We are so connected but lack actual human contact and long for real relations.”

All these years later, Sondheim’s genius continues to connect people and ideas in new ways revealing the best and worst aspects of humanity.

Pacific Overtures runs May 10-June 18. Tickets are available at https://tickets.lyricstage.com/.