The Niceties by Eleanor Burgess 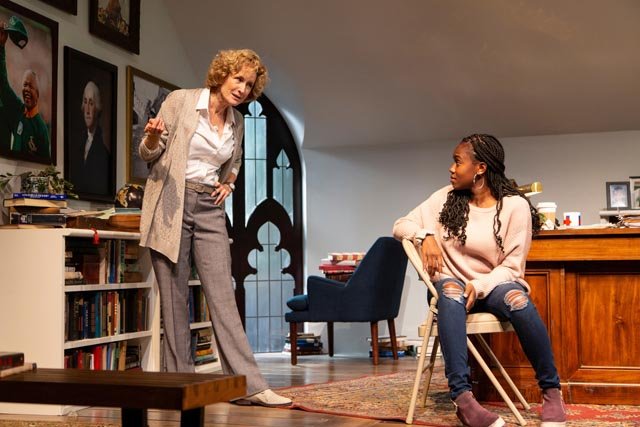 It’s not quite the Lincoln/Douglas debates subject matter but it’s probably more important in 21st century America when it comes to America’s “original sin and shame” of slavery.  It’s been one hundred and fifty-four years since the U.S. Civil War ended and fifty-five years since the Civil Rights Act of 1964 codified and rectified the equality question for all citizens.

Yet the subject matter of racism and discrimination still festers in our society when it touches the hot button issue of white privilege and equal opportunity.  Arguably, there is no more important issue facing our society today when it comes to internal and social issues.

“The Niceties”, a sharp, intelligently written drama by playwright Eleanor Burgess that is smartly and seamlessly directed by seasoned director Kimberly Senior, is currently on stage at the Geffen Playhouse, in Los Angeles.

Two-hander plays are talky, yes, but this production transcends any trace of boredom or disengagement, thanks to a mesmerizing stunning performance from relative newcomer, 22-year-old Jordan Boatman, who electrifies the audience with a finely judged performance as Zoe Reed, a gifted, young, articulate, black university student.

Set in 2016, the drama centers around Zoe (Boatman) a young black student at a liberal arts college who is called into her white professor’s (Banes)  office to discuss her paper about slavery’s effect on the American Revolution.  What begins as a polite clash in perspectives in age and place explodes into an urgent debate about race.

Playwright Burgess, got the idea for this provocative, and timely piece, as a result of a Yale University (her alma mater) campus protest by students over free speech issues.  Burgess moved the unrest from the campus into the office of Professor Bosko where reason and intelligent discussion would take place.

In the beginning of the first act I thought we were going down the road listening to echoes of David Mamet’s blistering piece “Oleanna” about sexual harassment in academia.  But, fortunately, this intellectual think piece on race and discrimination transcends the tawdry salaciousness of tabloid journalism, ala the NY Post or London’s News of the World newspapers (although it’s difficult to avoid it today).

We’re not living in our grandparent’s society anymore.  The world is constantly evolving and the passage of time is what fuels the differences between Zoe and Professor Bosko. Every younger generation has always been passionate about issues that still remain unaddressed in our democracy-based society. Yes, progressive students and young adults believe they are immortal and are going to live forever, but that doesn’t dissuade them from trying to make their elders see the world through their eyes and experiences in the here and now. Only by walking a mile or two in someone else’s sandal’s can real change begin to take place.

Playwright Burgess is a fresh and vital voice into exploring these thorny issues that have been plaguing the world’s societies for hundreds of years. Slavery, after all, is a pre-biblical anathema that has been roiling both black and white American society for 400 years. It’s been baked into our WASPish history.

The exchanges in “The Niceties” between the older and experienced professor and her young, whip-smart budding activist-in-waiting, is fascinating to watch.  One cannot help but be drawn into their yin and yang tussle as each tries to have their position win the other over.  Also, it’s a bonus to become a fly on the wall of Bosko’s office, so to speak, during these exchanges.  It’s good stuff.

The on-stage chemistry between Ms. Banes and Ms. Boatman is absolutely palpable and riveting in its execution.  They created the roles of Zoe and Professor Bosko, under the direction of Ms. Senior in The Huntingdon Theatre Company production in 2015.  And they haven’t missed a beat in the transfer.  If anything, their exceptional “pas de deux” performances are enriched with time.  Of course, we’ve had many stories staged and filmed over the years, all providing or making a case for why society moves so slowly to embrace change when it comes to race and discrimination.

What Ms. Burgess and Ms. Senior bring to “The Niceties” table, is for her actors to ingest and then deliver, her devilishly clever dialogue in scenes that are, at times, raw, compelling, and rich in insightful emotions.  It’s her well-balanced script that keep the audience fully engaged right from the get-go to its ambiguous ending.

Good writing elevates and inspires everyone in a production including the audience.  Although the play is powerful in its subject matter (one millennial white male patron stormed out from the first row in the first act the night I attended), Ms. Burgess wisely leavens her potent drama with a tad of light comedy every now and then which is cleverly tossed in for good measure.

In the technical department the creative team led by director Senior includes: An intriguing and striking set design by Cameron Anderson with Lights designed by D.M. Wood that provides just the right amount of light to see and appreciate the costume designs and choices of designer Kara Harmon and  Elisheba Ittoop, provides the Original Music & Sound Design, that completes the creative team. The production is stage managed by Ross Jackson.

“The Niceties”, is an impressive production that performs at the Geffen Playhouse and runs through May 12, 2019.