All in the Timing by David Ives 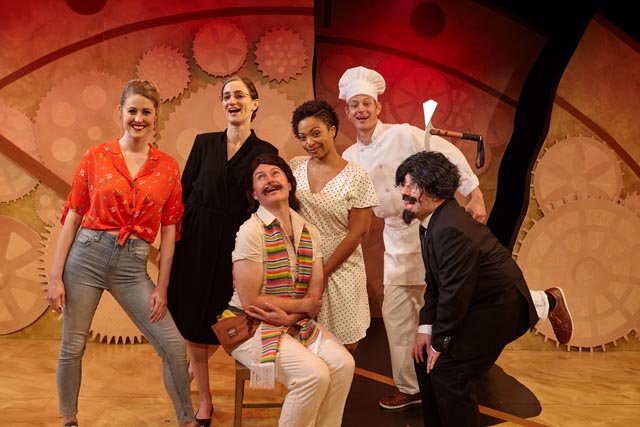 Artistic Director David Ellenstein has a penchant for sniffing out brilliant, but slightly off-beat, cleverly written material from some of America’s most gifted playwrights and screenwriters.  It takes experience and unerring skill to be in tune with what pleases and entertains North Coast Repertory Theatre (NCRT) patrons and audiences over his eighteen year stewardship.

Like that old, but effective, All State Insurance TV commercial that asks … “are you in good hands?”  The answer for NCRT patrons is a resounding YES!

Playwright David Ives is a prolific playwright, screenwriter, and novelist who is best known for his comic one-acts and is considered the master of the short form.  Ives is an excellent choice from which to cull  plays that are creatively crafted, and boast a broad appeal be they comedies like “All in the Timing”, now on stage at North Coast Repertory Theatre, in Solana Beach, or his drama “Venus in Fur”, garnering a 2012 Tony Award for actor Nina Arianda. He definitely knows how to quickly engage an audience.

“All in the Timing”, wonderfully staged by NCRT artistic director David Ellenstein, has surrounded himself with a winning ensemble cast of professional, gifted farceurs, comic actors and performers who know their way around a sharply written and smartly directed production; which is becoming the norm these days at NCRT.

The tone of the production is wisely set by director Ellenstein in the first sketch-piece titled ’Sure Thing’ with actors Noelle Marion and Christian Pedersen who meet in a café. Their dialogue continually resets each time they say the wrong thing, until, they romantically connect.

This piece will bring a smile of recognition as well as laughter to many in the audience as they harken back to their own experiences in the mysterious art of how to meet women as practiced by men.   It’s funny and it’s poignant at the same time. Pedersen’s cautious opening gambits are hilarious and Marion’s retorts are a deflecting delight.

Although written twenty-six ago, the play features six comedy vignettes that are highly relevant to audiences of 2019. There is no dated material in this cleverly written and sensationally performed production.

The only clue to its original time period comes in the second sketch titled ‘Words, Words, Words’ that reminded me of the 1950/60’s Bob Newhart comedy routine about whether an infinite number monkeys, if given the time, could eventually write Shakespeare’s masterpiece “Hamlet.”  Omri Shein, as Milton, David McBean, as Swift, and Uma Incrocci, as Kafka make believers of the audience in that they might come close but… nah, probably not. But, it’s fun watching them try.

In “Foreplay, or The Art of the Fugue”, the full ensemble cast of three couples simultaneously play a game at a miniature golf course:  Taylor Renee Henderson as Amy; Omri Schein as Chuck; Noelle Marion as Annie; David McBean as Chuck 2; Uma Incrocci as Alma and Christian Pedersen as Chuck 3, give the audience a glimpse into competitive male preening self-imagery.

The sketch piece titled “The Universal Language”, is a goofy, but hilarious send-up of “Esperanto”, the erstwhile single-language equalizer between the world’s many languages that never caught on.  Here we observe a naïve, stuttering young woman, Dawn (Taylor Renee Henderson) who wants to sign up for lessons in the school to help her solve her speech impediment problem.  Don, the founder of a scam teaching language school is eager to sign her up. The performance as the con-man is deliciously and entertainingly played by a terrific David McBean.

Don only speaks in his created language called ‘Unamunda’.  A bewildered but eager Dawn jumps into the lesson.  Words like “Velcro” for “Welcome” and Harvard U for “How are you?” gives one a hint of the endless possibilities for tongue-twisting sounds of the Unamunda vocabulary that keep the audience in stitches.

In sketch number five “Philip Glass Buys a Loaf of Bread,” is a creatively gentle poke-in-the-eye to the dissonant musical compositions of Philip Glass. He was an outlier musical composer for years but never bended to demands of changing his style. Again the full cast of Noelle Marion, Taylor Renee Henderson, Uma Incrocci, Omri Schein, Christian Pederson, and David McBean bring the house down with a celebration of stubbornness and tenacity played by Schein as Philip Glass who won’t take no in trying to buy his loaf of bread.

The closing sketch “Variations on the Death of Trotsky” is a page right out of the theatre of the absurd playbook.  Omri Schein as Leon Trotsky performs Leon with a mountaineer pick axe sticking out of the top of his head throughout the sketch as if nothing is amiss. His wife Mrs. Trotsky (Uma Incrocci) also is oblivious.  It’s Ives at the top of his game along with this outstanding cast at the top of their games.

If all the on-stage action intimidates you when it comes to the question what’s going on? Relax. Sit back and enjoy this wonderfully funny production. Your epiphany or “Ahah” “got it” moment is just waiting to kick in. “Patience, Watson.  All will be revealed.”

“All in the Timing” performs at North Coast Repertory Theatre, in Solana Beach and runs through May 5, 2019.  The comedy performs without an intermission and runs about 90 minutes. It’s a must see Production.