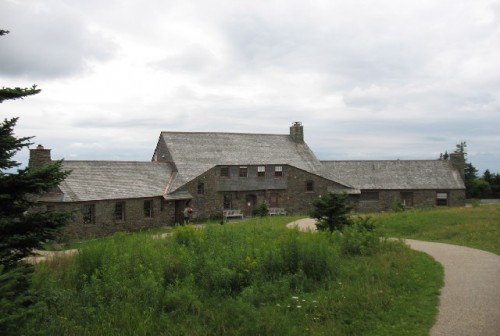 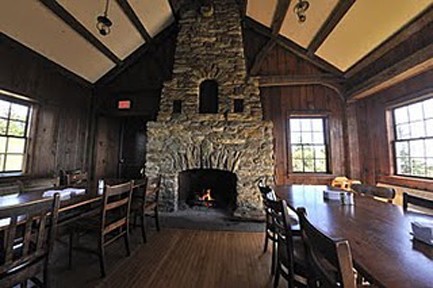 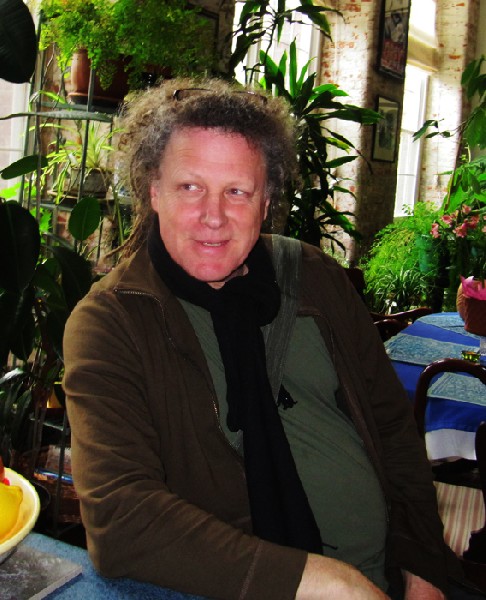 On May 14 the renowned Bascom Lodge on the top of the Mt. Greylock will open for its third season under the management team of the artist, Peter Dudek, his brother and chef, John Dudek, and John’s partner, Brad Parsons.

They operate under a 25 year lease with an agreement to undertake some $500,000 in renovations and improvements in lieu of rent.

Recently, Peter dropped by our loft to provide an overview of the historic lodge and plans for the coming season.

In winning a competition for proposals to operate the state owned property they have agreed on a punch list and timetable. The business plan calls for improvements to be completed during the first  ten years of the contract. Dudek assured us that they are on track if not a bit ahead of schedule.

The first season was grueling just to get the Lodge in shape to open. He recalled twelve hour days just to open by July and then staffing after that.

This year there will be a soft launch with the Lodge just open on weekends in May. From June through November it is open daily serving three meals. There are bunks and a couple of private rooms that sleep 34.

For an average of six weddings per season the Lodge is sold out, usually on Saturday night, and occasionally for the weekend. There are other regular groups and corporations that book events and retreats.

“Bascom Lodge was built in the 1930s and completed by the Civilian Conservation Corps (CCC)” Dudek said. “It was built in three phases. The last two included the lobby and main dining room. It was part of the WPA era. A lot of local people worked on it. People come up all the time and tell us “My grandfather built that fireplace.” The stone was from the mountain as well as the lumber. They did the trails and the roads. There were camps year round. In the visitor’s center we have photos and artifacts.

”There are certain groups that come up like a radio group. They bounce off the moon and communicate with South Africa. They take over the whole Lodge for two or three days. There are competitions and they come up a couple of times a year. Weddings take up the whole Lodge. We have seven weddings this year and six or seven last year. Usually they take a Saturday but sometimes they take two nights. Depending on the numbers it costs between eight and twelve thousand. There are some that do a smaller thing for just two or three.”

John  works full time and lives in the Lodge during the season. Brad works on weekends, mostly on the grounds. Peter will be part time this summer and organizes the programming, some of which is free, as mandated by the contract.

Peter is a sculptor with a studio in Pittsfield. He has been adjunct faculty at the School of Visual Arts for 25 years with 20 years at Hunter College. Before becoming involved with Bascom Lodge, for three and a half years, he was director of Storefront Artists Project in Pittsfield. He took over from Maggie Mailer, the founder of the arts organization, who also served a three and a half year term.

While not yet in the black Dudek is sanguine that with time the Lodge will be a viable business. They have a commercial loan from Berkshire Bank. Currently they draw a basic salary which hopefully improves with time.

The Lodge had been shut down for two years because the state was renovating the road. It had been active since the 1930s as a Lodge with dining and lodging. It’s along the Appalachian Trail but you could always drive up.

”Our experience is that mostly overnight guests are vacationers” he said. “Occasionally hikers will stay but only if the Lodge is their destination. They have to make their daily miles. We have a deal where if they are willing to put in a couple of hours of work we give them a free place to stay. There are a lot of local day hikers and we do a brisk lunch with them. Dinners are a mix of vacationers and locals.

“The concept is ethnic and regional influences on cuisine. We’re a member of Berkshire Grown so we try to do local produce. For the opening day, May 14, we will serve venison and we are doing a day of Native American programs. Lunch features a pulled pork sandwich, vegetarian dishes, BLT’s. For dinner it’s $28 for a prix fixe meal and a different menu for each night. That includes soup and salad, an entrée, like flank steak or Kansas City barbecue. My brother’s specialty is desserts. He was a dessert chef in New York for over 20 years.”

For the coming season Dudek has planned special programming “We also do cultural events which are free and open the public” he said. “The Wednesday night series is at 6 PM and it could be about nature or culture. A talk on fire flies. Chesterwood is coming up. We have historical homes. Susan B. Anthony is coming. Nana from Topia will perform.”

Mount Greylock, is the highest point in Massachusetts at 3,489 feet (1,063 m). It’s a challenging drive to the summit. More so after dark and a couple of beers at the Lodge. So you should plan to have a designated driver. The views, to be sure, are just spectacular.

Be sure to add a trip to Bascom Lodge to your summer and vacation plans.