Journey of a Prince and an Artist 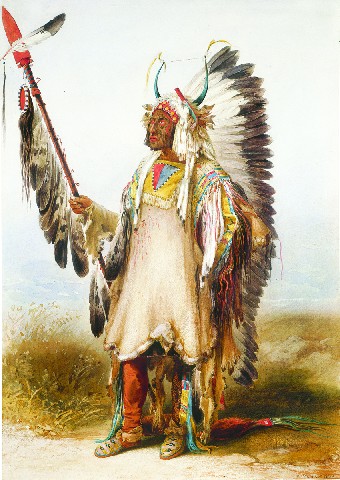 THE JOURNEY OF A PRINCE AND AN ARTIST: EARLY VIEWS OF THE AMERICAN WEST AT THE JOSLYN ART MUSEUM IN OMAHA.

From 1833 to 1834, the explorer and naturalist Prince Alexander Philipp Maximilian of Wied-Neuwied, Germany, traveled on a 2,500-mile journey into the American Interior, generally following the path of the Lewis and Clark expedition (1804-6). Maximilian was accompanied by the Swiss artist Karl Bodmer, whom the prince had hired to record the cities, rivers, and people they saw along the way. Maximilian and the 23-year-old Bodmer left St. Louis in April 1833 and went by steamship and keelboat up the Missouri River, traveling as far as Fort McKenzie, Montana. Among the hundreds of images Bodmer created were remarkable likenesses of Native Americans, which memorialized not just their culture and artifacts, including clothing and weapons, but their individual personalities and life stories.

Among Bodmer’s notable portraits is that of Mató-Tópe (Four Bears), painted at Fort Clark, North Dakota, during the winter of 1833–34. Mató-Tópe was a highly respected military and religious leader among the Mandan. Bodmer shows the chief formally attired in a shirt of bighorn sheepskin elaborately trimmed with ermine tails, locks of hair, and strips of quillwork outlined in beads. Mató-Tópe’s headdress, with its long trailer of eagle feathers, probably signified the combined battle coups of a war party or men’s warrior society. The lance in his right hand was said to have been used to kill an Arikara who had murdered the chief’s brother, its shaft afterward decorated with the enemy’s scalp stretched on a hoop.

The prince and the artist spent over a year among the tribes of the Upper Missouri, recording the Mandan, the Hidatsa, the Sioux and the Blackfoot. Years after the conclusion of their expedition, many of Bodmer’s works were adapted as hand-coloured engravings to illustrate the 1840 Prince Maximilian's book entitled Maximilian Prince of Wied's Travels in the Interior of North America, which documented the Native peoples, natural history, and fur trade of the High Plains. Bodmer’s watercolors became the first truly accurate portrayals of the far western American Indians to reach public view and to depict dramatic landscape that was still unfamiliar to audiences in the eastern United States and Europe.

The Maximilian/Bodmer Collection, which also contains the Prince's illustrated journals, is notable not only for Bodmer's artistic achievement, but as an invaluable historic record of the American West at a pivotal historical moment. His watercolors capture the dramatic topography of the Missouri River, focusing on the landscape from Nebraska to present-day Montana, as well as offering a first-hand account of the American Indian tribes that lived on the High Plains.”

HOW THE MUSEUM CAME TO BE: A WIFE’S TRIBUTE TO A HUSBAND CREATES A MASTERPIECE OF ART DECO.

Married in 1874, New Englanders George and Sarah Joslyn came to Omaha in 1880 when George took a job with a newspaper company. Throughout their long marriage the couple gave generously to Omaha’s civic institutions and after her husband’s death Mrs. Joslyn built the museum as a memorial to his memory. The Joslyn Art Museum, which opened on Nov. 29, 1931, is a jewel of Art Deco. The three-level interior is decorated with 38 different kinds of marble from around the world and the exterior walls are finished in Georgia Pink (Ethowa Fleuri) marble. Native American themes are expressed throughout the museum interior and Moravian floor tiles used in a Fountain Court include symbols for literature, music, architecture, and painting.

The Joslyn Art Museum is located at 2200 Dodge St. Omaha, NE. For more information, visit www.joslyn.org or call (402) 342-3300. The museum is located near the confluence of the Missouri and Platte rivers, within miles of the route followed by Prince Maximilian and Karl Bodmer. Admission is free.

The Joslyn Art Museum in Omaha, Nebraska is home to the largest known collection of Swiss artist Karl Bodmer's watercolors, drawings, and prints. From 1833 through 1834, Bodmer accompanied German explorer Prince Maximilian zu Wied-Neuwied on a 2,500-mile expedition from St. Louis into the High Plains of the Dakotas and Montana. Among the pieces in the Joslyn collection is Bodmer’s 1834 watercolor on paper portrait of Mandan Chief Mató-Tópe (Four Bears).

Susan Cohn is a member of Bay Area Travel Writers; the North American Travel Journalists Association; and the International Food, Wine & Travel Writers Association. She may be reached at susan@smdailyjournal.com.  This story first appeared in the San Mateo Daily Journal.