Three Sisters at The Hypocrites 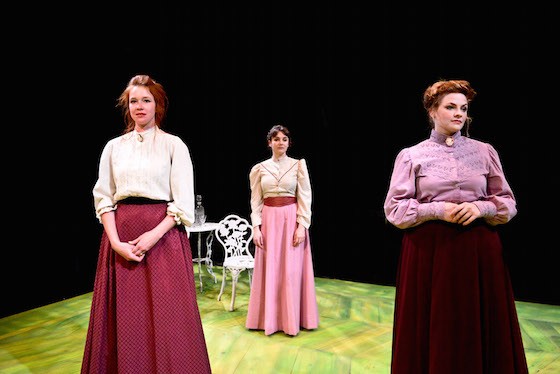 Anton Chekhov's 1900 play Three Sisters is considered one of his masterpieces and The Hypocrites do it justice in their fine new production. The play is heartbreakingly sad and yet occasionally funny, with intimations of changes to come in Russia. One character says, "Violent change is at the door, the people are marching, and a real rain is coming to wash away the laziness, indifference and neglect that we've let define us. The time has come for all of us to either bend our backs in labor or be left behind forever."

Director Geoff Button adapted Chekhov's script to use more modern language without trivializing it or breaking the mood of the story. Both his adaptation and direction are very strong. The eponymous Prosorov sisters lead the excellent 14-person cast in a story that progresses over several years in a provincial Russian town at the turn of the 20th century. The sisters, all in their 20s, yearn to move back to Moscow, which they left 11 years ago when their father assumed the command of a brigade in the rural area. Now their father is dead and the town is dominated by the presence of the military base and its officers.

Will the sisters ever get back to Moscow? Probably not, because they keep making life decisions that will keep them in the stifling rural atmosphere.

Olga, the oldest sister (Mary Williamson), says, "I can still feel the warmth of the Moscow sun. Now when it's sunny like this, the need to get home burns inside my chest." Olga is a schoolteacher and fusses maternally over her siblings.

Irina, the youngest (Hilary Williams), waxes poetic about work and hopes for love. Masha, played by Lindsey Gavel, provides the most telling emotional performance. She's married to Fyodor, a schoolteacher (D'Wayne Taylor) but falls in love with Colonel Vershinin (Vance Smith), the new battery commander, who is married with children.

Their brother, Andrei (Joel Ewing) sees himself as a scholar and academic, but life gets in the way. The sisters assume he'll become a professor in Moscow. Instead, he falls in love with and marries Natasha (Erin Barlow), a local women. In scene two, they're living in the Prosorov home and frictions begin.

William Boles' scenic design and Jeremy W. Floyd's costumes contribute handsomely to the mood and progress of the story. The opening scene, set in the Prozorovs' dining room, is set in shades of burgundy, red, rose and purple. The costuming follows the same color palette for the Prosorovs and the officers' uniforms as well, which are rendered in burgundy. In Natasha's first appearance, she wears a wide lime green belt with her rose-colored dress and the sisters comment upon its oddness. In scene two, lime green begins to encroach on the set décor and takes over Natasha's and Andrei's costumes. The color becomes a symbol of Natasha's spitefulness, as she gradually dominates the sisters' household and bends Andrei to her will. If this was a Disney story, Natasha would be the evil stepmother. More and more green appears in the house and garden, but still the sisters wear rose and burgundy.

The sisters get involved in new activities. Irina works at the telegraph office but doesn't like it. Olga is promoted to headmistress and lives at the school. Masha yearns for her lover and spends time with Vershinin whenever she can. And they all still believe they will one day live in Moscow. But Vershinin says, "When you are back in Moscow, you'll take Moscow for granted too. We want things, we get them, we turn them to dust in our hands. What we want is the wanting."

At the end, the military base is closing and the officers come to say goodbye. As the sisters grieve, Olga says, "We will go on, we will endure, we will strain and we will struggle, and someday soon somebody will know why. But, my God, if we only knew why...."

Occasional period music is heard during the play, but before the performance and during intermission, we hear recorded songs of the time such as "She Was Only a Bird in a Gilded Cage" and "Oh, You Beautiful Doll." Although the music reminds us of the era, the song choices seem incongruous.

Chekhov's four-act play is adapted to two acts and runs 2 hours and 20 minutes with one intermission. The playwright, who also wrote dozens of short stories, is considered one of the modern masters of storytelling. In addition to Three Sisters, three other plays are his most important works for the stage: The Seagull, Uncle Vanya and The Cherry Orchard. He died of tuberculosis at 44 in 1904.

The Hypocrites' production of Three Sisters continues at the Den Theatre mainstage, 1329 N. Milwaukee, through June 6. Performances are Monday, Friday and Saturday at 8pm and Sunday at 3pm. Tickets are $28 and can be bought online or by calling 773-525-5991.