View One of Summerscape's Most Delicious Productions 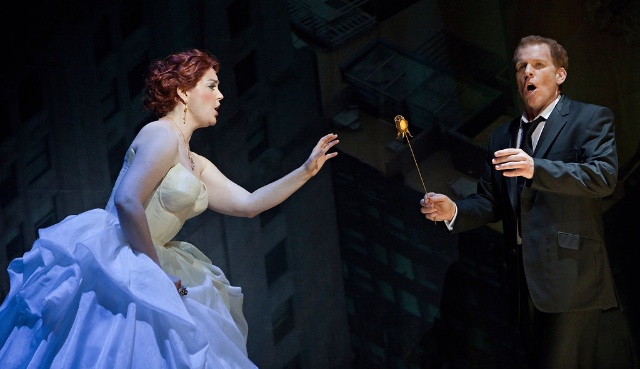 Leon Botstein, one of America’s leading educators, conductor of the American Symphony orchestra and producer of Summerscape, an annual program at Bard College, mounts an enticing production of Die Liebe der Danae.

Botstein is always introducing undervalued and underexposed works. In his mounting of Danae, he has made a very strong case. The production was directed by Kevin Newbury with the delightfully light touch Strauss kept demanding from his not entirely satisfactory librettist. “Lighter, lighter,” Strauss would remind Gregor. “Thanks for the dispatch. It has lots of good things but is not nearly light enough for me and there are several obscurities… It must be clearly stated that Jupiter, like Wotan, is terrified of his wife. That’s why he comes transformed to his women, so his wife won’t recognize him fooling around.” Newbury succeeds in presenting the dramatic arc of a gold-smitten girl turning into a woman.

Botstein spoke of Strauss’ glorious music, and of his harmonies based on 24 keys, not 12. Strauss himself noted that “grey-brown are the colors of the creditors and debtors choruses.”

On stage, after the chorus of creditors strips bankrupt King Pollux of his goods (which drew uncomfortable laughs from an audience fully aware of just such a scene going on in Washington that afternoon), Danae appears stretched out on her bed, dreaming of gold, her great passion. Pollux’s daughter has to marry the debt solution, a rich man. Fortunate that her passion for gold will make this an apparently seamless task.

Strauss thought that ancient Greek myths were a good way to present contemporary problems. Other creative artists have married the myths of Midas and Jupiter as he did. Much of the confusion of who is whom in Danae, for instance Midas is Jupiter’s messenger and stand-in, are cleared up in Kevin Newbury’s direction, a not easy task. Cityscapes abound in projections, multiple portraits of the beautiful Danae, and finally her mature choice of love over money is presented on stage with visual delight and surprise by Rafael Vinoly and Mim Lien.

The artists who sing this challenging opera are not only brave to undertake roles which reach both unusual highs and lows in the vocal range, but they are also learning roles which are not now in high demand. As Danae, Meagan Miller, recipient of multiple awards and clearly on the cusp of a big career, showed us why. She has an even range and secure top, all based in a compelling stage presence. Her lovely vocal lines arched over the orchestra, after some sense of balance was achieved between the pit and stage.

Strauss considered this music among his very best and the Bard performance honors the composer.

Roger Honeywell, a young heldentenor who sang Midas with the perfect ping and a large, dynamic tone, seems poised to fill the current gap in this voice category. He has trained as an actor, and brings both glamour and an appropriately piercing voice to the role. Among the four queens who trail Jupiter on stage, teasing him and driving his Fricka-like wife mad, the mezzo Rebecca Ringle was riveting. All four queens, frolicking throughout, delight in their quartets. The cast and chorus deserve call outs.

There is some debate about Strauss’ musical and dramatic comment on Wagner. Botstein thought Strauss was making fun of his predecessor. There are clear and reverential references to Wagner motifs. Was Wagner any less concerned about human resolutions than Strauss? Debatable I would think. Both Wotan and Jupiter have problems with domineering wives. Both gods are lonely. Desire for gold and the problems that ensue inform both composers’ works. Die Liebe der Danae has a happier ending.

This Strauss opera deserves a higher place in the Strauss pantheon than it now holds. Botstein makes this case brilliantly.