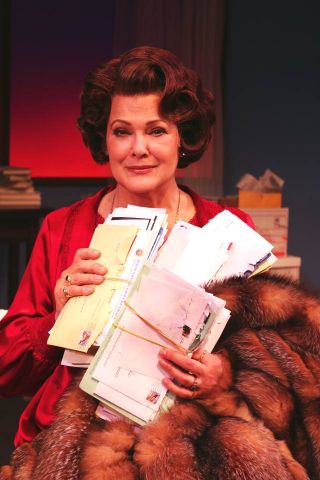 When one has 60 million readers and followers across the globe freely sharing their personal feelings and secrets in public with Ann Landers, the famous advice columnist of the Chicago Sun-Times newspaper, one has to have a great deal of trust in the gatekeeper of that information.

Coyote StageWorks, one of the desert’s premiere Equity Theatres, presents the final production of its 2017 season with the smart, funny, and engaging comedy “The Lady With All the Answers” now on stage at the Annenberg Theatre in Palm Springs. The multi-talented actor/writer/singer and philanthropist Gloria Loring stars as Ann Landers in this one-woman show creatively written by television writer and producer David Rambo; and once again, is staged by Coyote StageWorks award-winning director Don Amendolia.

“Ann Landers” was the pen name of Eppie Lederer, who wrote an advice column for one of Chicago’s leading newspapers. Ironically, her twin sister Pauline Lederer, wrote her advice column “Dear Abby” for the Chicago Herald American newspaper. The sisters were close but when it came to their columns, each were tigress’ defending their turf.

Coyote’s co-founding artistic director and actor Chuck Yates, has the golden touch when it comes to selecting a season of plays. There have been so many memorable productions over the last eight years from this highly talented organization who perform, musicals, (“The Andrews Brothers”), comedies, (“Art” and “Boeing- Boeing”), solo tribute biographies (“Tru”), and dramas (“Agnes of God”), are among my personal favorites, all garnering Desert Theatre League Awards in the bargain.

There is always the risk of not meeting the expectations of the audience or failing to engage the audience when the production is a solo effort. Plays that have repetitive dialogue hooks tend to fall into “and then I wrote, or then I played” category, allowing the audience to drift away from the playwright and the performer’s main thrust of telling a compelling story in a fresh and enjoyable way.

Fortunately, this issue is a non-issue at the Annenberg Theatre. “The Lady With All the Answers,” has plenty of interesting mini-stories to tell, thanks to Ann Landers’ forty some years of corresponding with her millions of readers dispensing witty and insightful gems of wisdom when answering those letters. The beauty and enjoyment of this production boils down to the clever crafting of how to make those reader’s letters come theatrically alive and connect with everyday situations that people all over the world recognize. Playwright Rambo is a seasoned television writer and producer who knows how to reach an audience. His “CSI: Crime Scene Investigation” television series has been a staple on CBS-TV for several seasons.

I had the opportunity to chat briefly with him after the opening-night performance. When I asked him how long the research process took to curate and reduce her columns into a professional play format he replied, “it was just about a year,” adding, “how much he enjoyed the wonderful cooperation from Margo Howard, Eppie’s daughter who took over the column after her mother died in 2002. “The Lady with all the Answers,” has been produced by more than 200 theatrical companies to date. The success of the play is definitely a case of ‘inquiring minds want to know’.

The Coyote StageWorks production is fortunate to have Gloria Loring, one America’s iconic actors in the title role. She is known to millions via her 600 episodes of “Days of Our Lives” daytime television show. Ms. Loring brings a fresh, snappy, and a delightful interpretation of Ann Landers in her heyday.

Director Amendolia, is right at home helming “Lady” despite it’s being a solo comedy turn. This is the director, remember, who brilliantly guided the powerful drama “Agnes of God” to a Desert Theatre League Desert Star Award in 2016.

No first-rate theatre production can survive without the specialized talents of the creative people who add magic touches to the necessary technical components that transfer a production into a total winning theatrical experience. The set designed by Josh Clarbaugh, and the lights and sound designed by Moira Wilke, lend comfort and warmth to the Lake Shore Drive apartment in Chicago’s Gold Coast neighborhood where Eppie works at night.

The costume designs of Bonnie Nipar light up the stage, especially the Ruby-Red peignoir in Act II. Ms. Loring seemingly glides, as if on air, when she crosses the stage. Quite an effect. The Wig designed by James Gier, from certain angles in the audience, gives Ms. Loring a young, raven-haired, California Senator Dianne Finestein-look. And keeping this excellent production on its toes from a backstage perspective is stage manager Blanche K. Mickelson.

“The Lady with all the Answers” is a splendid production that performs at the Annenberg Theatre, Palm Springs, and runs through to Sunday, April 23, 2017.