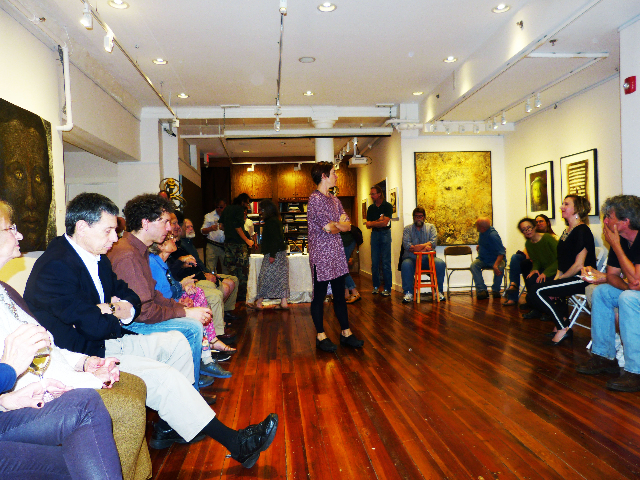 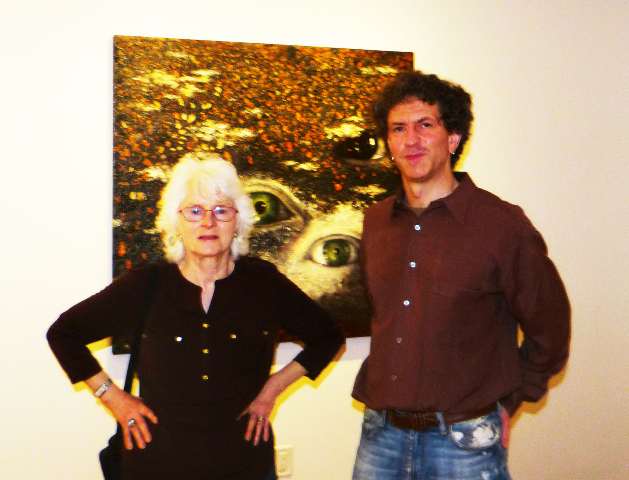 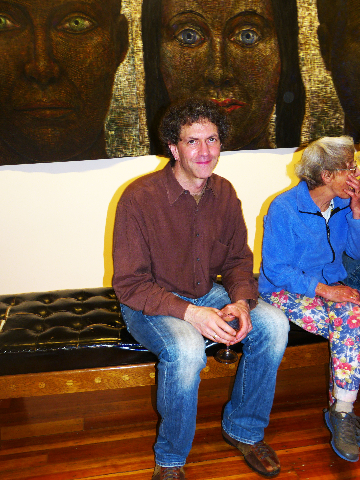 Swift has brought serious contemporary art back to Cape Ann 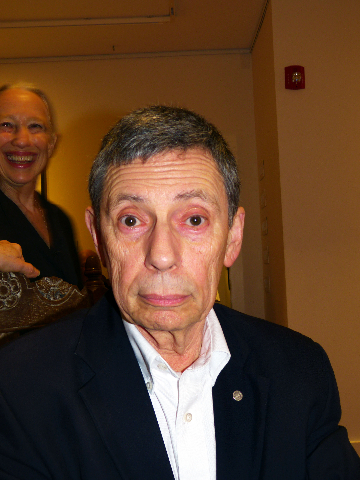 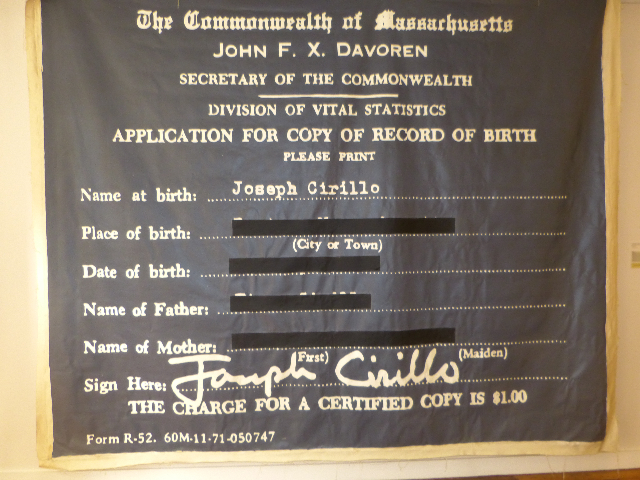 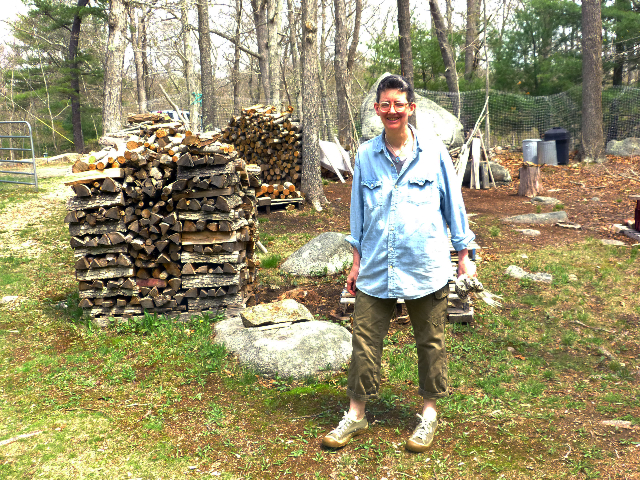 In the woods with Gabrielle Barzaghi. 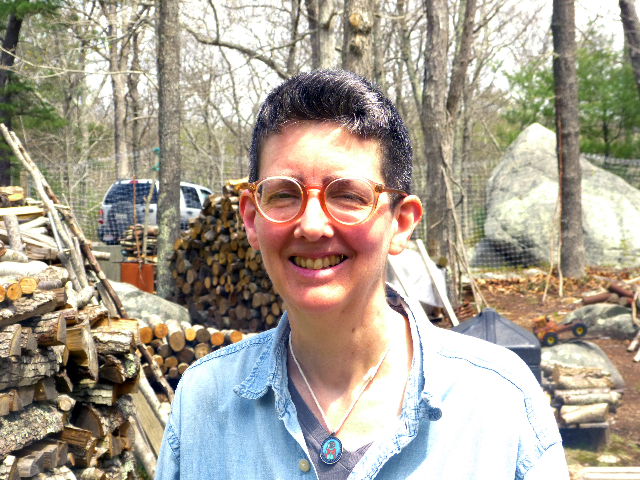 She will solo at Trident Gallery in June. 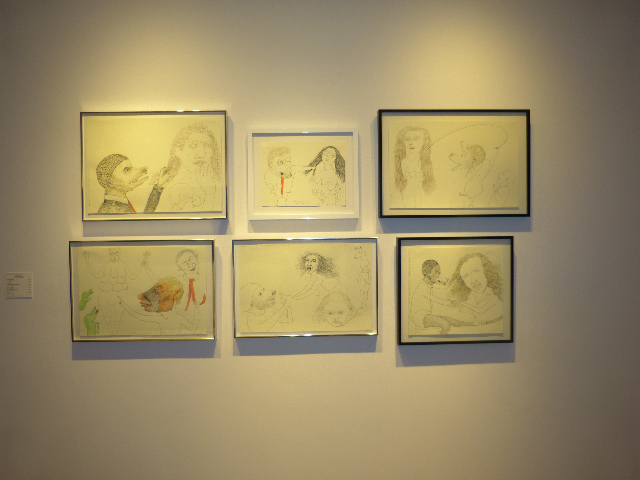 Barzaghi's works inspired by the sexism of Trump. 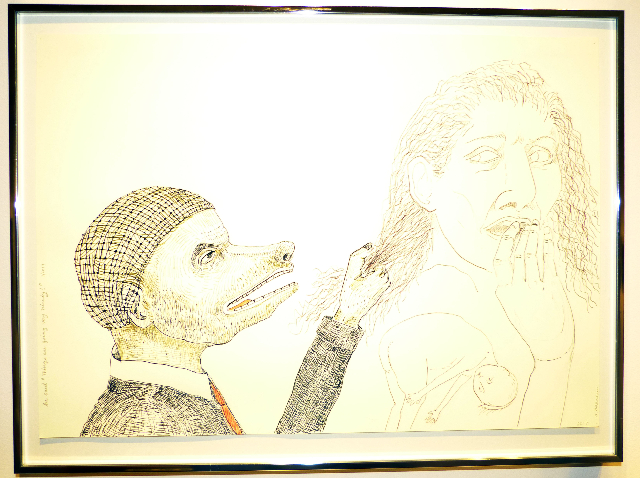 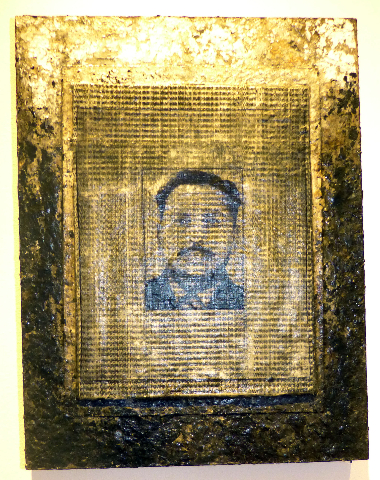 Lamenting the disappeared by Erony. 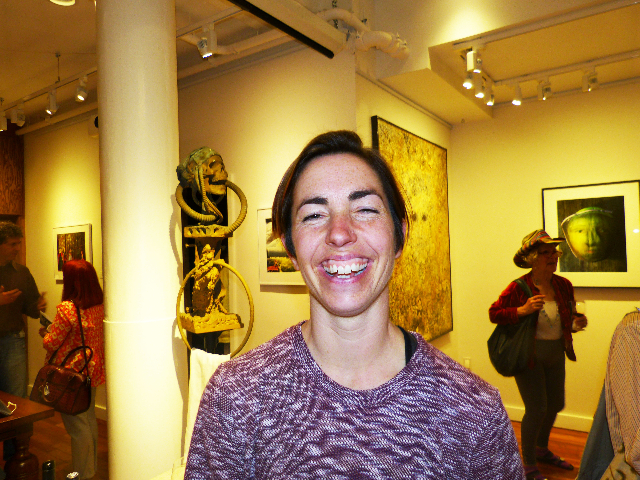 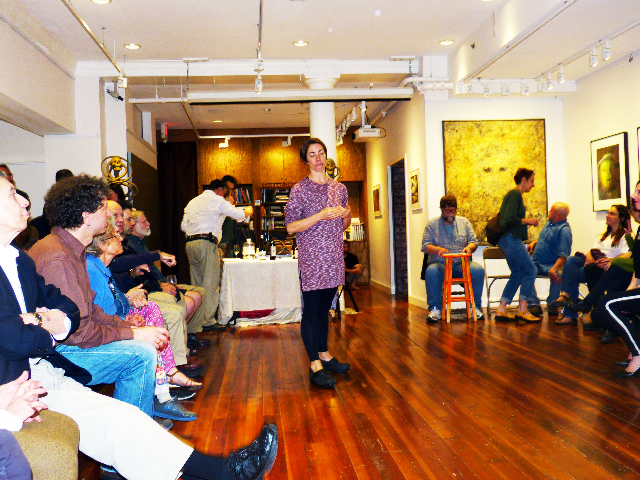 For the past several years, when visiting Gloucester, we check out the exhibitions of Trident Gallery in the heart of town on Main Street.

As luck would have it we were able to attend the closing party for the special exhibition The Political Body which featured work by several of our artist friends.

During the modernist era Cape Ann was home to many notable American artists. When I was a teenager, growing up during summers in Annisquam, the avant-garde had long ago stopped visiting an ever more traditional and conservative artists’ colony.

Not to say that serious artists weren’t around it is just that they were virtually invisible. There was, however, a plethora of tourist orientated bourgeois art.

Through the commitment, energy and vision of founder Matt Swift his Trident Gallery has become the matrix for fresh and vital contemporary art.

As we pleasantly experienced his commitment to the fine arts is augmented by the performance programming organized by his distinguished dancer spouse, Sarah Slifer Swift.

In the age of Trump, there have been all too many knee jerk responses to his assaults on reason by well intended artists of all disciplines. More often than not the new agit prop is no better than the outdated and mostly strident old agit prop. Most of this work, old and new, wears its heart on its sleeve and sings to the liberal choir.

The surprise, indeed thrill of this show, is that it actually comprised a mix of new and vintage works.

Decades later, for example, it was astonishing to revisit identity based work by the artist/ spy Jay Jaroslav. I had first encountered this series of photo realist blowups of birth certificates at Boston’s legendary Atlantic Gallery run by punk rockers, Jeff and Jane Hudson, now dino artists in the Berkshires.

As Jay explained to me the paintings, in two series, evolved from the thirty or so identities he created while in deep cover as an operative. His true identity was known only to a CIA handler. "He died a couple of years ago in his 90s and was my best friend."

The work, which landed him in court with hefty potential time in the cooler, received little critical attention. It proved to be a precursor of the redacted documents series by Jenny Holzer which has been featured globally as well as at MASS MoCA

We also were delighted to revisit excerpts from The Disappeared series by Susan Erony which refers to dissenters who were arrested and murdered in Latin America particularly after the assassination of the duly elected leftist Allende in Chile.

The pleasure of their evocative art is that it is conceptual and oblique. By not being in your face it allows the viewer to delve into the what and why of the images. It is always more rewarding when one has to make an effort to comprehend and absorb horrific issues which do not just blow up on us. With Erony and Jaroslav the ideas explode in our subconscious once we glom onto them.

Deep in the woods of Dogtown, that morning, I visited the studio of Gabrielle Barzaghi. We had known each other as colleagues for decades but this was our first real dialogue. She is somewhat of a hermit and like Thoreau is reluctant to have visitors.

We looked at a series of works inspired by Charlotte Bronte who had a rock thrown at her head by a rude boy she was tutoring. These evocative and fascinating drawings will be shown at Trident Gallery in June.

As a preview of the event last night she told me of being furious about Trump and the revelations leading up to his election. In particular, she was provoked into responding to his outrageous remarks about sexual assaults on women.

The resultant drawings were featured in Swift’s exhibition and their rage fills the room. Astrid commented to her about the foul language in the titles. Gabrielle responded that they were direct quotes from our esteemed President and Commander in Chief. Oh my.

Before 7 PM folding chairs were set up on either side of the gallery creating  a grande allee for the center space.

With deliberation allowing for audience reaction a narrator recited seventeen points. We were told to close our eyes and conjure a variety of sounds from animals and birds to the footsteps of a friend or loved one.

Following “Sonic Images” by Pauline Oliveros there were groups, pairings and solo improvisations by several dancers. There seemed to be a separation between male and female dancers. Men danced with men and women with women.

There was no music other than the sounds in our heads evoked by the reading. It was a pleasant surprise and relief when a woman, cutting a dramatic presence in spiked heels, bowed a saw arched from a seated position. She manipulated the carpenter’s tool to create hauntingly eerie sounds. The dancers responded accordingly.

Anchoring the evocative improvisations Swift was joined by a male partner. He soon faded leaving her alone. She executed a variety of movements including ending up prostrate and motionless on the floor. It was a position from which she emerged in arching, body extending intervals.

Seemingly on a whim she grasped a bottle of Pellegrino from the bar. She took a sip and then placed it on the stool of the narrator. Seemingly abandoned she later returned to it. Moving down one side of the allee she stopped at several intervals, and with exaggerated sound, took gulps from the bottle.

At the end of the allee she turned and faced its length.

Bending down she placed the now empty bottle sideways on the floor. She gave it a slight nudge in a gesture like bowling or putting.

We were surprised and delighted as the bottle made its way past us. At about mid way it slowed to what we assumed to be a stop. But then it gained momentum and there were several more seeming pauses and lurches forward.

There were gasps as though watching a golf tournament and the ball inching to the cup.

The bottle trick evoked a burst of exuberant applause.

After this astonishing climax to a remarkable evening I asked if she had rehearsed the bottle stunt.

With a laugh Sarah responded “It was a miracle.”