New Production Sizzles at the Academy of Music 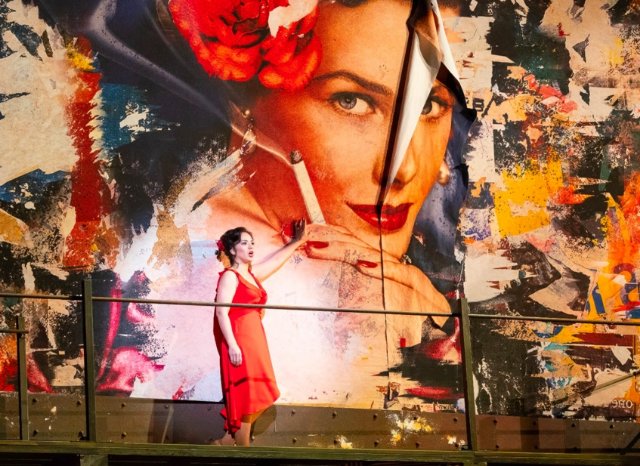 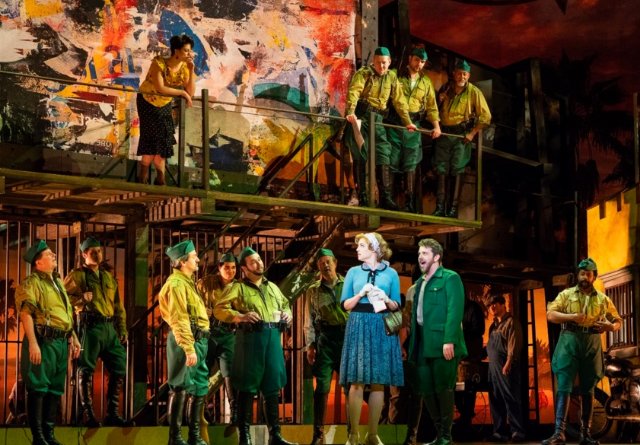 Kirstein MacKinnon arrives at the guardhouse with a message for Don Jose. 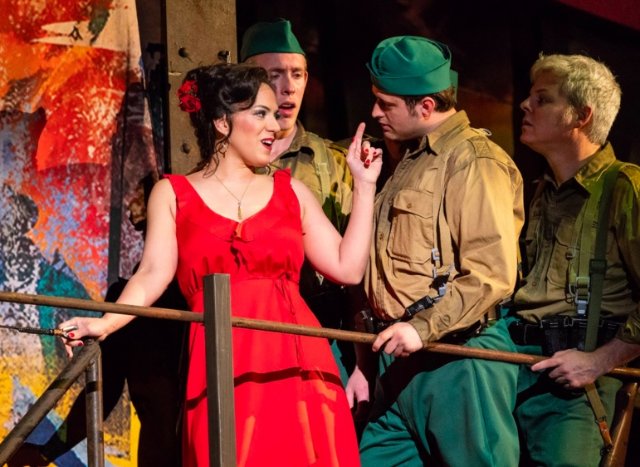 Everyone wants Carmen, in a dramatic portrayal by Daniela Mack. 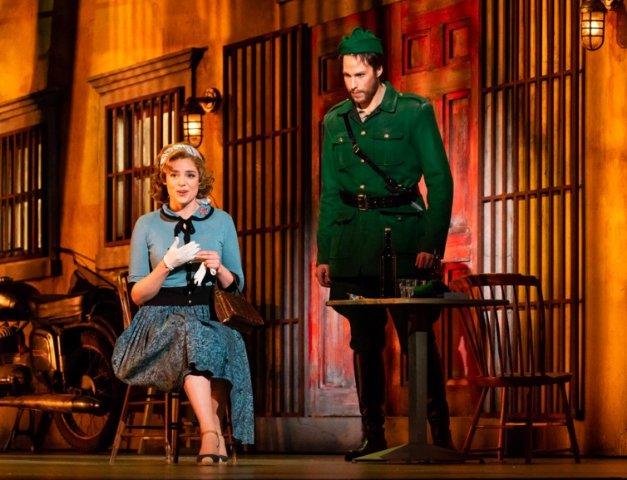 Micaela and Don Jose have voices that blend perfectly. Kirsten MacKinnon and Evan LeRoy Johnson in the roles at Opera Philadelphia 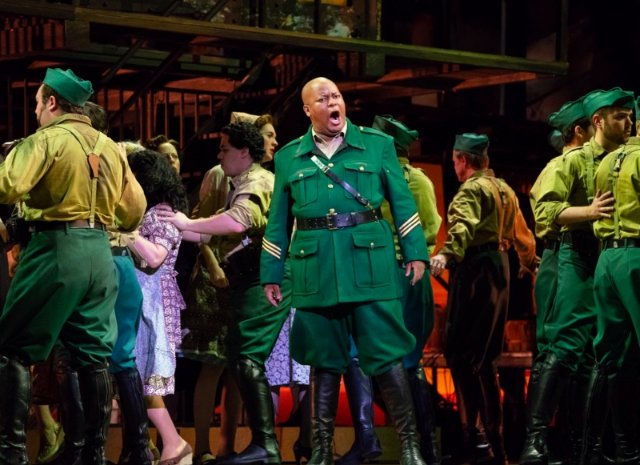 Musa Ngqungwana, head officer, will sing beautifully to make his claim on Carmen. 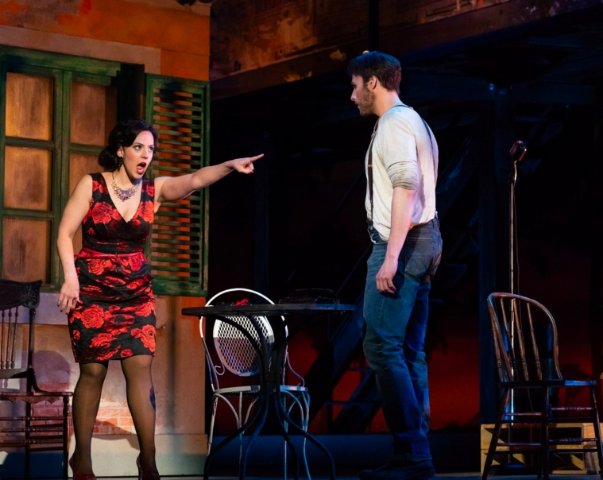 Don't you dare, sings Carmen. If you love me you will desert your troops and come to the mountains. 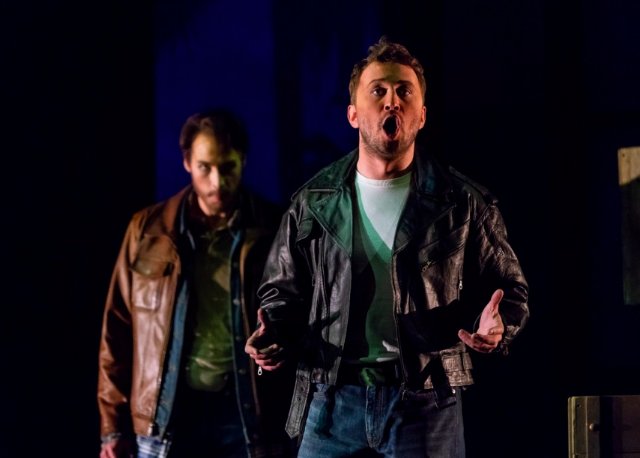 Adrian Timpau as Escamillo makes his claim on Carmen in a big, forceful bass-baritone. He knows the romance can not last, but wants her anyway. 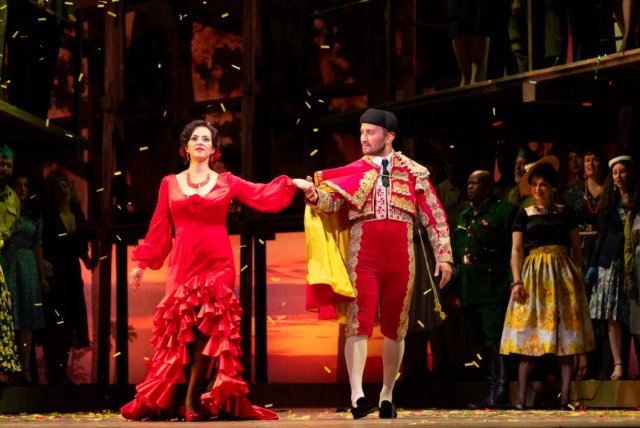 Escamillo presents his love, Carmen, in the bull ring. 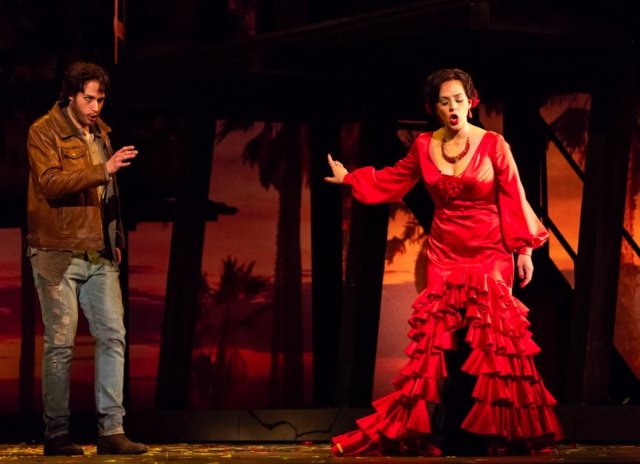 Carmen would rather die than join a man she does not love.

Carmen has arrived in all her glory at the Academy of Music in Philadelphia. Heralded by digital billboard signs on highways and byways around the city, and topping off the PECO Building in downtown Philadelphia, the news is being broadcast. The Academy has been packed. This new production by Opera Philadelphia and its partners in Seattle and Ireland, is smashing.

First we are greeted by a curtain with the opera’s name in giant letters, drawn as Robert Rauschenberg might have. The curtain opens on a James Rosenquist billboard stretching across a second floor balcony in Seville. Carmen, as beautiful as an Ivory soap mother, but smoking a cigarette, dominates the town square.

When the cigarette factory closes for the day, the workers come on to the square. Everyone awaits Carmen. Taking off her apron to reveal a bright red dress, with a flared skirt to swoosh as she moves, Daniela Mack, the town’s latest Carmen, arrives.

From the moment the first chords of the overture are played, we are struck by Bizet’s subtle use of color and timber in this score. Phrases underscore the singers’ lines but are also used to converse with them. Drums provide both a military beat as members of the troops housed in Seville enter the drama and also reveal an ominous prediction. Yves Abel conducts the Opera Philadelphia Orchestra to realize all of the pleasures of the score.

In tandem with the director, Paul Curran, many apt dramatic punctuations join the stage proceedings to emphasize musical ones in the pit. This doubling appears in exits, but also in gestures from the singers on stage. Mack often punches out and strikes the men who would have her. She has lessons for the #MeToo generation, although one does not wish the outcome of her actions for anyone. The multiple elements running simultaneously are a draw for the opera form. In this production, they are realized with tantalizing style.

The most unusual setting transfers the smugglers' hideaway in the Andalusian mountains to an ominous, deserted warehouse. An old bread factory in Lisbon has this feel. It served to clarify the scene in which Don Jose, now not simply smitten by Carmen, but obsessed with her, guards the stolen goods. Micaela, Don Jose’s mother’s choice as a mate, arrives in the dark warehouse in a sad and dark moment.

Micaela, in this take on the opera, is a much more complex character than her usual portrayal. No sweet, goodie goodie here. Kristin MacKinnon’s voice is not simply lyric. It has substance and emotional weight. MacKinnon succeeds in portraying a character who is not simply good, but in love with a man who is slipping away from her. Frustration leading to desperation takes over the voice in compelling style.

As the object of her love, and for a while Carmen’s too, Evan Leroy Johnson is a star. From his first duet with MacKinnon and his first Act Flower aria, his voice is full of drama and slices with just the right force into notes and phrases. He is also an actor. The force of his love is sung phrase after phrase as the opera unfolds.

Director Curran has succeeded in making this an opera of action. It is very physical, which reflects the character of Carmen and the story as it unfolds.

Curran and Abel propel the story forward at a brisk pace, which perfectly captures the inevitability of Carmen’s fate. Mack sings it with force when she reads her Tarot cards, “Death,” and a violent one at that.

The entire cast sings beautifully. The staging is arresting. Carmen has arrived in Philadelphia, hot and ready for action.