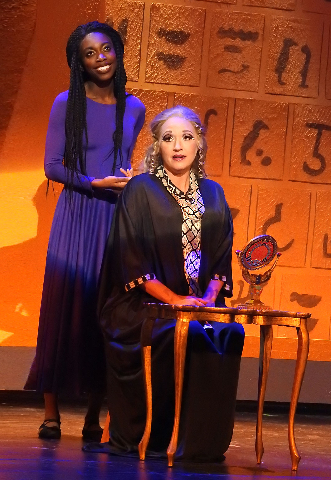 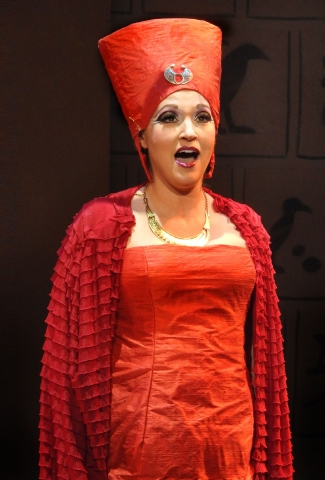 “Love Transcends Death” is a poem by Naoimh Spence, but it’s also a powerful premise in several theatrical shows, including “Elton John and Tim Rice’s Aida,” a heartfelt, touching tale of honor, loyalty and forbidden love which is receiving a remarkable production by the Carbonell Award-winning, Ft. Lauderdale-based Slow Burn Theatre Company to end its 2016-17 season.

Those mid-production standing ovations heard during a recent performance were well-deserved.

Under Patrick Fitzwater’s sensitive direction and smart staging it features a depth of palpable, authentic emotion that renews our belief in the power of live theater to viscerally move us in ways that film and television cannot.

Slow Burn Theatre Company has found a star shinning as bright as a supernova in Kahlifa White, who plays the title role in this early 2000s musical, originally produced by Disney Theatrical Productions and the winner of four 2000 Tony Awards.

White’s vocal power and ability to convincingly and seemingly effortlessly convey a range of emotions is evident in this tale of a Nubian princess sold into slavery and forced to choose between allegiance to her people and devotion to the Egyptian soldier whose country enslaved them.

You especially sense the devotion Aida and her fellow citizens feel about their homeland in the song “The Gods Love Nubia,” a Gospel-flavored anthem. The actors’ eyes are shut tight and their arms are extended, as though they’re in the midst of intense prayer. They are being moved involuntarily by a spirit neither we nor they could see if they opened their eyes. There’s a “Les Miserables” like sense of solidarity and passion during the performance of this number. You get the feeling these enslaved people love their country with such fervor, they’d gladly die for it.

With tender voices, at least one gentle kiss, and soft caresses, White and the Egyptian soldier, Radames (an excellent Stephen Millett) also convince us their love is something special. In the end, a la "West Side Story's" Tony and Maria, not even the threat of death can break them apart. In fact, it strengthens their bond. Radames’ words soon before the final curtain are some of the most powerful one will hear in theater.

If I have to search through a thousand lifetimes I will find you.

The line is spoken with touching sincerity by Millet. He excels all around in the role, at first menacing and dictatorial, later imbuing Radames with a rebellious streak and then his toughness melting into sincere, soft but forbidden love for Aida.

In addition to her strong capacity to love and her purity, part of what endears us to Aida is her devotion, effect on people and assertiveness.

White’s Aida stands tall, defiant, with an inner strength and pride which never turns into arrogance.

At one point, before they fall in love, Aida’s tasked with scrubbing Radames’ back. She’d already proven her resolve by breaking free from the chained slaves, grabbing a sword and threatening Radames.

The following exchange comes while Aida is scrubbing Radames’ back.

Radames: You’re much better with a sword than a sponge.

Aida: I wish I had a sword now!

White says this line forcefully and without a moment’s hesitation. We feel happy for this royal woman, unjustly stolen from her country, chained up as a slave, but a daring woman ahead of her time – one who won’t stand to lose her dignity or that of her country.

During another scene, White’s Aida walks ahead of a servant ordered to take her somewhere. She takes off before him and the servant is forced to run to catch up. We can’t help but admire the chutzpah of Aida.

White also deftly conveys a more vulnerable aspect of her character in the song “The Past is Another Land” in which she sings of a painful realization.

The past is now another land
Far beyond my reach
Invaded by insidious
Foreign bodies, foreign speech
Where the timeless joys of childhood
Lie broken on the beach

But the indomitable quality of this remarkable woman still shines through in the song:

Our knowledge, our wealth

In bleeding us dry, you long for our spirit

But that you will never possess.

“Aida” is blessed with two strong female characters, the other being Amneris, princess of Egypt, daughter of the Pharoah and Radames’ fiance.

Along with Radames, Amneris undergoes a big emotional change –thanks in part to Aida, who has the capacity to better others. Amy Miller Brennan deserves kudos for seamlessly transitioning from a self-absorbed, narcissistic, sarcastic, bratty princess to one of caring sensitivity. In the beginning, Brennan enunciates with just the right tone to ensure her biting sarcasm lands like a dart in the chest of Aida. As the production progresses, Brennan’s tone softens and becomes more sympathetic, conveying a sense of mercy while retaining an air of authority when she sentences Aida and Radames to death.

Amneris opens the musical, singing the memorable “Every Story is a Love Story.” There’s a mysterious, almost otherworldly quality to the song, setting the tone for the fantasy. The non-realism is enhanced by lighting designer Thomas M. Shorrock, who bathes the stage with a variety of colors, some appropriate, some questionable, and sharply focuses the performers.

The musical opens in a modern-day museum, designed stately with tall columns by scenic designer Sean McClelland, whose handsome sets convey majesty. Within the museum, ancient history comes alive. The story flashes back to ancient Egypt before ending in the present-day museum.