Turner at the Frick 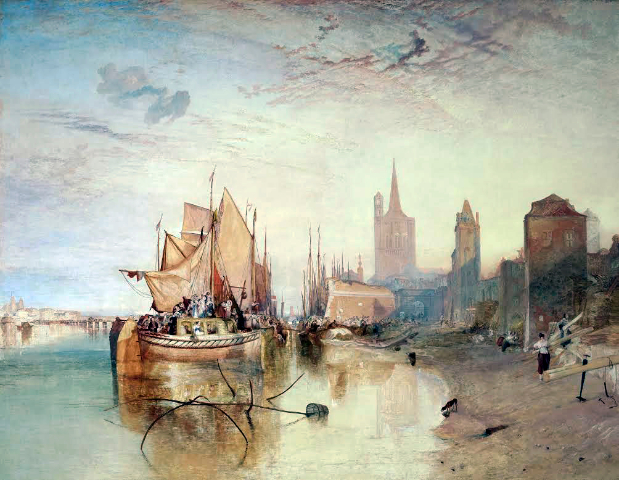 Cologne the Arrival of the Packet Ship. Courtesy of the Frick. 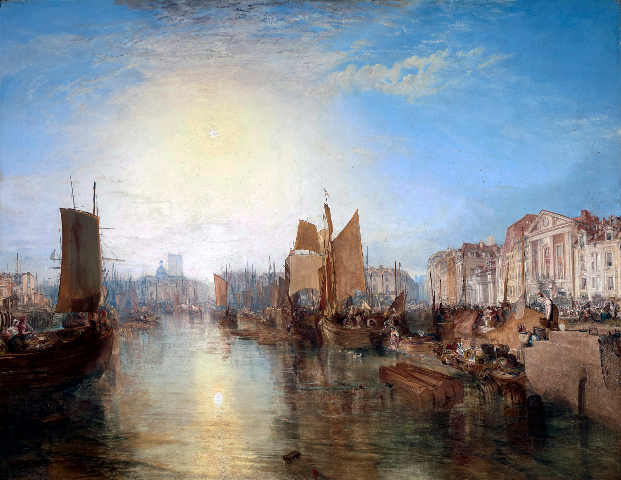 Known as the Painter of Light, Joseph Mallord William Turner, 1776 – 1851,  considered by some critics as controversial in his day, now is regarded as the artist who elevated landscapes to rival history painting. He is renowned as one of Britain’s greatest artists. A beautifully presented exhibition built around works from The Frick Collection,  Turner’s Modern and Ancient Ports: Passages through Time, brings together 37 water colors, drawings, engravings, sketchbooks and oil paintings, from 1817 – 1845, a turning point in the artist’s career.  Turner, no longer interested in matching nature’s palette, moved towards a more luminous, translucent effect when applying the brush.

The focal point of the exhibition are six grand paintings, presented in the Oval Room of The Frick; three of which are landscapes of Continental Port scenes, and three are history painting depicting scenes from antiquity.

At a time when landscape painting was held in little regard, Turner created these three monumental canvases, Harbor of Dieppe: Changement de Domicile, 1826  (The Frick Collection);  The Harbor at Brest: The Quayside and Chateau, 1826 – 1828  (The Tate, Britain);  and Cologne, the Arrival of a Packet-Boat: Evening, 1826 (The Frick Collection).

This is the first time the three paintings have been brought together since they left his studio.  Both, Harbor of Dieppe and Cologne, the Arrival of a Packet-Boat, were purchased by Henry Clay Frick more than a century ago, and usually hang in the west gallery, surrounded by old masters such as Rembrandt, Van Dyke and Velazquez. Now we see these paintings in a new context.  The Harbor of Brest, the third painting in the trio, is from The Tate, London, and part of the Turner bequest.

Both Dieppe and Cologne were exhibited at The Royal Academy in the late 1820s, and later purchased by the collector John Broadhurst.  The Harbor of Brest, commissioned by Broadhurst, was to be the third painting in the trio of continental port scenes.  However, Broadhurst fell on hard times and Turner never completed the commission.  The unfinished canvas sat in the artist’s studio until his death in 1851 and ultimately became part of the Turner bequest.

It was neglected for years until  re-discovered by the then director of The Tate, Sir Kenneth Clark in 1943, who was clearing space for an air raid shelter.  Clark came upon some tarpaulins in the basement of The Tate and they were so thick with soot and grime he sent them out to be cleaned, only discover that one of them was Turner’s unfinished painting, Harbor at Brest. The ghostly, unfinished canvas of Brest, allows the viewer the rare opportunity to see Turner’s process of preparing a painting and mark making which lies beneath the surface.

Masses of people, boats, churches, ramparts and towers fill these atmospheric canvases of the port towns of Dieppe, Cologne and Brest. However, it is not the reference to the mundane, the everyday life, that first strikes us about these paintings, it’s the marvelous rendering of sun.  With great atmospheric effect, this great ball of light in the sky, reflecting on the water, and the way the water divides the canvas, is what catches the viewer’s eye.

Turner was an early proponent of using new pigments, chrome yellow and orange, which created a luminosity and translucency never before seen in oil paintings.  His critics were quick to point out ‘unnatural colors’ with their brightness creating blinding effect of the sun.  They are the qualities most admired today about Turner’s work.  Light, is part of the narrative.

The atmospheric drama continues in three paintings on display on the south wall of the Oval Room, history paintings, depicting scenes from antiquity: Ancient Italy – Ovid Banished from Rome; Ancient Rome – Agrippina Landing with the Ashes of Germanicus; and Regulus. All three were exhibited between 1837 – 1839 at the Royal Academy of which two were part of The Turner Bequest of 1856.

A lover of history and travel, Turner created vast amounts of paintings, drawings and sketches, of scenes from history, as well as documentation of his sojourns throughout Great Britain and the Continent. Travels were the main inspiration for the content of his work.  During the Napoleonic Wars, 1897 – 1915, a travel ban was imposed between Britain and the Continent.  Once the ban was lifted, following the Battle of Waterloo in 1815, a new era in tourism began as artists, writers and the public at large flocked to the continent.  Turner joined forces with the masses crossing the channel to sketch while collecting material and subject matter for future paintings. Upon his death, he bequeathed his collection to the nation which included over 30,000 drawings, sketches and sketchbook and over 300 oil paintings.

The exhibition continues in the East Gallery of The Frick, where a delightful selection of watercolors, drawings and prints, full of historical references and allusions to contemporary issues, are on display. They are categorized geographically: Germany, France and England. This presentation not only depicts Turner’s passion for travel and love of the sea. Also, known as perhaps the greatest watercolorist ever, Turner amazes us with dexterity and skill.

We witness the brilliance of this artist, working at a time when watercolors were not regarded as ‘paintings’ and still called mere drawings. He elevates the medium to rival oil painting. His  marine watercolors are strongly represented, most notably Dover Castle from the Sea, Whiting Fishing at Margate and Aldborough, Suffolk. They capture reflections of sunlight on  water with its radiant glow, repairing a broken mast,  a bountiful display of fish, boats struggling against a strong wind and choppy seas, are  mastered by the genius of his technique.

JMW Turner was not always loved by critics during and after his lifetime. However, he created an immensely rich body of work, and was confident that he would be remembered as one of the greatest painters that ever lived. He was known to boast, “I am the real lion.  I am the great lion of the day.” Turner died in London, in 1851 and was buried at Saint Paul’s Cathedral next to other ‘lions’: Horatio Nelson, Anthony van Dyck, and Sir Joshua Reynolds.