Rick Harlow's The Landscape of Energy

Statent by a Berkshire Artist 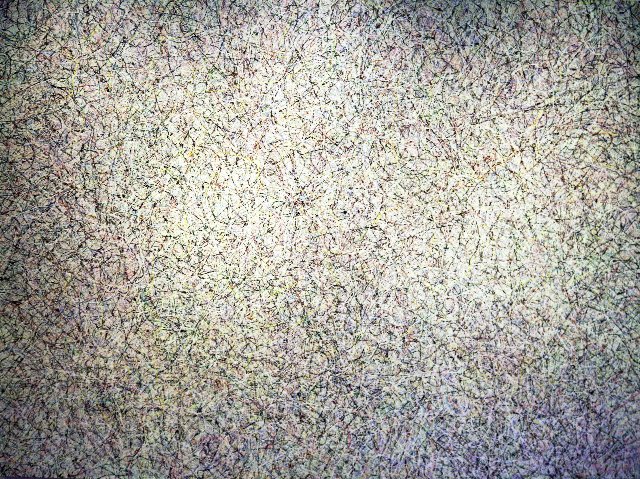 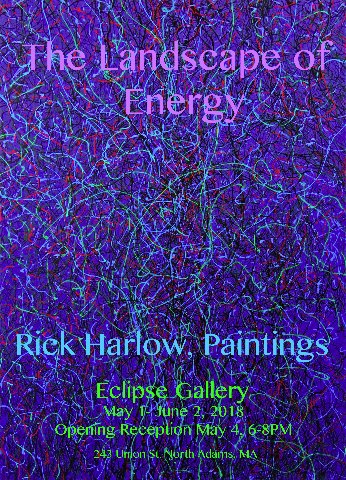 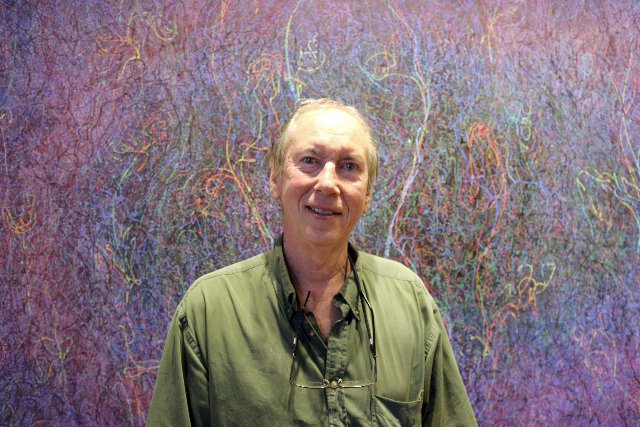 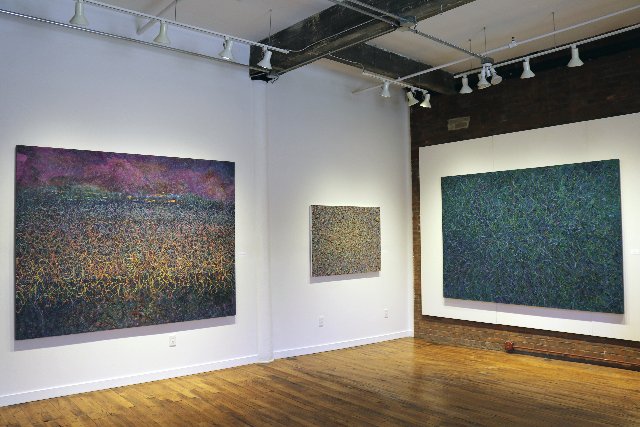 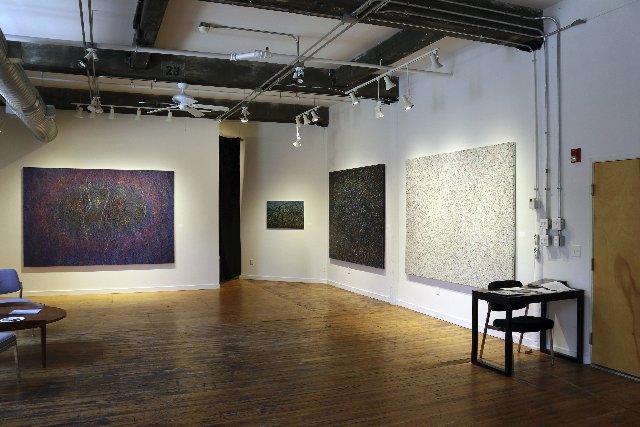 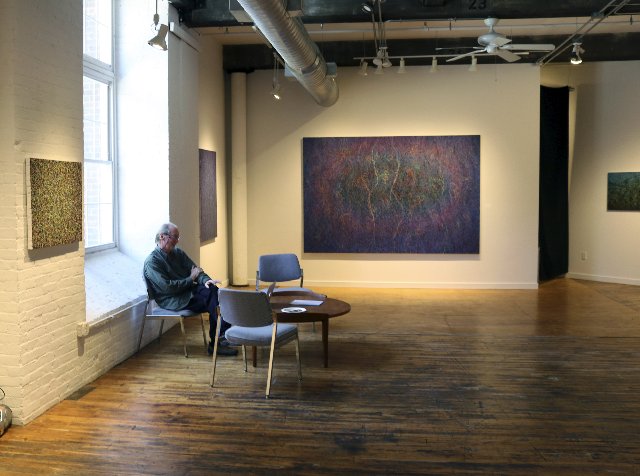 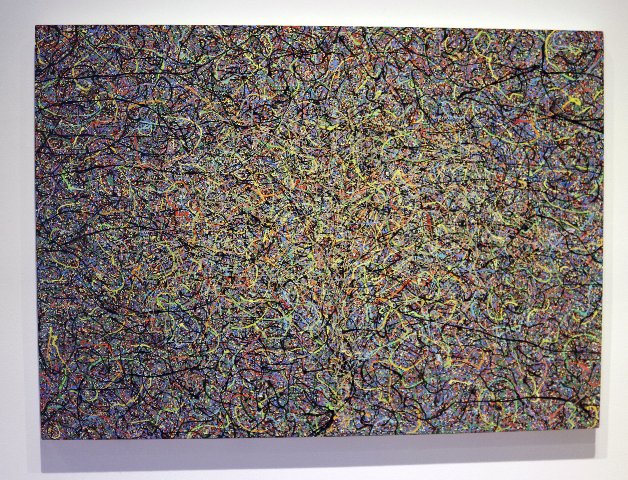 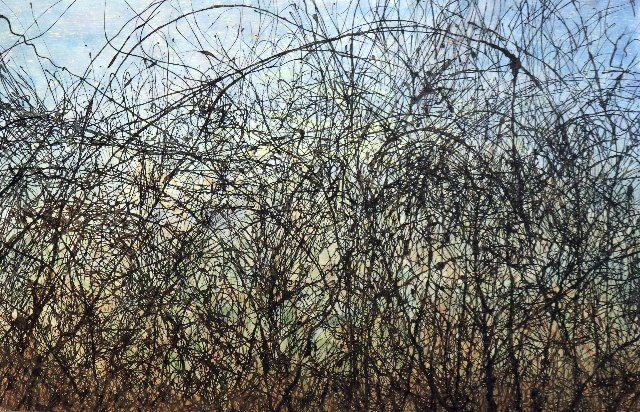 Two years ago I made a conscious decision to create new paintings focused on the techniques of dripping, splattering and applying paint with a sponge.  Early on in this process, a good friend of mine made the observation that I had moved from painting energetic landscapes to painting the landscape of energy.  That comment helped me to see the path ahead.  Looking back, I can make some sense out of what led me to this new series of paintings.

I have always been intrigued by the rainforests that I first experienced in 1980 when I ventured south of the border to the Yucatan of southern Mexico.  Over the next few years I traveled to Central America, Borneo, and the Amazon.  In the mid 1980s I was reading about chaos theory, which helped orient my perception of the rainforest.  I began to see this incredibly diverse expression of plants, animals and insects as an integrated system, not the tangled jungle that early missionaries described as “the part of creation that God had left unfinished.”

Between 1986 and 2001 I logged a total of 7 years living with indigenous cultures in the Colombian Amazon.  My decision to live with isolated peoples was driven by a desire to feel at home in the rainforest and get to know it from the inside out.

Through a deep immersion into the traditional practices of the different villages, I was taught how to shift my perspective in order to enter into a different relationship with nature.  I was taught to track, hunt and fish.  I participated in ceremonial dances lasting up to three days, involving fasting, and sleep deprivation. There were long treks through the forest and longer journeys by river.  The two most transformative events of my Amazon years were my participation in the male initiation ceremony of the Yucuna pueblo, and my introduction to Caapi, the great teacher plant more commonly known as Ayahuasca.

While most of my work prior to this exhibition has been inspired by the above-mentioned experiences, the new paintings have been influenced by my continuing work with the “Mamos” (Spiritual Elders) of the Kogui, Arhuaco and Wiwa pueblos of the Sierra Nevada de Santa Marta (SNSM) in Northern Colombia.

Their existence is based on compliance with their “Law of Origin” which can only be perceived or understood by close observation of the natural world.  Their perception of different nuances of energy expressed in all of creation is remarkable.  For them, rocks, trees, earth, water, wind, rain and thunder are sentient beings whom we must learn to listen to, in order to live in compliance with natural law, the “Law of Origin.”  Their spiritual work consists of maintaining the balance of nature in their mountain home (which they call “The Heart of the World”) for the benefit of the entire planet.

These teachings have left their mark on my work as I explore different ways that energy can be perceived and expressed through observation of the intricate systems in nature.  The energetic connections and chemical expressions of root systems that form underground communication channels between trees and other plants, mushrooms that exhibit some behaviors more similar to the animal world than the plant kingdom, and how our own bodies are wired, demonstrate how all life is an interconnected expression of energy.  This perception has been confirmed by my life in the Amazon, my experience of nature while journeying with the plant medicines, and most precisely, by the teachings of the Mamos of the SNSM.

The works in this exhibition begin with background layers of color sponged or brushed over the entire surface creating a color field.   Working on the floor, paint is then dripped or splattered, layer upon layer.  Each color that is dripped is carefully blotted up with a cloth that removes excess paint, leaving a flat dripped line.  After applying many layers of drips, the surface of the canvas remains relatively flat. Each successive layer that is applied allows most what is beneath to be visible.  I liken this process to multi-tracking layers of sound, one instrument on top of another, adding more bass or treble as needed until the balance of tones and values clicks in the right way.

My technique, while free and expressive on one level, is often quite controlled and conscious at the same time.  In my desire to be more expressive with the gestures and attitude of the drips across the canvas (while not having to worry about overloading the painting with too much of one color), I realized that I could paint over white drips and get a great deal of control over the field of color I was trying to achieve.  I could make drips disappear if necessary, by painting them the ground color, or I could make them pop by painting over them with a transparent layer of color that would make them glow in a way that a solid enamel color would not.  I could also create lines that change color and value and weave in and out of pictorial space.  All stages of construction are visible at the end of the process, from the ground color field to the last drop.

In using techniques that propel paint through space as gravity guides it to its destination, I enter into a dance with forces of nature beyond my control.  This seems like the most honest and effective way to express energy; by physically entering into a relationship with it.  Something happens during the flight of paint between my hand and the canvas that imbues an air of authenticity in the resulting mark.

This has been my journey to date.  I invite you to allow these paintings to take you on your own journey.

In the Studio with Rick Harlow by Charles Giuliano.