The Cake at Rivendell Theatre Ensemble 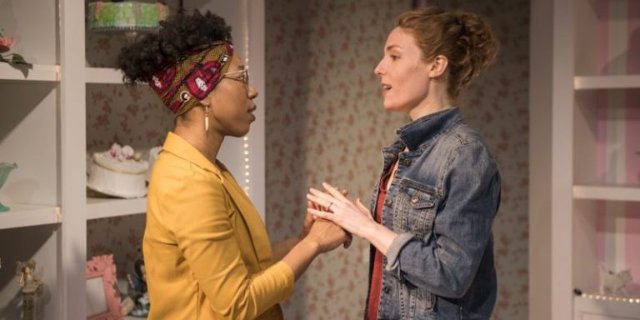 McNeil and White as Macy and Jen. Photo by Michael Brosilow.

Della’s Sweets is an adorable little cake shop somewhere in North Carolina. Winston is mentioned, which is what locals call Winston-Salem. The shop is pink and white, filled with cakes, and shepherded over by Della (Tara Mallen), who begins our story by instructing us to always use the best ingredients and follow directions precisely. Lauren Shouse directs The Cake at Rivendell Theatre Ensemble. Her director’s note in the playbill adds her personal insights to the play’s theme.

When Jen (Tuckie White) arrives, Della greets her warmly. Jen is the daughter of Della’s best friend and she has come to the cake shop as part of her wedding planning—to be sure it’s just the way her late mother would have wanted it to be. That includes a cake baked by Della, which sounds like a grand idea until Della meets Jen’s fiancé, Macy (Krystel McNeil), an outspoken, political woman who doesn’t eat cake.

Della: You don’t eat cake? Where do you get your pleasures?
Macy: Sex, knowledge and Greek yogurt.

Bekah Brunstetter’s play shines in giving us insights on the thinking behind a baker’s refusal to make a cake for a same-sex wedding. Brunstetter helps us understand the thinking on both sides; this is not a leftwing harangue. Della, who quotes the Bible, and her husband Tim (Keith Kupferer, one of Chicago’s stage stalwarts) express their long-held traditional positions and so do Jen and Macy. By the end, the knots are tied up, perhaps a little too neatly.

Della’s cakes are not only famous in the Triad. She’s been selected to appear on ABC’s “The Great American Baking Show” … until she isn’t.

Interestingly, while the Southern couple are horrified at the idea of a same-sex wedding (“It’s gross. It’s not natural.”), they don’t seem to even notice that their homegirl Jen is marrying an African-American woman. That’s a nice bit of casting, but it doesn’t ring true with the story and my familiarity with North Carolina.

Minor objections aside, The Cake is a charming morsel of a play, accomplished in 90 minutes with no intermission. It offers plenty of chuckles, a few thoughtful comments, and even a bite of cake at the end. Tallen as Della is delightful in her baking, her concern for doing the right thing, and her unrequited lust for her husband. The other three actors are also excellent.

The set design by Arnel Sancianco is spot-on perfect and his ingenious use of shop cabinets that pull out to create bedrooms for Della and Tim and for Jen and Macy is completed by Cat Wilson’s lighting.

Finally, Janice Pytel’s costume designs suit each character’s charms very well. She also creates a beautiful look for each of the brides, as Jen and Macy meet in a wedding march performed by Cat Stevens (also the name of Macy’s cat).

The Cake is particularly relevant now because the Masterpiece Cake Shop decision is expected to come down from the U.S. Supreme Court by the end of the current term (by June 30). Rivendell’s playbill includes a helpful description of the question as framed for the court by the parties.

Playwright Brunstetter is a native of Winston-Salem and received her BA from UNC-Chapel Hill and an MFA in dramatic writing from the New School for Drama. She has written many plays that have been produced by regional theaters all over the country. She is currently a co-producer for NBC’s “This Is Us.”

The Cake at Rivendell Theatre Ensemble, 5779 N. Ridge Ave. in Edgewater, has been extended through June 2. Tickets are $38 for performances Thursday-Sunday. Rivendell is Chicago’s only equity theater dedicated to producing new work by women. Free parking in the Senn High School parking lot.