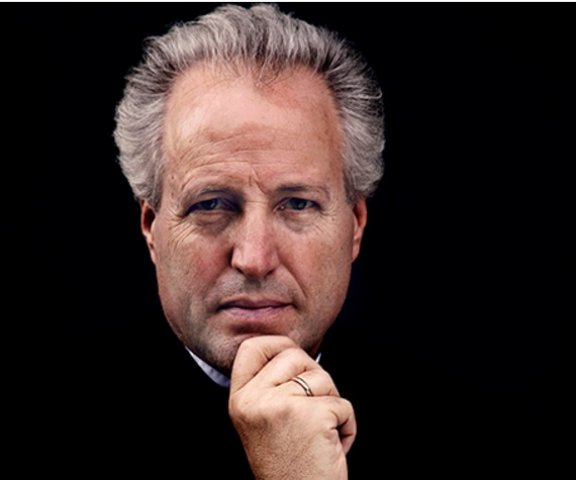 Manfred Honeck's reputation in this country rests on his work with the Pittsburgh Symphony Orchestra. For these concerts (seen Friday morning by Superconductor)  he started out by altering the seating arrangement and thus the trademark sound of the Philharmonic. The violas, normally dominant at stage right, were pushed upstage, switched with the usual place of the cellos. This broadened, darkened and deepened the bright sound of the orchestra, and proved especially efficacious for this wide-ranging and technically challenging program.

The concert started with Mr. Honeck's twenty-minute Rusalka Fantasy, a string of good musical ideas strung expertly together with little regard for the opera's plot. Indeed, Mr. Honeck's suite opened partway through the second act of that show, with the elegant Polonaise that announces the palace ball. Rich orchestral playing followed, moving with the bounce and spring of inspiration that is provided by some of Dvorak's most ravishing music. The climax was the famous Song to the Moon, pushed later in the score and "sung" by the eloquent violin of concertmaster Frank Huang.

The orchestra was joined by Nikolaj Znaider, an acclaimed violinist who, next week will take the role of conductor with the ensemble. He offered the Sibelius concerto, digging deep into its soulful, wintry main theme, a melancholy lament of very Finnish character that comes with the hint of a tiny smile in its last turn of phrase. Orchestra and soloist do not engage in the traditional dialogue in this movement. Indeed, the former falls silent for the long central cadenza, a challenging working out of thematic ideas that effectively works as the development of the movement.

Znaider and Honeck brought out the sweet, dark soulfulness of the central slow movement, before leading the way into the dancing finale. This movement, which has been compared elsewhere to a ballet of dancing polar bears, features a folk-like fiddle theme that is constantly answered by a pounding figure in the timpani. However, this performance seemed to lack the last bit of manic energy needed to bring this party home. While prettily played, this celebratory movement should be a little more raucous.

Another Honeck arrangement followed: his suite built from sections of Tchaikovsky's great ballet Sleeping Beauty. Once more, dramatic unity was defenestrated in favor of pure musical effect, as Mr. Honeck led the troop through eight pleasing sections cherry-picked from the score. This had the benefit of moving the Sleeping Beauty Waltz (usually played as an encore by a touring orchestra) to a place of great prominence, the mellow tone of the pushed-forward cellos soaring above a plucked accompaniment,.

The orchestra's finest moment came in the Act I finale, inserted halfway through the suite. This is the moment when Princess Aurora pricks herself on a spindle, and falls into the enchanted, deathlike sleep that gives the work its title. Ironically, the music here is anything but somnolent, with the great moment accented by a clash of cymbals and crash of gong. The set of enchanting variations that followed paved the way for the famous "Rose Adagio" which ended the concert on a slow, elegiac and elegant note.  (Reprinted with permission from Superconductor).