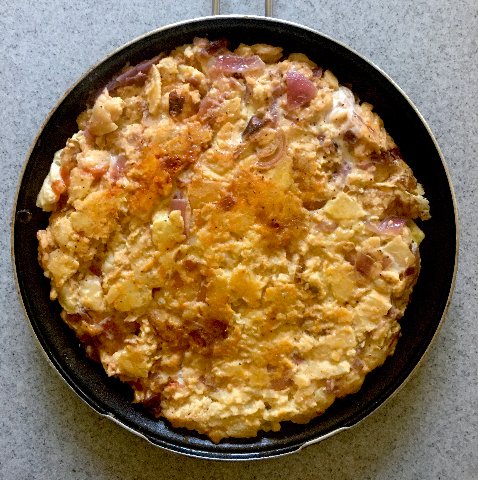 Spending several months this past winter in Spain, our daily ritual of having a Spanish tortilla, which has nothing in common with the Mexican  version of a tortilla.

The Spanish tortilla is more like a potato-onion omelet, which must be flipped over in the pan to make this recipe work.
Spanish Tortilla
Ingredients:
One pound of potatoes (Russets are best)
One large onion
Six jumbo eggs
Olive oil
Salt
Pepper
Preparation:

Peel and thinly slice the potatoes in a mandolin. Do the same with the onion.

Add oil to your skillet and cook potatoes without browning. Take out potatoes when soft. Wipe out skillet and add oil, then onions. Cook until translucent.

In a large bowl, crack the six eggs and beat the eggs adding salt and pepper. Add the warm onions to the mix, then the potatoes. Stir together.
Add oil to the skillet and pour your mixture in. Cook on medium until the edges are firm. Slide onto a plate and top the plate with another plate, invert and add the egg mixture to the skillet. Add some oil before doing the inversion and cook for five minutes.

Slide off the skillet.

Serve warm or at room temperature.

I like to add ketchup to the tortilla.
Back to Front Page Section Home