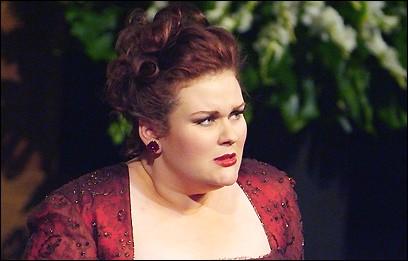 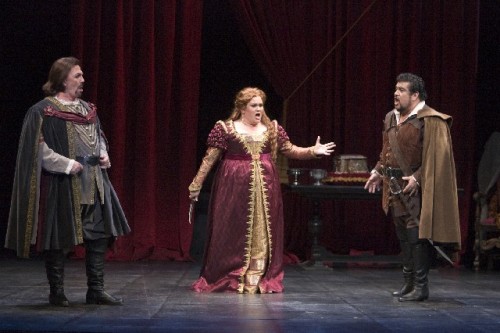 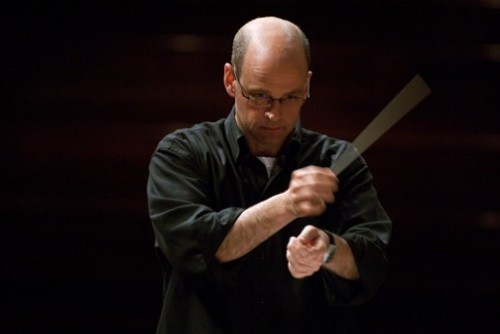 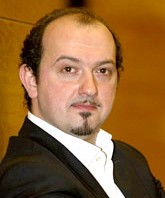 The name to remember is Quintiliani, Barbara Quintiliani, and if you haven’t heard of her, once you hear her, you won’t forget her. She is a full-voiced soprano whose voice starts from someplace deep and keeps on going, unbroken, all the way to the top. She sings coloratura as if born to it and she has the trill of an angel. She is also a local girl, having been born in Quincy, where she now lives. She has said that she thinks of Opera Boston, where she has sung three roles previously, as her home company. Her personal story of triumph over adversity – born poor and more recently fighting multiple sclerosis – has been told recently in the Boston Globe and in an interview with former Globe critic Richard Dyer on the Opera Boston website.

So why she isn’t singing at the Met or La Scala? Well, her big voice comes in a big package, and opera directors today tend to cast romantic sopranos who fit into the proverbial “little black dress” that brought Deborah Voigt to grief a few years ago. Sometimes they’re justified, but sometimes they’re not: Quintiliani’s girth doesn’t keep her from being a thrilling Maria Padilla.

Lovers of bel canto - beautiful singing – should consider dropping whatever they’ve planned and going to the Cutler Majestic this coming Sunday afternoon and Tuesday evening to hear her – she’s the real thing.

Quintiliani is the primary reason to see Opera Boston’s production of “Maria Padilla,” but this is not one of those productions where one star is surrounded by asteroids. The other three major roles - sung by mezzo-soprano Laura Vlasak Nolen as her sister Ines; tenor Adriano Graziani as her father Don Ruiz de Padilla; and baritone DongWon Kim as her lover, Don Pedro, the King of Castile – are also fully realized. Graziani, who has the only tenor mad scene in the repertory, is particularly powerful; one imagines that it will be only a matter of time before he is singing in major houses.

Because of the relative equality of the voices, the many ensembles are particularly effective, especially the second act duet between Maria and Ines. A bit of background: Maria has moved into a palace supplied by Don Pedro, to whom she is secretly married. Her father, feeling the full macho assault of having a dishonored daughter, vows revenge. Maria and Ines fall into each other’s arms to console each other. Maria sings, “Heaven offers the guilty daughter nothing but remorse.” Spinning out a lower line, Ines, functioning like a Greek chorus, observes, “This is so tragic for you.” They come together to express the hopeful sentiment, “May we feel the peace of a rainbow in a clearing sky.”

It doesn’t matter what they sing, of course. Because this is bel canto opera, it matters how they sing it, and Donizetti writes a long ravishing duet for the two female voices, one a little higher than the other, interweaving with each other in apparently endless play and joy.

Such duets are among the pay-offs in bel canto opera, and opera lovers wait for them through the nonsense that often sets them up. We’ve heard this kind of rapturous singing before, either live or on records, in duets between Maria Callas and Ebe Stignani, Joan Sutherland and Marilyn Horne, Monserrat Caballe and Shirley Verrett (or Beverly Sills and Verrett). This duet between Barbara Quintiliani and Laura Vlasak Nolen might not quite equal those great precedents but it fits comfortably in the same category.

Okay, now to the nonsense that leads to such moments. “Maria Padilla” is a seldom done opera by a composer who wrote more than 75 of them in a career cut short in 1848 at age 51 by dementia brought on by syphilis. It’s true that few of Donizetti’s operas are regularly done today, but a number of them are at the heart of the repertory. Where would the opera season be without “Lucia di Lammermoor,” “L’Elisir d’Amore,” “Don Pasquale,” “Anna Bolena” or “La Fille du Regiment”?

Because of the bel canto revival set into motion by great singer/exponents like Callas, Sutherland and Horne, there are more bel canto operas produced today than there have been since their heyday in the first half of the Nineteenth Century. Former “rarities” have been unearthed that have a multitude of virtues and are being produced repeatedly. Alas, “Maria Padilla,” despite the marvelous singing in the current production, is not likely to be one of them.

No one asks for kitchen sink realism in a romantic opera. But the great ones – “Lucia” and Vincenzo Bellini’s “Norma” and “I Puritani,” for instance, use the libretto’s rickety plot as a scaffold on which to hang a musical drama of deep passion and abiding emotional truth. We overlook the inconsistencies of those great masterpieces – Norma is a Druid priestess sworn to virginity yet she has two young children by her mortal enemy, a Roman warrior, hidden in plain site – because the music is so emotionally convincing.

Some of the music is emotionally convincing in “Maria Padilla,” as well – and not only the duet cited. The entire third act is full of amazing ensembles that move effortlessly from duet to trio to quintet to solo back to duet, etc. And Gil Rose led his orchestra in a muscular but refined reading of a score that is subtler in orchestration than many bel canto works. As Richard Dyer notes in a program note, “this is not an ‘um-pa-pa’ opera.”  But there are not enough of such moments to make you overlook the plot’s implausibility. You don’t have to be a partisan of Arthur Miller realism to find this opera ridiculous.

I won’t bore you with the details of the plot, which make little sense anyway. Let’s just say that it has to do with love, honor, betrayal, revenge – the bel canto staples. The worthy musical moments emerge as hard-won battles.

Alas, the production does not help matters. Opera Boston prides itself on mounting its own productions, but if the result is as cheesy as this one, you have to wonder why it bothers. Stage director Julia Pevsner did keep the action moving cleanly. And she introduced a laugh-generating moment, when Maria kicks the wedding bouquet of her French rival into the wings.

The story, believe it or not, is based in history, the relationship between a real Maria de Padilla and a notoriously cruel King Pedro in Fourteenth Ventury Spain. The set, which is used in all scenes, is generically Gothic and so flimsy looking that it reminds you of the old flat sets opera companies used to employ. The costumes, especially those of the black-clad courtiers, are better, but in general, the banal stage picture argues for an abstract or modern dress production. (Of course, that brings up the issue of the “little black dress.”) If you don’t have the budget or imagination to do historical right, don’t do it at all.

Still, for all the disappointments, the lure of a bel canto opera, whether a masterpiece or a journeyman work, is the singing, and “Maria Padilla” has singing to spare.