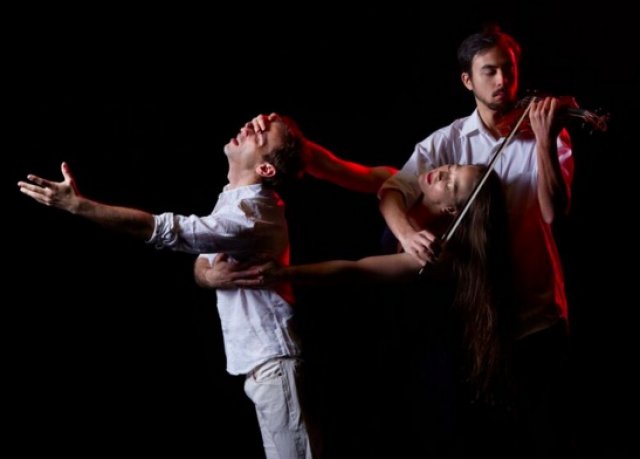 Anthony Roth Costanzo is a counter tenor opera aficionados come out to hear. His voice is unusually rich for this range. He is also a physical actor of great skill. The Master Voices presentation of Orphic Moments implanted a dramatic cantata Matthew Aucoin wrote for Costanzo into the opera by Gluck.

While the story of Orpheus is not central to the myths that form Western culture, it is a founding myth of music. Until the very end of the opera, the director Zack Winokur follows the usual interpretation. Then Aucoin’s cantata is inserted into Gluck and the piece bends to a new idea. Orfeo is seen as a great singer, always on the lookout for a way to display his vocal talents. Eurydice’s death and descent to hell are seen as opportunities. Yet, given an opportunity to live again, Eurydice becomes a burden on the singer, and he is glad to be rid of her at the end. Only Wolfgang Wagner has dared this ending in the thousands of past performances.

The Master Voices chorus participates in the opening wedding feast as actors. In Mark Morris’ production, famous figures from the past watch the proceedings. Here, the chorus is placed in the three tiers of boxes that surround the stage. At one point, a central panel opens to divide them into two sections. They are splendid in their expanded role.

Lighting designer Marcus Dhosi deserves a call out.  Spotlights across the ceiling above the stage use colored gels to reflect changes in the character of the action. Sometimes only two are lit. As white light they focus on the central characters. Shadows cast against the base of the boxes that surround the stage enhance the drama.

Costumes are also important. A beautiful white wedding dress with a long train flows behind the human bier carrying the dead Eurydice off to Hades. It contrasts strikingly with her hellish, slinky black dress in the underworld.

Not enough can be said about Douglas Fitch’s set. The spare details, each one apt, both create a world and accentuate the music. Flowers are scattered everywhere, in celebration and seemingly as an offering. The use of the physical stage in the Rose Theater gives an opportunity for the chorus to sit in their usual positions and also to participate as actors. The central table rises to the theater's roof to distinguish between upper and lower worlds.

One senses that the multi-talented dramaturg Cori Ellison, who also provided titles, was a dynamic presence in developing the production. Frankly, I dreaded the insertion of the Aucoin cantata in the middle of Gluck's opera. It worked seamlessly. Aucoin’s music is of the now, with leaps in the vocal line and harmonic dissonance. Yet the use of chiming instruments ties it to the loveliness of Gluck. This was an idea that triumphed in freshening up a centuries-old work and honoring it at the same time.

Kiera Duffy was masterful in the role of Eurydice, bringing a rich soprano to Gluck’s lines. Lauren Snouffer, a Faith Geier artist who recently dazzled as Agnes in Opera Philadelphia’s production of Written on the Skin, was charming and demanding as Amor.

Anthony Roth Costanzo, also a Faith Geier artist, is both lead singer and producer of this work.  With a group of young opera artists he has formed the American Modern Opera Company.  Aucoin is a co-founder.  He says, “We want to redefine opera company, We’re a company — in the sense of having company over for dinner. We make opera, but we want to pay attention to all the senses. When a piece involves dancers, singers and instrumentalists, they all have an impact on each other.”

Whoever is responsible for this choice by Master Voices will hopefully be involved in future decisions, because this unconventional choral presentation was terrific.