Bootleggers Rock Monday at The Mews 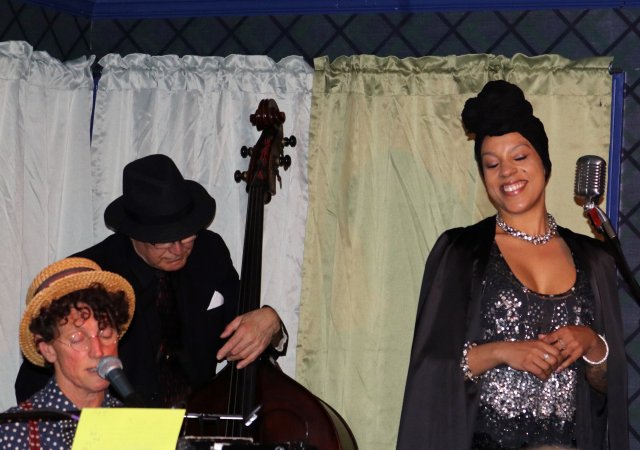 A torchy rendering of Summertime. 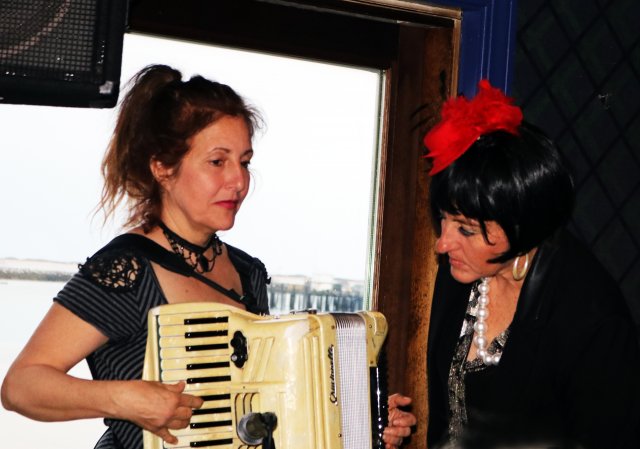 Terri Conti on accordion as Roxie Layon on recorder looks on. 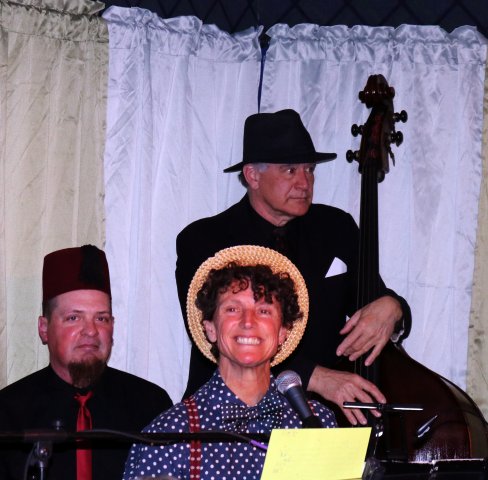 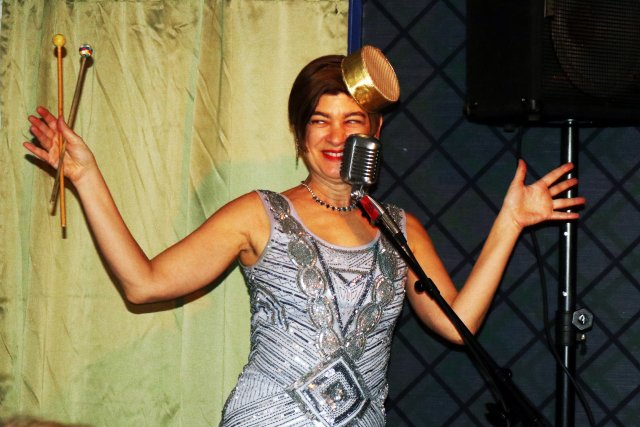 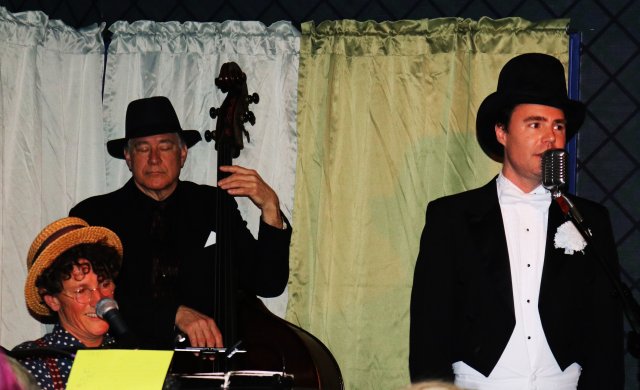 A bit of class from a handsome dude. 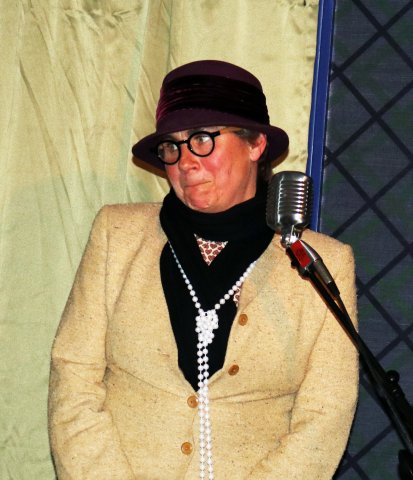 Touched of a poet. 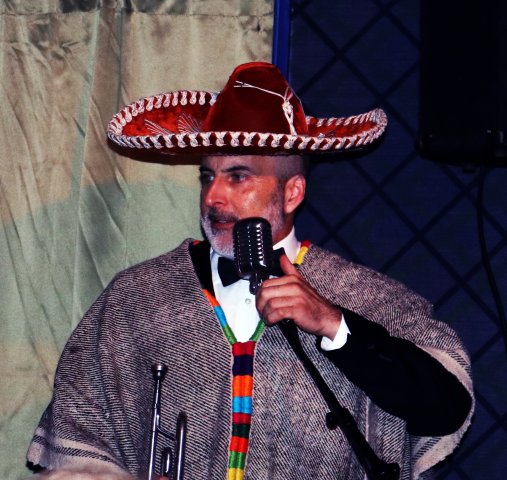 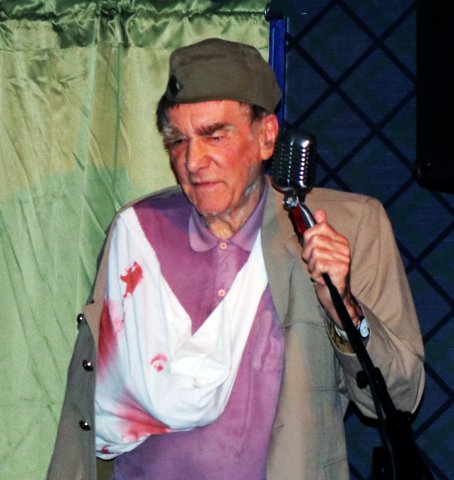 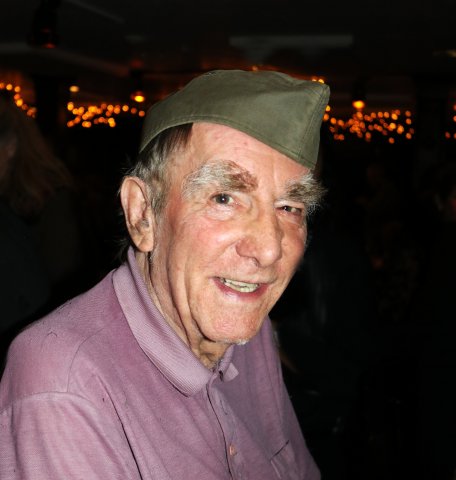 Hutchinson is a renowned artist and poet. 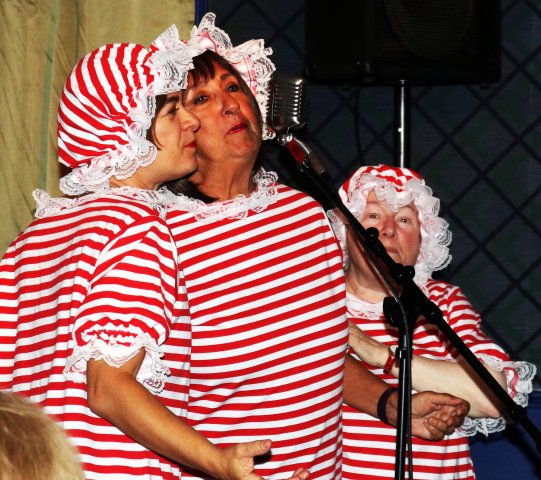 Bathing beauties by the sea. 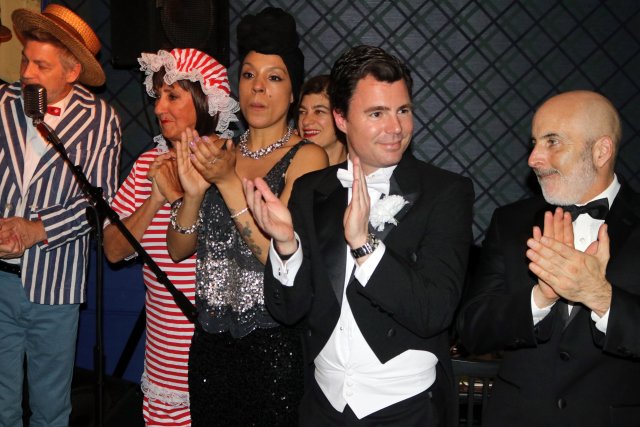 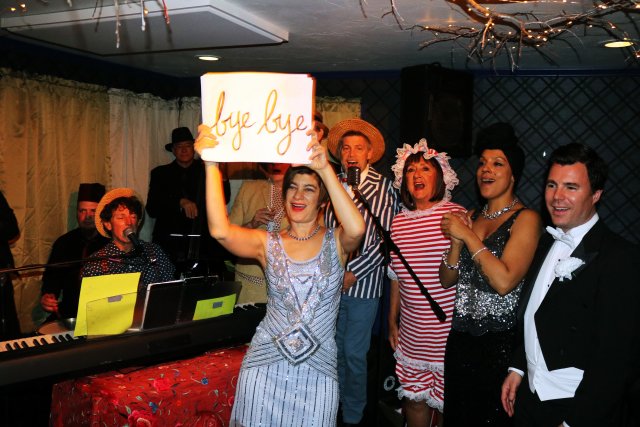 Pre season it was a Monday night in Provincetown. Compared to summer mishegos, in early May, the narrow streets were relatively tranquil. It was even fairly easy to find parking.

Arriving for an evening of dinner and cabaret at The Mews we were asked if we had reservations. That was something that never occurred to us on, good grief, a Monday.

The joint was packed for Zoe Lewis and her 1920s themed cabaret with The Bootleggers and a cast of thousands, or so it seemed.

We were told that there was seating downstairs with the same café menu. After which there would be standing room only for the show.

But, we pleaded, it was the cabaret that we had come for. Spotting a couple of stools next to a bar we asked if we might just squeeze in and make the most of it. There would be barely enough room for dinner plates with glimpses of the stage.

We were getting settled when Steven, the charming Maitre d', informed us that there was a cancellation. That allowed for an upgrade to a ringside table.

While we enjoyed a dinner of crusted cod, for me, and two nicely grilled lamb chops for Astrid, the band was setting up in a corner of the room.

During the grim winter months, this year was particularly brutal, the locals enjoy open mic on Monday nights. Many of the usual suspects, some attired in Roaring Twenties garb, would take their turn singing vintage tunes. The range of skill sets was rather broad, to say the least, but all in good fun.

A wacky flapper, AKA The Cigarette Girl, had a zany arsenal of props from funky signs to ersatz harvest moons,  accenting many of the songs. She also sang, shimmied and performed percussion on coconuts.

The 1920s, as Zoe demonstrated with remarkable gusto, was a great era for composers and lyricists. The material ranged from pie in the sky, lyrical romanticism, to tongue-in-chic with a soupcon of the risqué. Particularly in Gay Paree, much like P’Town, ooo la la, mon dieu, boys will be girls and girls act like boys. The set included a few gender benders to say the least. Oh my goodness!

At the piano Lewis proved to be a remarkable musician, singer, leader and rousing raconteur. Her skill set is off the charts, from ragtime chops when rattling the ivories, to an amazing vocal range from growls to croons. One trick is pursing her lips to create a sound that evokes a kazoo. There was even a touch of playing a mouth harp.

Zoe kept the pace fast and furious backed by the fabulous Bootleggers. They included Terri Conti on accordion, Roxie Layon on recorder, Liam Hogg on drums and Ron Ormsby on bass.

“By the way” Zoe informed us “Prohibition never came to Provincetown.”

During the set Zoe, from time to time, cut back to the rock steady trio of piano, bass and drums. The remarkable accordion of Conti and recorders of Layon were featured in specialty numbers.

After an ensemble opener of “Five Foot Two” Conti was spotlighted in “Bei Mir Bist Du Shoen.” It was a song that Benny Goodman’s band liked to kick around. It knocked my socks off to hear her jazz riffs. The accordion for cripes sake! Who knew that she could swing the heck out of it? It reminded me of the 1950s and my first time in a Montmartre café with its Apache troubadours.

The hits kept on coming as there was a parade of performers taking turns on the postage stamp of a stage. It was a nice thumbnail of local talent with a rip roaring cast of characters including a touch of a poet with a riff on Edna St. Vincent The Lay.

With, of course, a dash of Dorothy Parker evoking the Round Table at the Algonquin.

The ever effervescent Cigarette Girl vamped about with a hilarious prop for “Shine on Harvest Moon.” It’s a song my Dad liked to croon.

Growling like Fats Domino the redoubtable Lewis ripped into “I’m Going to Sit Right Down and Write Myself a Letter.” Shutting your eyes one would be hard pressed to say whether it was a dude or a dame mouthing off.

That hilarious ambiguity was conveyed by the ultra risqué “Masculine Women.” As we said before folks, this was a Monday night in P’ Town.

The Cigarette Girl was all over the standard “Pennies from Heaven” with a twirling umbrella deflecting the rain of coppers.

From South of the Border down Mexico way, with poncho and sombrero, we enjoyed “El Rancho Grande” including a few mariachi trumpet toots. Ole.

With help and kindness of strangers the elderly artist, Peter Hutchinson, made his way to the stage. A casualty of war with a bandaged nogger and arm in a sling, the British-born singer croaked his way, charmingly and evocatively, through “There’ll Be Bluebirds Over the White Cliffs of Dover.”

It’s where a vacationing, British-born, Zoe will be reading this.

The hits kept on coming including a diva turn of the torchy Gershwin tune “Summertime.”

The spectacular recorder of Layton was featured on “Cuba.” She told us of a recent visit to the island.

Then with everyone jammed on stage for a closing number and photo ops the night came to an appropriate wind down with “Bye Bye Blackbird.”

During the summer Zoe performs once a week alfresco in Truro as well as other gigs on and off the Cape. She makes the rounds of festivals. Catch her if you can.

For her club dates, be sure to make reservations. You won’t want to miss this remarkable entertainer. That sleepy Monday night proved to be the tops of our fun week off season in Provincetown. Yowzah!