About My Painting by Pieter de Hooch 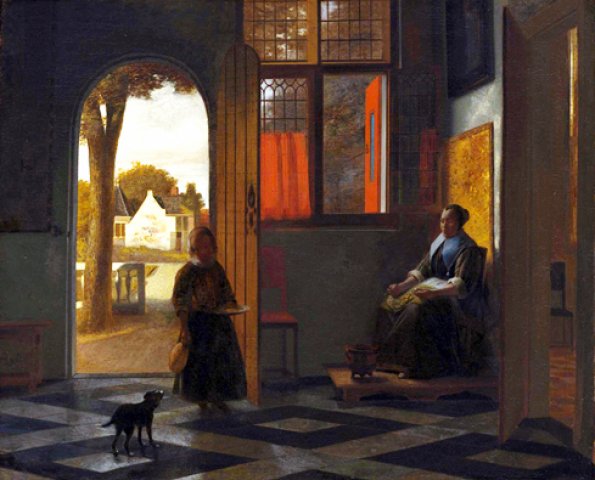 Image courtesy of the author.

Week five of the shutdown. The initial dread and diversion has faded. The existential doubt rises up and we wonder about our basic survival- much as the first settlers of New Amsterdam did long ago when they first arrived here to start a trading outpost. The island of Manna-hatta has become a wild and empty place again and I feel the Dutch spirit rising up from beneath the asphalt.

We Manhattanites are not known to be a domestic breed. We live in a city filled with commercial, cultural, recreational opportunities on every street corner and these have always been an extension of our habitat. Many of us live in small apartments while we surf the island; the streets are our hallways, the museums our living room, the restaurants our kitchen and the parks and rivers our backyard.

Now in the Age of COVID0-19, we find ourselves looking at our four walls as the new boundaries of our universe. When we venture outside, the streets are shuttered and we pass the sparse masked figures at a distance. Everything that was the vitality and freedom of New York has been closed. The last great Gotham shutdown was the blackout during Hurricane Sandy. Those of us that remained downtown huddled around candlelight with strangers and imagined we were transported back to a simpler time without electricity or internet. Now we are confined mostly to our homes but have all the trappings of domesticity: hot water, toasters, Facebook- there are no primordial distractions. Many of us cannot worry about money because no one is paying us and we will not be paying anyone for the time being. What do we do? We are stuck in a habitat we now realized was just a backdrop, a pied a terre in the vast wonderland of Gotham.  Now we cook, wash and sweep our floors like the tiger that paces the same circle in his cage with bloody paws.

I look to a painting on my wall by the 17th century Dutch painter, Pieter de Hooch. It is a domestic scene of a mother calmly peeling turnips in a corner while a child enters the threshold carrying a flask and a plate, smiling down at a little dog looking up in anticipation. I am relieved.

Recently I returned from the artist's first exhibit ever in the Netherlands which closed last month at the Museum Prisenhof in Delft, steps away from his residence on the Oude Delft. Depicting how we fit into our rectangular dwellings was a lifelong fascination of De Hooch who was born in Rotterdam in 1629, moved to Delft by 1652 and then relocated to the more prosperous Amsterdam sometime after 1660.

New Amsterdam, lasted from 1626 until 1664 when 4 English frigates sailed into the harbor demanding surrender. They later exchanged the island of Surinam and the Island of Run in the West Indies to the Dutch in the Treaty of Breda. New Amsterdam then had a population of 2,500 and practiced the kind of free trade and multiculturalism that characterizes much of what is New York today. According to Russell Shorto, author of Island at the Center of the World, the Dutch influence on America has often been overlooked due to the English's subsequent conquest and their own rewriting of history.

While the Dutch were fur trading and building homes in Manhattan below Wall Street in the 17th Century, on the other side of the Atlantic Pieter de Hooch was busy painting his famous Dutch interiors in Delft that so inspired Vermeer who lived a few blocks away. Both artists focused on harmonizing the geometry of the walls and fixtures within the home with the organic form and movement of the human figure living within. While Vermeer's work was more studied and focused on the single figure entranced in her tasks, De Hooch's interiors were freer and filled with the air of human relationships. These kinds of pictures were in demand in 17th Holland where a new merchant class was established with dispensable income from foreign trading or local production. People worked hard and when they returned home, they wanted a reminder of the true fruits of their labor: their home life.

The juxtaposition of geometry and human figure in European art before the Dutch Golden Age was confined to religious subject matter: whether twisted bodies on crosses, apostles among Greek architecture, or groups of small figures set in grand churches and cathedrals, this geometry was idealistic and often at odds with the human figure.  But now, a kinder gentler geometry was brought into the Dutch home: the sacred was now the domestic. This was the dawn of genre painting.

I look back at the picture; the gently forward movement of the child and the calm receptive seated matriarch gives the daily scene an air of the Annunciation. Light flows through the beveled glass window and dances upon the wall over the woman's head. It bounces off open doors and shutters, showing its simple but mesmerizing journey from its outside source to our eyes. The tiled floor lifts upwards to create a holographic dimension to the entire room while simultaneously flattening into diamond shapes. A shaft of light is seen mysteriously thru the crevice in a farther room.

De Hooch's fascination with architectural elements like bricks and tiles probably took a cue from his father who was a bricklayer. His mother was a midwife but passed away while he was young and Pieter himself lost 2 of his 7 children, likely to the bubonic plague which killed a tenth of Amsterdam's population in the 1660s. While traces of these losses may be read into some of his room's empty chairs, De Hooch's most well-known pictures are optimistic and unsurpassed as homages to the beauty, tenderness and dignity between mother and child in the home.

Movement and stillness, light and shadow, figure and rectangle are reconciled by the ineffable... quietude, to coin a phrase by the late Dutch curator at the Metropolitan Museum of Art, Walter Liedkte. "What one most admires in De Hooch are qualities that seem intangible, intuitive, even inarticulate.... the interior itself seems to promise comfort and protection, while the light stroking (as if feeling) different surfaces suggests pleasure in the beauty of ordinary things." (Vermeer and the School of Delft).

Now with our inabilities to work, go out, and distract ourselves with the business of the world, it is a good time to pierce through the centuries and look at the walls around us, at the things De Hooch painted; a child in the doorway, the shaft of afternoon sunlight, a pitcher of water. His pictures force us to slow down and savor the simple joys of our lives in our homes as the Dutch did long ago- even beneath our feet. What else have we been striving for?

Allen Hirsch is a painter, writer and entrepreneur and lives in Soho. The New York Times produced an Op-doc, "Long Live Benjamin," on the artist and his monkey which won an Emmy in 2018.

The painting by Pieter de Hooch A Woman Seated by a Window with a Child in the Doorway dated c.1663 is owned by the author.