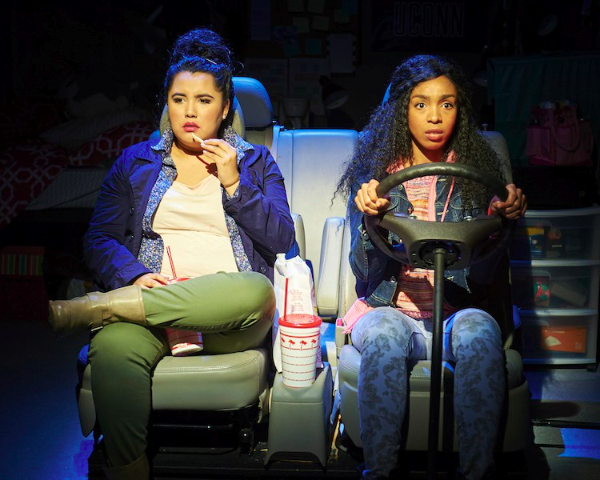 Rodriguez and Ryann as Jess and Lexi. Photo by Lee Miller. 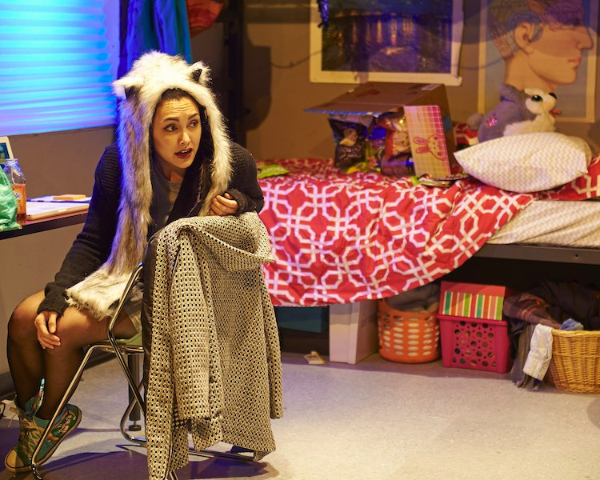 Playwright Lauren Yee calls her play Hookman an “existential slasher comedy.” And Steep Theatre’s new production takes her up on that with creative staging, solid performances, especially by the three female leads—and plenty of blood. Hookman is smartly directed by Vanessa Stalling.

Kiayla Ryann plays Lexi, our heroine, whose mother warned her to fear the Hookman (a terrifying hook-handed man who might be hiding in the back seat of her car). The existential trauma in Lexi’s life is the death of her friend Jess (Karen Isabel Rodriguez) in a car accident while Lexi is driving. They relive that scene repeatedly in the 75-minute play, each time piecing out more of their dialogue.

Lexi is a freshman at UConn, across the continent from her family and Jess (who goes to UC-Davis). Her roommate is a Jersey girl, Yoonji (Aja Wiltshire), who favors animal headgear (those pink furry headphones!) and is not very sympathetic to Lexi’s problems. Once back at UConn, Lexi agonizes over whether she should go back home to speak at Jess’ memorial. Her efforts at dealing with trauma and grief, without much support, are the heartfelt nugget of this often-hilarious play. Joan Didion’s 2005 book about mourning, The Year of Magical Thinking, is mentioned by several characters, but only one person actually read it. (Yoonji read the back of it, then went on Amazon and read the reviews.)

The story begins during Thanksgiving break. Lexi and Jess are driving to a midnight movie after stopping at an In ‘N Out for burgers, fries and malts, Lexi volunteers that she thinks she was assaulted by a guy she met on campus. “I think I was raped the other day.” Jess is horrified and thinks Lexi should do something about the assault.

In another scene, Lexi is in a Skype conversation with Sean (James Doherty), the guy she met before Thanksgiving. Lexi has a class with his brother, but Sean is in Chicago. Their conversation meanders but at one point, Lexi says, “I kind of wish you’d’ve asked first….I probably would’ve said yes so like no big deal but (swallows) You kind of forced me.” Sean changes the subject.

Hookman (Doherty) appears and reappears, sometimes sneaking out of Lexi’s dorm room closet. Present or absent, he looms throughout the play. The scenes in which he tracks a drunken Yoonji through the snow are shown on video screens.

When the playbill credits include a person responsible for “violence and gore design,” you know this isn’t going to be a traditional play. And Jon Beal’s violence and gore is a essential part of the vivid environment that director Stalling and scene designer Arnel Sancianco create for Hookman. Mieka van der Ploeg’s costumes become bloodier throughout the play.

Lauren Yee’s work seen in Chicago includes Goodman Theatre’s staging of King of the Yees this year and Victory Garden’s production of Samsara in 2015. Among her many awards is the Francesca Primus Prize for emerging women playwrights from the American Theatre Critics Association in 2016 for her play, In a Word.