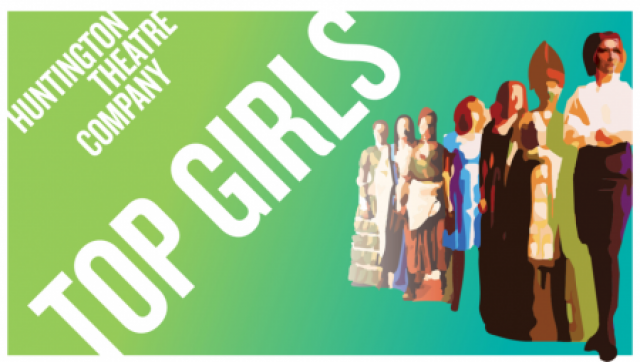 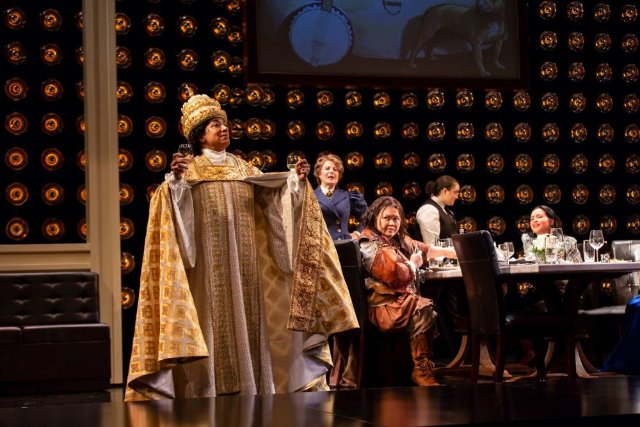 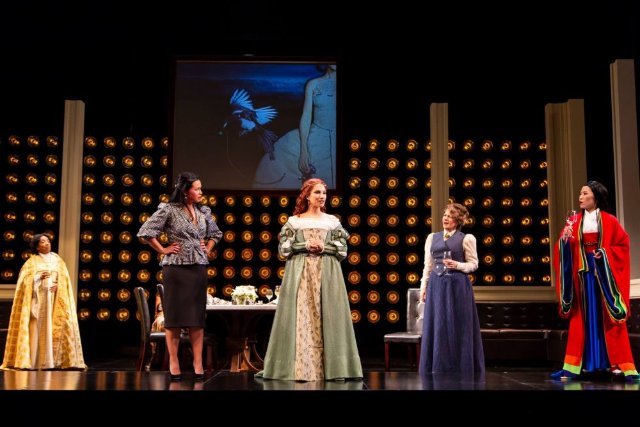 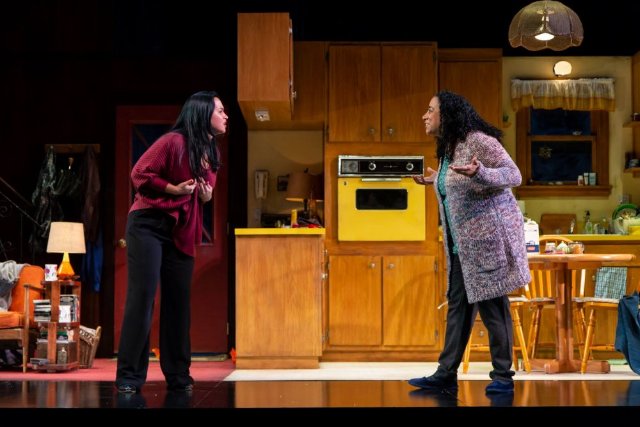 Carmen Zilles and Sophia Ramos as sisters Marlene and Joyce 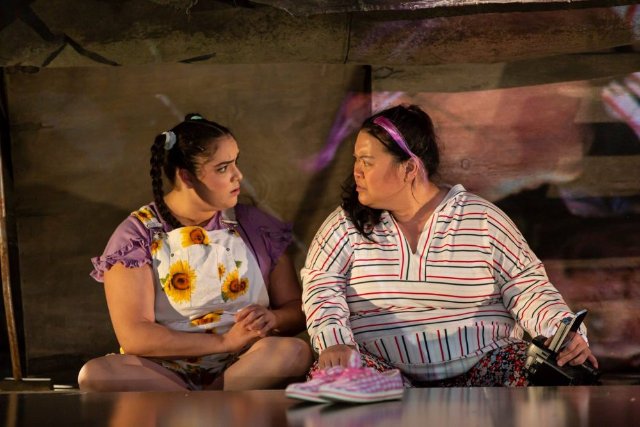 Top Girls was first produced at London’s Royal Court Theater in 1982 and is still relevant for its socio-economic and political topics. It also weighs in on women’s places at work and in society. The 1980s were the Thatcher/Reagan years and in 2018 the western world is again dealing with political right-wing policies by governing parties.

Then and now the question remains: ”What about Maggie?” - as a stand-in for all human beings, who will need kindness and real assistance from individuals, communities and governments at all levels, so that they can lead their best possible lives.

The play begins with a dinner-party of historical famous and infamous women, all clad in appropriately stunning costumes: Pope Joan (Sophia Ramos), a real or fictional female pope of the 9th Century; Lady Nijo (Vanessa Kai), a 13th Century Japanese concubine of the Emperor and in later life a repentant Buddhist nun, who also published her memoirs. Next , Dull Gret (Carmen M. Herlihy), a female warrior, was depicted in a Pieter Bruegel the Elder painting in the 16th Century. Patient Griselda (Ella Monte-Brown), fictional from the Canterbury Tales, was a beautiful farm girl courted and wedded by a Marquis under the condition to always obey him. And she did! Finally, the last guest is Isabella Bird, a 19th Century world-traveler, explorer and novelist. Hosting this exquisite party during the 20th and now in the 21st Century, is Marlene (no last name - Carmen Zilles). She had been promoted to direct an employment agency and so she celebrates with this fictional dinner-party.

As the guests arrive one-by-one they are also introduced by live video images on a large screen behind them. This is done successfully and playfully by Jeanette Oi-Suk Yew. Here, the women talk about their lives to, then over each other, particularly as the party progresses and wine flows freely. The party is getting livelier and the text can only be heard in snippets to simulate a more chaotic scene as the party progresses. The table in center stage is most effectively used by Dull Gret, who jumps on top with a drawn sword. She indeed is a warrior. The women move about the stage individually, while getting their glasses filled. The party as a collection of guests forming a temporary community never happens, yet that was not the point.

In act two, now contemporary, we are introduced to a perhaps 16-year old Angie (played by a fabulous Herlihy) and her much younger friend, hiding out in the countryside, where they live. Here, super-imposed video images onto Angie and her friend appear to be distracting from the scene. Angie’s mother, Joyce (Ramos), repeatedly calls for her to come home. For the first time one becomes aware that Angie lives with developmental issues. She wants to visit her aunt Marlene in London and hopes to stay there. She confides to her friend that she knows a secret.

It was Angie, who manages to lure aunt Marlene back ‘home’ for a visit with herself and Joyce, her single mother. She is raising Angie and takes care of their aging parents, while Marlene is pursuing her career, void of any family responsibilities in London. A secret is being revealed during a tough exchange between the sisters.

Next we become acquainted with the staff at the employment agency. Then Angie arrives in London, without her mother’s knowledge, and presents herself at aunt Marlene’s place of work. What to do now?

The final scene, another flash-back, now between the two sisters in the countryside develops into a highly charged atmosphere.  It becomes apparent that the sisters stand firmly divided on opposite sides of social, economic and political issues and concerns. Marlene has become the hard charging manager in a man’s world. ---‘And what about Angie’ looms large.

Liesl Tommy, directed Top Girls also with an exceptional all women staff behind the scenes as outlined above. Tommy has a long history with the Huntington Theatre. It goes back to having been inspired there as a high school student while experiencing August Wilson’s Joe Turner’s Come and Gone. Since then, she directed  Huntington's Wilson play: Ma Rainey’s Black Bottom, as well as A Raisin in the Sun (Lorraine Hansberry) and Ruined (Lynn Nottage). The Huntington will honor her this May with the Wimberly Award and with it add recognition to her already distinguished career.

Caryl Churchill has written nearly 50 plays and The Royal Court Theater in London premiered a number of her works. In the USA it has been the New York Theater Workshop that presented first eight of her plays to an American audience. Over the years she has been awarded five Obies, Top Girls among them. She has always attempted to explore and express social issues and Top Girls is considered a Masterpiece. At age 79 she is still writing plays and Here We Go and Escaped Alone received the newest productions. Churchill’s work is highly regarded and according to fellow playwright Lucy Kirkwood: “Simply put, she is the only person today who says something new in both form and content every time she puts pen to paper.”

Top Girls would today perhaps be titled Top Women, yet the play is - much to my regret - still seriously current.