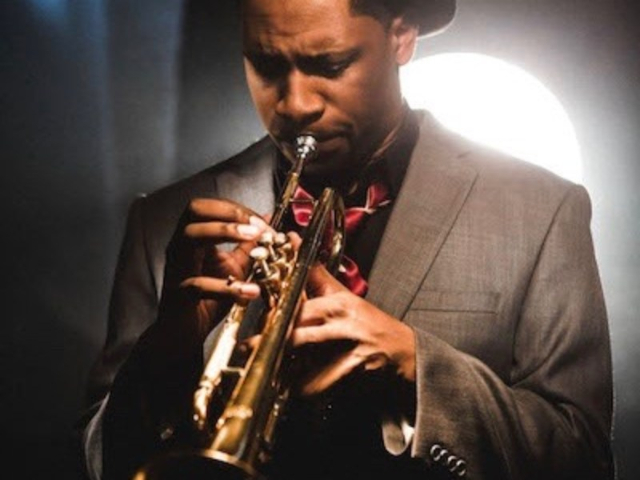 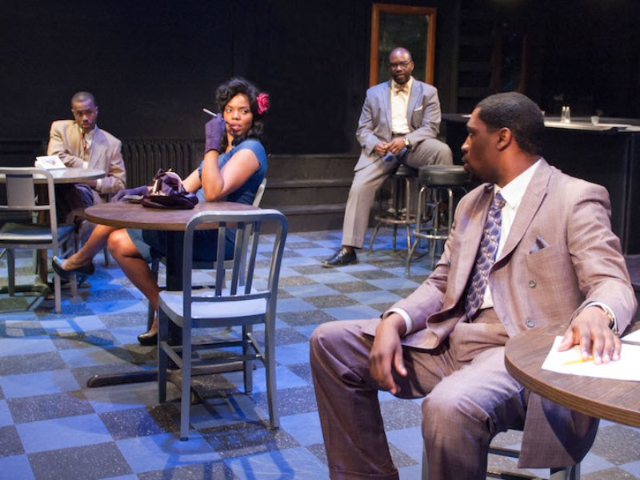 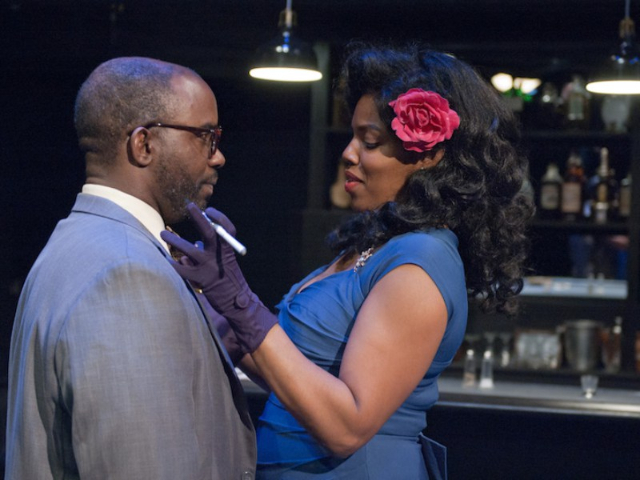 Paradise Blue by Dominique Morisseau muses on the troubled relationships of jazz musicians in an old jazz club, but she overlays their story with the political turmoil of urban renewal in 1949 Detroit. Timeline Theatre’s production adds a superb original score by Orbert Davis to accompany the cast of five, directed by Ron OJ Parson.

Blue (Al’Jaleel McGhee) rules his Black Bottom quartet and his Paradise Blue club with an iron hand. He’s the trumpet player and gets all the solos, to the dismay of Joe, the bass player, who also didn’t like the way Blue was handling the musicians’ pay. Joe quits (or is fired by Blue) and so the quartet is unable to perform without a bassist. Blue doesn’t seem to be in a great hurry to correct this problem. P-Sam (Charles Andrew Gardner), the percussionist, objects and the mild-mannered pianoman Corn (Cornelius, played by Ronald L. Conner) tries to keep the peace.

The Paradise Valley neighborhood of Detroit, known as a haven for great music and musicians, is going to be part of an urban renewal program. Blue has been talking secretly to city officials about selling his club, which was founded by his father and is a landmark in the neighborhood. Of course, secrets get out and P-Sam is indignant that Blue would sell the club. (The new mayor Cobo calls it clearing out the slums and “gettin’ rid of the blight in the city.”)

Pumpkin (a sweet and soulful Kristin E. Ellis) is Blue’s girlfriend and does most of the work around the club. She’s inspired by the poetry of Georgia Douglas Johnson, a poet of the Harlem Renaissance. Pumpkin reads poetry as she cleans and cooks and memorizes some of Johnson’s poems. She aspires to speak the poetry in public, but Blue insists she sing with Corn playing accompaniment, while the quartet is on hiatus. Losing a regular club gig was even tougher in those days than it would be today, because segregation reigned and black musicians were not welcome in white clubs.

The picture becomes more complicated with the arrival of Silver (Tyla Abercrumbie), a woman with a lot of charm and a pocketbook full of cash. She also has a reputation for being hard on men, especially her late husband. “How did he die?” Corn asks her. “I shot him,” Silver says.

Abercrumbie is sexually compelling as Silver as well as determined and dangerous. Gardner is also excellent as the jittery, volatile P-Sam. McGhee bristles with anger and emotion as the impassioned trumpet player. But his romantic relationship with Pumpkin doesn’t seem credible. We just don’t feel any chemistry between them.

The club Paradise Blue and its small stage are meticulously designed by Brian Sidney Bembridge. Christine Pascual’s costumes suit both the nattily dressed musicians and the two female characters. Christopher A. Kriz’s sound design makes Davis’ original music an authentic and ever-present musical background without ever overwhelming the drama.

While there’s not a saxophone in sight, the sound of John Coltrane’s iconic 1964 album, A Love Supreme, echoes throughout Paradise Blue. That can’t be an accident because playwright Morisseau uses the phrase “love supreme” several times in her script. The original music by Orbert Davis, artistic director of the Chicago Jazz Philharmonic, weaves a musical thread that beautifully supports and never intrudes on the drama. Davis’ prerecorded score includes members of the Chicago Jazz Phil and features saxophonist Rajim Halim. In particular, the track that plays during the last part of act two is reminiscent of Coltrane’s music.

Paradise Blue is the third play in Morisseau’s Detroit cycle, which was inspired by August Wilson’s Pittsburgh cycle. The other two plays are Detroit ’67, produced in 2013 by Northlight Theatre, which has scheduled the third play, Skeleton Crew, to open in January 2018. Timeline staged Morisseau’s Sunset Baby (set in New York) in 2016.

Paradise Blue continues at Timeline Theatre, 615 W. Wellington, through July 23. Performances are Tuesday-Sunday. The play runs 2.5 hours with one intermission. Buy tickets for $38-51 online or by calling 773-281-8463.