The Project(s) by American Theatre Company 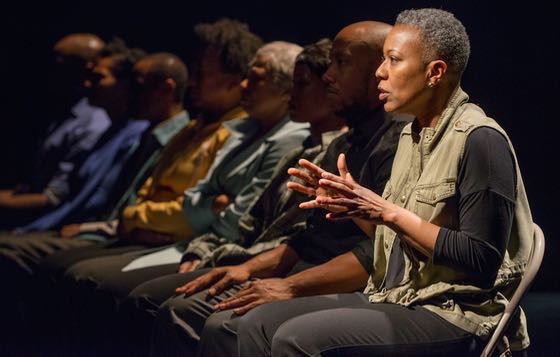 American Theater Company's brave new world premiere, The Project(s), is a lesson in Chicago history and an explanation of some of its present troubles. Writer/director P.J. Paparelli conceived the play to dramatize the experiences of residents of Chicago's public housing projects, past and present.

His docudrama isn't a dreary recitation of blame and political failure. The problems are not ignored, but the resulting production is a lively and thoroughly engrossing story in words, rhythm and music. The ensemble is made up of outstanding performers with diverse theatrical backgrounds. Each plays many roles as residents, victims, observers and public officials. The result is a fascinating and illuminating drama about the creation and destruction of community.

Paparelli and his co-writer, Joshua Jaeger, conducted about 100 interviews over five years with current and former residents of public housing, plus scholars and city officials. Paparelli worked with Jakari Sherman on choreography and music compositions to represent the sound and movement inspired by the community, including body percussion and dance forms like stepping.

The cast of five women and three men excel at their many dramatic and musical roles. It's hard to choose any of the performers as superior to others, but Kenn E. Head as historian Dr. Timuel Black is memorable, as are Linda Bright Clay and Joslyn Jones as friends, neighbors and building organizers. Penelope Walker is eloquent as a narrative voice and Stephen Conrad Moore is convincing as Dr. D. Bradford Hunt, a white social science professor, who provides research insights on the history and nature of public housing in Chicago. Omar Evans, AmJi White and Eunice Woods round out the outstanding ensemble.

"Just looking out of the window, Watching the asphalt grow, Thinking how it all looks hand-me-down, Good Times, yeah, yeah Good Times"

Looking at a projection screen, one actor says, "Robert Taylor. Yep. All this here was the Robert Taylor Homes. At the time, it was the biggest housing project in the country. I think there was like 27 to 28,000 people livin' there... Yes! I do not lie. And you want to know something? Everything you see here...gone. (Building projection fades.) Can you believe it? What a change! To witness something like this. And I keep askin', "Where are the people now, you know? Where'd they all go?"

The early development of public housing grew out of the progressive movement early in the 20th century, when the Great Migration brought 500,000 African-Americans from southern states to Chicago (more than 6 million moved from the Jim Crow South to the cities of the North, Midwest and West).

Dr. Black observes, "Families like mine came for three things: to vote, to get a better education for their children, and to protect themselves from the Ku Klux Klan." The settlers were concentrated in Chicago's Black Belt on the near south side. Low employment and unemployment created an environment of poverty and overcrowding in the available housing. Public housing was developed as a reformers' approach to improving the conditions in which poor people lived. Low-rise developments like Ida B. Wells and Wentworth homes were built in the late 1930s and '40s.

The 1950s development of public housing high-rises, built on the land formerly covered by black slums, was considered to be a grand improvement in residents' lives. The actors tell what it was like to live in the first low-rise public housing and how life changed in the high rises.

The architects and some planners favored high-rises; they saw them as "Towers in the park. Elevators, open-air galleries called sidewalks in the sky. This is cutting edge, very European." But they didn't foresee the problems of high-rise living, including maintenance problems, malfunctioning elevators and, of course, gangs. The high rises were sometimes called the "$70 million jungle" and the "Congo Hilton."

Finally, the high-rises are deemed a social failure and demolition begins on many of the large developments in the late 1990s. Some are replaced by mixed-income developments but most of the residents are moved out; their close-knit communities are destroyed.

The Project(s)' deceptively simple set was designed by William Boles. The backdrop is a projection wall -- "a massive concrete wall reminiscent of the façade of the Robert Taylor Homes" -- with eight smaller screens. Michael Stanfill's projection designs are displayed on both the wall and the screens; the images include enlarged historical photos and documents. A time clock at the top of the wall counts off intermission time. Props are eight folding chairs and eight moving boxes from which actors draw props and costume items. Christine Pascual's clever costume plan dresses each actor in basic dark colors to which they add jackets, sweaters, scarves and headgear to suit the scene.

The Project(s) will be staged through May 24 at American Theater Company, 1909 W. Byron St. Running time is 2-1/2 hours with two intermissions. Performances are at varying times Thursday through Sunday. Tickets are $43-48 and are available online or by calling 773-409-4125. A select number of free tickets is available for all performances for former and current public housing residents. Interested residents can call ATC at 773-409-4125 for details.