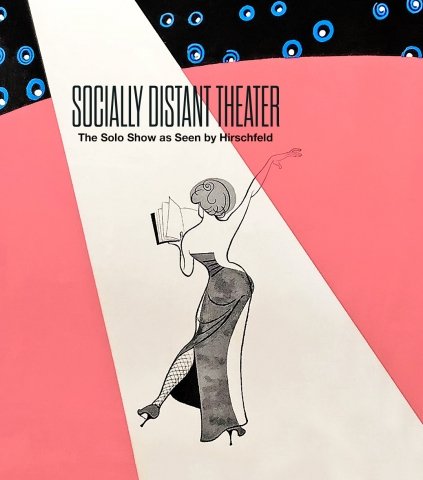 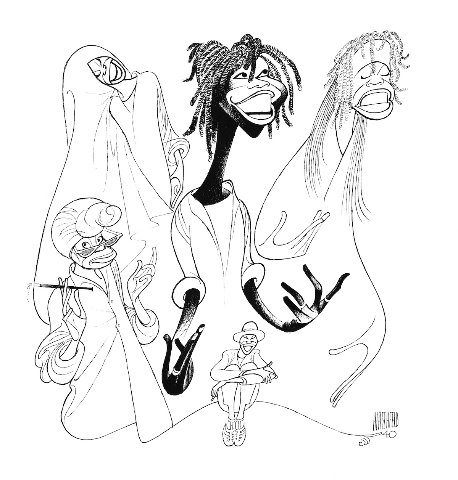 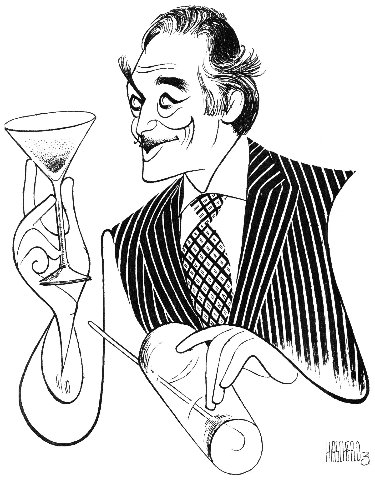 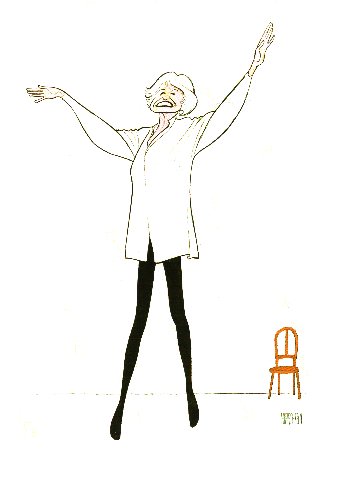 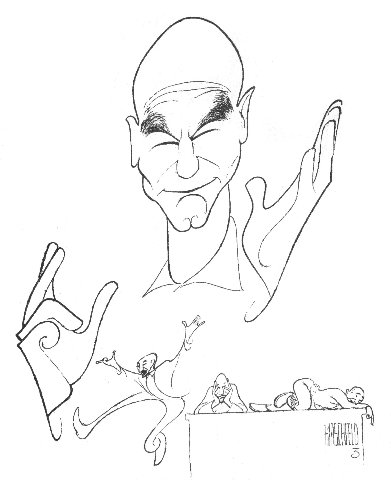 Patrick Stewart in A Christmas Carol, 1994 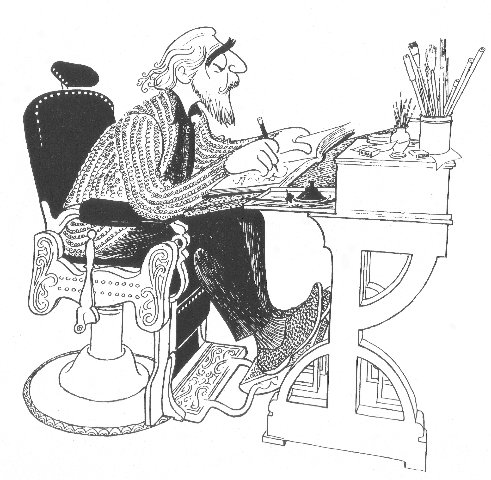 Self Portrait in Barber Chair, 1989 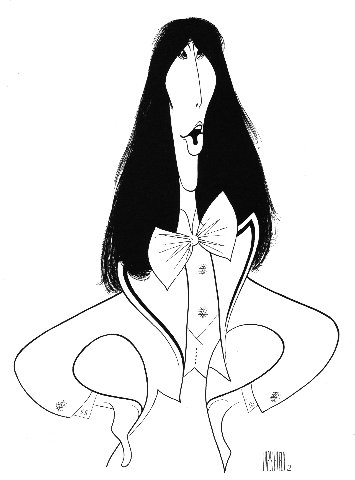 The Al Hirschfeld Foundation is proud to announce the first in a series of online exhibitions exploring the work of one of the most iconic artists of the last century. On May 11, the Foundation will open a special exhibition for these times: "SOCIALLY DISTANT THEATER: The Solo Show As Seen By Hirschfeld", a collection of 25 drawings, paintings, collages, and prints documenting a half century of one person shows. This special digital exhibit will be online for six weeks through June 20 at  AlHirschfeldFoundation.org/exhibitions before a new exhibition is presented.

"In the world of the theater, the one-person show is perhaps the best situation and the worst," writes David Leopold, Creative Director for the AHF in the introduction to the exhibition. "It is a supreme test of assurance and ability; of magnetism and charisma. But the format is also frightening; there's no one to play against, to lean on, to share the criticism. For an actor, if there is no one else to take the blame, there is also no one to share the credit with as well. The applause at the end is for only one performer. In many ways these performers are all caricatures in the sense they have exaggerated elements of their subject to bring a whole life or simply a story to life. So in essence, Al Hirschfeld, the ultimate solo artist, is the ideal portraitist for this unique form of theater."

In addition to showing the artwork in detail as it has never been seen before, throughout the exhibition are links to videos of parts or the whole of some of these solo performances. You can see Henry Fonda as Clarence Darrow, Julie Harris as Emily Dickinson, or Robert Morse as Truman Capote. Or you can see Eric Bogosian, Whoopi Goldberg, and John Leguizamo channel a seemingly endless parade of characters from their solo shows. It turns out being alone has never been so interesting

In keeping with the spirit of Hirschfeld, this exhibition is free and open to everyone. The show is part of the AHF's continuing mission to promote interest in the theater and the performing and visual arts. to support its arts education program, there is a special gift shop of merchandise connected to the exhibition at online at AlHirschfeldFoundationshop.org/SDT.

Go behind the lines of Hirschfeld's art with "The Hirschfeld Century Podcast," nominated as "Best NYC podcast" by the 2020 Apple Awards.  A special episode dedicated to the works featured in "Socially Distant Theater" will be available starting May 20 from AlHirschfeldFoundation.org/podcasts, iTunes and other popular podcast sits.

ABOUT THE AL HIRSCHFELD FOUNDATION

The mission of the Al Hirschfeld Foundation is to promote interest in the theater and visual arts by supporting non-profit museums, libraries, theaters and similar cultural institutions. The Foundation fulfills its mission through grants and exhibitions of Hirschfeld's art . The Foundation maintains an extensive collection of Hirschfeld artworks and lends and/or donates pieces to institutions all over the world. Another primary mission is arts education, which the Foundation does primarily with the Hirschfeld Arts Curriculum. Created in conjunction with the New York City Board of Education, The Hirschfeld Arts Curriculum is an innovative visual/performing arts education program based on Hirschfeld's art to engage students K through 12 in a variety of arts activities. Our programs encourage writing, reading, researching, observing, movement and performance to learn about the arts, its history, and the opportunities for education and employment in the arts field. The web based Al Hirschfeld curriculum is easy to use, and is intended to be a free resource for teachers and students.  www.AlHirschfeldFoundation.org

Al Hirschfeld's drawings stand as one of the most innovative efforts in establishing the visual language of modern art through caricature in the 20th century. A self-described "characterist," his signature work, defined by a linear calligraphic style, appeared in virtually every major publication of the last nine decades (including a 75-year relationship with The New York Times) as well as numerous book and record covers and 15 postage stamps. Hirschfeld said his contribution was to take the character, created by the playwright and portrayed by the actor, and reinvent it for the reader. Playwright Terrence McNally wrote: "No one 'writes' more accurately of the performing arts than Al Hirschfeld. He accomplishes on a blank page with his pen and ink in a few strokes what many of us need a lifetime of words to say."

In 1945, Hirschfeld celebrated the birth of his daughter Nina by placing her name in the background of a drawing. What the artist described as an innocent prank soon became a personal trademark and national obsession, as he began hiding numerous NINA's throughout his drawings for years to come.

He is represented in many public collections, including the Metropolitan Museum of Art, the Whitney Museum of American Art, the National Portrait Gallery, and Harvard's Theater Collection. Hirschfeld authored several books including Manhattan Oases and Show Business is No Business in addition to 10 collections of his work. He was declared a Living Landmark by the New York City Landmarks Commission in 1996, and a Living Legend by The Library of Congress in 2000.  Just before his death in January 2003, he learned he was to be awarded the Medal of Arts from the National Endowment of the Arts and inducted into the Academy of Arts and Letters. The winner of two Tony Awards, he was given the ultimate Broadway accolade on what would have been his 100th birthday in June 2003. The Martin Beck Theater was renamed the Al Hirschfeld Theater.