James Merrill on The Ring

One of America's Finest Poets Reminds Us of Golden Days 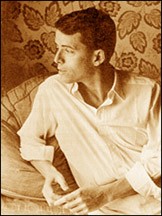 James Merrill wrote a poem on The Ring. 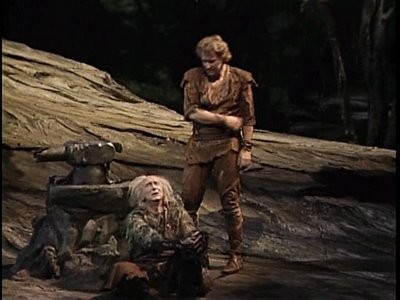 When The Ring rang out.

The Ring Cycle
by James Merrill

They're doing a Ring cycle at the Met,
Four operas in one week, for the first time
Since 1939. I went to that one.
Then war broke out, Flagstad flew home, tastes veered
To tuneful deaths and dudgeons. Next to Verdi,
whose riddles I could whistle but not solve,
Wagner had been significance itself,
Great golden lengths of it, stitched with motifs,
A music in whose folds the mind, at twelve,
Came to its senses: Twin, Sword, Forest Bird,
Envy, Redemption through Love . . . But left unheard
These fifty years? A fire of answered prayers
Buurned round that little pitcher with big ears
Who now wakes. Night. E-flat denotes the Rhine,
Where everything began. The world's life. Mine.

Young love, moon-flooded hut, and the act ends.
House lights. The matron on my left exclaims.
We gasp and kiss. Our mothers were best friends.
Now, as old mothers, here we sit. Too weird.
That man across the aisle, with lambswool beard,
Was once my classmate, or a year behind me.
Alone, in black, in front of him, Maxine . . .
It's like the Our Town cemetery scene!
We have long evenings to absorb together
Before the world ends: once familiar faces
Transfigures by hi-tech rainbow and mist,
Fireball and thunderhead. Make-believe weather
Calling no less for prudence. At our stage
When recognition strike, who can afford
The strain it places on the old switchboard?

Fricka looks pleased with her new hairdresser.
Brunnhilde (Behrens) has abandoned hers.
Russet-maned, eager for battle, she butts her father
Like a playful pony. They've all grown, these powers,
So young, so human. So exploitable.
The very industries whose "major funding"
Underwrote the production continue to plunder
The planet's wealth. Erda, her cobwebs beaded
With years of seeping waste, subsidies unheeded
--Right Mr. President? Right, Texaco?--
Into a glass-blue cleft. Singers retire,
Yes, but take pupils. Not these powers, no, no.
What corporation Wotan, trained by them,
Returns gold to the disaffected river,
Or preatomic sanctity to fire?

Brunhilde confronts Siegfried. That is to say,
Two singers have been patiently rehearsed
So that thier tones and attitudes convey
Outrage and injured innocence. But first
Two youngsters became singers, strove to master
Every nuance of innocence and outrage
Even in the bosom of their stolid
Middleclass familes who made it possible
To study voice, and languages, take lessons
In how the woman loves, the hero dies . . .
Tonight again, each note a blade reforged,
The dire oath ready in their blood is sworn.
Two world-class egos, painted, overweight,
Who'll joke at supper sided by side, now hate
So plausibly that one old stagehand cries.

I've worn my rings--all three of them
At once for the first time--to the Ring.

Like pearls in seawater they gleam,
A facet sparkels through waves of sound.

Of their three givers one is underground,
One far off, one here listening.

One ring is gold; one silver, set
With two small diamonds; the third, bone
--Conch shell, rather. Ocean cradled it

As earth did the gems and metals. All unknown,
Then, were the sweatshops of Nibelheim

That worry nature into jewelry,
Orbits of power, Love's over me,

Or music's, as his own chromatic scales
Beset the dragon, over Time.

Back when the old house was being leveled
And this one built, I made a contribution.
Accordingly, a seat that bears my name
Year after year between its thin, squared shoulders
(Where Hagen is about to aim his spear)
Bides its time in instrumental gloom.
These evenings we're safe. Our seats belong
To Walter J. and Ortrud Fogelsong
--Whoever they are, or were. But late one night
(How is it possible? I'm sound asleep!)
I stumble on "my" darkened place. The plaque
Gives off that phosphorescent sheen of Earth's
Address book. Stranger yet, as I sink back,
The youth behind me, daybreak in his eyes--
A son till now undreamed of--makes to rise.