With Bernadette Peters at Tanglewood July 5 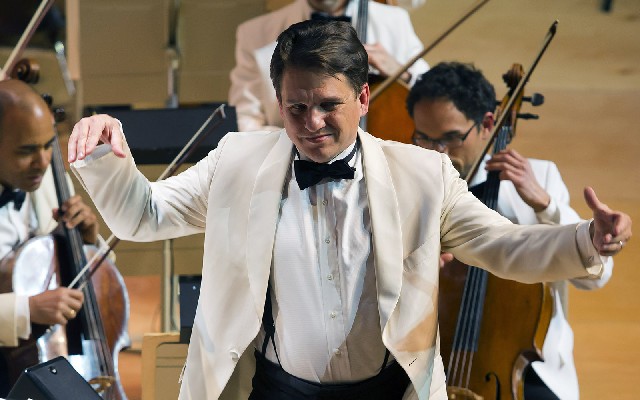 Keith Lockhart is celebrating 20 years with the Boston Pops. Photos courtesy of the BSO. 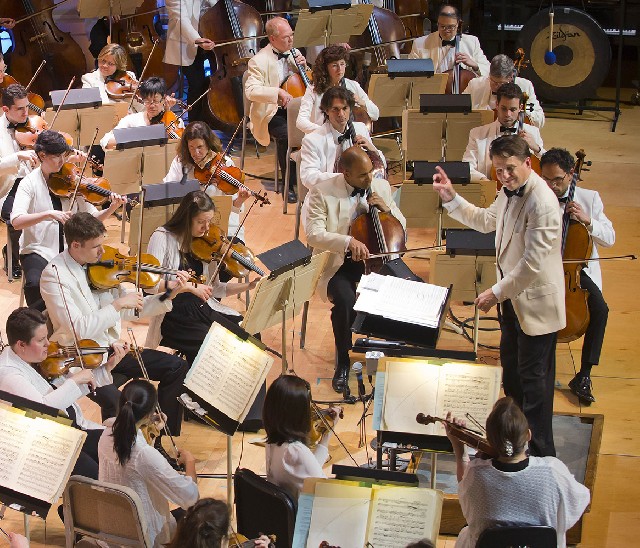 A rite of Spring. 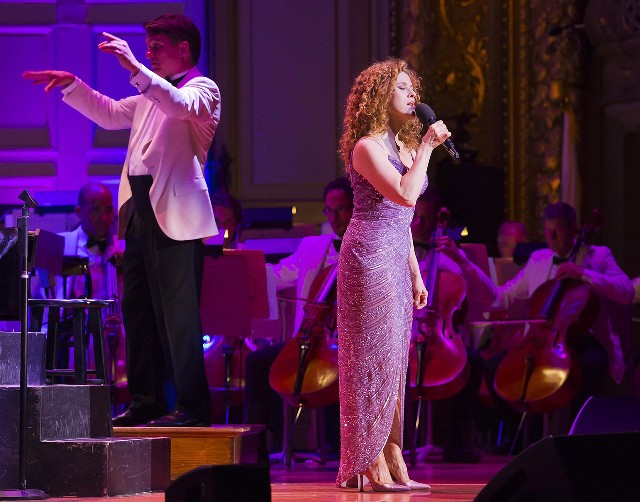 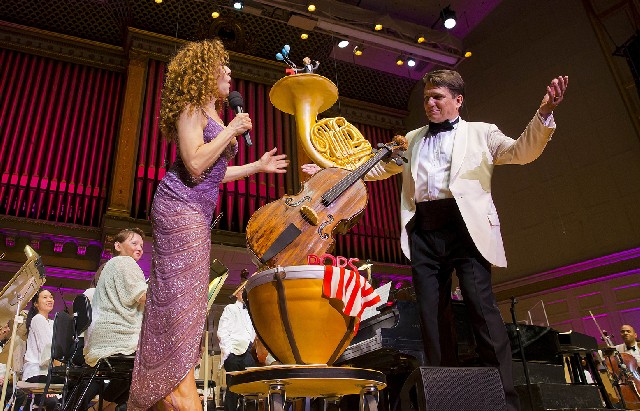 A fanciful cake to celebrate the occasion.

After a brutal winter, one of the worst on record, it was delightful last week to walk along Commonwealth Avenue magnificently in bloom with Tulip and Magnolia trees.

Since 1885 they have been pulling up the seats and arranging densely packed clusters of tables and chairs to create a cabaret setting. Food and drink may be ordered to enjoy with the lighter programming that as Pops implies often translates into symphonic orchestrations of popular music from Broadway to the Beatles.

The recent opening night marked the launch of the 20th season for conductor Keith Lockhart. While impressive it would take three more decades to catch up to Arthur Fiedler.

Under Fiedler's direction, the Boston Pops sold more commercial recordings than any other orchestra in the world, with total sales of albums, singles, tapes, and cassettes exceeding $50 million. The orchestra's first recordings were made in July 1935 for RCA Victor including the first complete recording of George Gershwin's Rhapsody in Blue.

As is traditional the evening featured an eclectic mix of music culminating with a cascade of balloons for the patriotic finale of "Stars and Stripes Forever." There was a medley of music celebrating the 100th birthday of Francis Albert Sinatra.

Opening the second half of the evening former TV arts personality, Joyce Kulhawik, recalled Keith's first night of Pops seated with his parents. He was taking over the baton from the renowned composer of film scores John Williams.

As part of the fun a vintage TV clip of that first performance was screened. It was fascinating to see a very young and obviously nervous Lockhart trying to be as precise as possible with very specific and punctuated movements of the baton. He seemed not quite assured that the orchestra of world renowned musicians would follow his lead.

The amusing clip ended with Lockhart continuing the score. There was a dramatic then and now contrast as having abandoned the baton he conducted with bravura flourishes of his expressive hands. Firmly in command Keith and the orchestra have an easy interaction. Even on the most schmaltzy material they give it all they have.

Taking a break from the heavy hitters the players appear to be having as much fun as the audience.

The featured artist for opening night was the Broadway star Bernadette Peters. With that signature curly coif and fine features, accented by a slinky sequined gown, she always evokes a cuteness more like a teenager than a woman in her sixties.

Clearly, she has a great affinity for Sondheim. It was our pleasure to see her in "Follies" a couple of seasons ago. The composer is notoriously complex and difficult to perform but Peters has just the right approach for the material. There was a nicely poignant rendering of "No One Is Alone" as well as Sondheim's enduring standard "Send in the Clowns."

While Peters has an adequate voice she knows how to sell a song and camp it up cavorting about the stage. There was engaging banter with the audience as well as good natured teasing of Keith. She vamped from sprawling seductively to telling an off color joke.

From "South Pacific" she reversed the gender of the male chorus to belt out "There Ain"t Nothin Like a Dame." In the stage version it is usual for the lonely sailors to perform the song in drag with grass skirts and coconut shells for ersatz tits. So it was a but tough to rap around the bawdy song sung, good grief, by a dame.

Taking a stab at a new song, a premiere in fact, she asked us to go easy on her. She didn't identify the tune but you immediately recognized that sultry, walking bass line solo of "Fever" performed by Mike Rivard.

It was the greatest hit of the late Peggy Lee who I was fortunate to see perform live. With her version embedded in my DNA, sorry, but I just didn't dig the Peters version. It was just too nice and didn't have the gutsy funk.

Lockhart and the Pops will end their Boston season with the traditional Fourth of July celebration from the Hatch Shell on the Esplanade. To "The 1812 Overture" the evening will climax with fireworks bursting oven the Charles River.

Moving west, on July 5, Peters is scheduled to perform with the Pops in Tanglewood. We have previously seen her in the Shed where she always wows the audience. In many ways she is the very essence of Pops.

Wednesday’s Opening Night concert set the stage for a season showcasing the wide ranging musical styles and entertainment made famous by the Boston Pops, “America’s Orchestra.” Highlights on Keith Lockhart’s 20th anniversary season include performances by Audra McDonald (6/2 & 6/3), a night devoted to the legendary musical theater genius Stephen Sondheim with the help of Marin Mazzie and Jason Danieley (6/10 & 6/11); and a brand new series—“By Popular Demand,” five concerts (5/7, 16, 26, 29, & 6/5) that offer concertgoers a chance to vote via cell phone, live during the concert’s entire second half, for the music to be performed. The season also welcomes debut performances of The Midtown Men—four stars from the original cast of the Broadway hit Jersey Boys— (5/19, 20, & 21), living legends of gospel, The Blind Boys of Alabama, on Gospel Night (6/6), and performers Carlos Núñez and Karen Casy as part of “A Celtic Sojourn at Pops,” hosted and curated by WGBH’s Brian O’Donovan for broadcast on his immensely popular radio program “A Celtic Sojourn.” Some of the most popular concert themes of recent years return to the Pops stage include the annual Film Night series led by Boston Pops Laureate Conductor John Williams (5/22 & 23); a performance of Cirque de la Symphonie complete with aerial flyers, acrobats, dancers, and jugglers (6/12 & 13); and a screening of the complete 1952 musical Singin’ in the Rain with live orchestra (5/8 & 5/9).