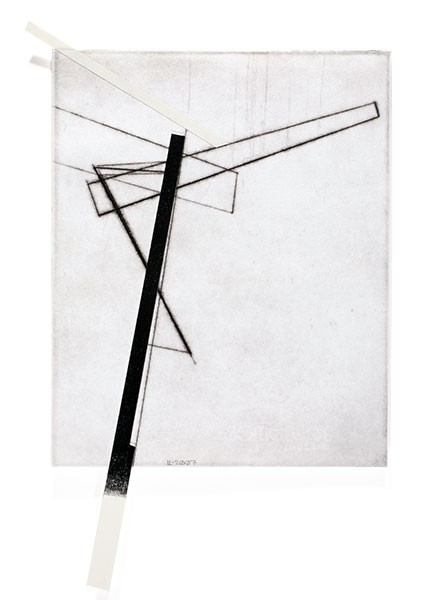 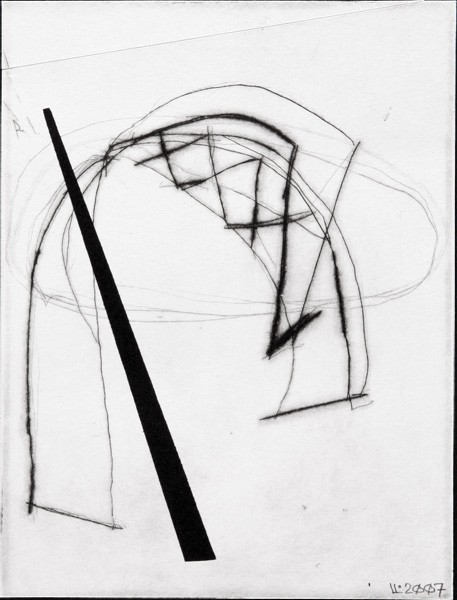 One aspect that continues to humble me about artists is their ability to focus. Perhaps it's their greatest talent Â… the attention they pay, and the way their work directs our attention to something we haven't seen before. Or maybe we've seen it, but never before had insight.

Lara Loutrel's very visual, formal work is easy to define (and dismiss?) at a glance: black and white linear abstractions. But in really spending time, and attention, on the score or so of works on display in the bright windowed alcoves of the South End Branch of the Boston Public Library this month, infinite variations emerge.

Paper, pencil, tape, different forms of marking (charcoal, carborundum, ink) are the tools used to create Loutrel's architectonic abstractions. All of these minimal compositions are defined by vectors of force, angles and edges that meet at crucial anchor points, and then swing off in pendulum arcs.

Loutrel's work begins with printmaking, etchings on small squares of paper that serve as the base layer for her collages and constructions. Her project unfolds in four main series in this show, each with its proper title: Arkh, construct, Device Construction, and a final mode let's just call freeform.

The Arkhs are all numbered, and are the most linear. They mix the delicate etched lines with embellishments in solid black or white. The printed paper has a dusty texture, as if it has been worked and re-worked, subjected to multiple erasures as the skeletal frameworks developed. The cutout additions are pristine and smooth, and serve to underscore those vectors in solid, asymmetrical geometric silhouettes. Many of these additions project beyond the borders of the base piece of paper, emphasizing a sense of direction and movement.

The Device Constructions add a new element: the circle, as if drawn by a compass. These concentric orbs are flat but sturdy, and contend with more solid shapes in black. "Device Construction 2" looks like a dark path leading towards a swollen setting sun.

The "constructs" are actually three-dimensional, but in very shallow relief. Next to the etched collages these arrangements of heavy paperboard take on a ponderous solidity. Is "Device" a reference to Jasper Johns' series of paintings under that name, each of which feature moving elements that seem to have done some of the painting themselves? Loutrel's assemblages are much more monochrome and minimal, but the use of tape and visible edges does leave the presence of gesture, of the movements of fingers and arms, at least on an implicit level.

Finally, a bit of whimsy from the freeform piece, beginning with the title: "Self-Portrait as Sputnik." This small work features the loosest drawing of all, and the only visible arch in a show inspired by architecture. This rickety horseshoe is like a wiry plant arbor, with loosely etched ellipses running through it. There's a winsome, self-deprecating quality to this tangle of curves, alone amidst all the solid right angles in the rest of the show. But then I shouldn't be surprised. Even the most serious of artists usually knows how to wink.