With This Project, Boston Has Become A Public Art Player 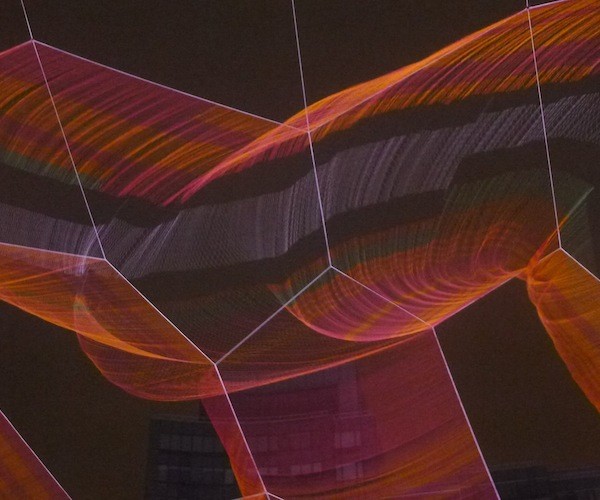 A detail (at night) of Janet Echelmanâ€™s aerial sculpture â€œAs If It Were Already Here.â€ 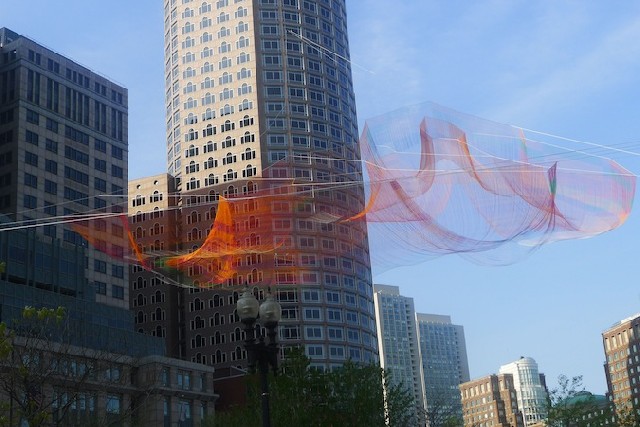 A full view (during the day) of Janet Echelmanâ€™s aerial sculpture â€œAs If It Were Already Here.â€ 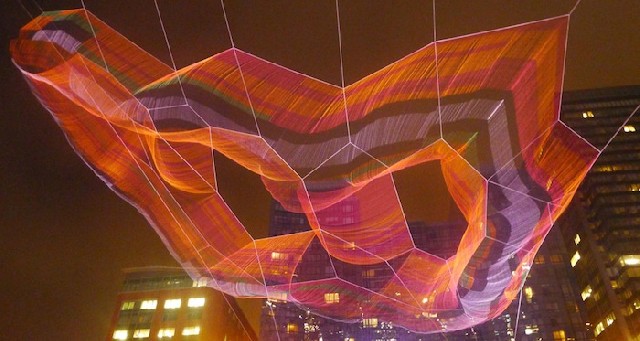 A full view (at night) of Janet Echelmanâ€™s aerial sculpture â€œAs If It Were Already Here.â€ All Photos: Mark Favermann

One glimpses a surreal vision when driving out of the Route 93 Tunnel at the Purchase Street Exit: a gigantic but benign jellyfish-like apparition is floating up in the sky. This diaphanous sculptural presence, gently dancing and fluttering in space, seems to be swimming on the wind. Artist Janet Echelman’s public art work, entitled As If It Were Already Here and hosted by the Rose Kennedy Greenway Conservancy, is a stunning achievement, an indelible image that manages to seem both ephemeral and permanent.

Obviously, Echelman’s aerial sculpture, which will be available for viewing until early October 2015, is a must-see for park visitors. Its monumental hovering presence emanates a visceral beauty; its soaring, ever-morphing shape, carried along on helter-skelter movements of air, can’t help but set the viewer’s imagination a sail. Note: the magical presence of this undulating, multicolored, cloud-like invertebrate structure is at its most powerful during nighttime than in the sunlight. The sculpture becomes almost transparent on bright days.

The aerial sculpture sets a wonderful precedent in terms of what it says about the city. Its bold freshness asserts a new, energized beginning, a creative rebirth for Boston’a built environment. The fact that it was installed at all represents a visual as well as cultural milestone for the City of Boston and the New England region. Another of its merits: following our terrible recent winter, this artwork is a much-needed visual Ode to Spring.

Utilizing a structural net to support a floating form, the artist explains that the shape, with its three voids, references the original three hills that looked over Boston’s early landscape. Its various colored bands also recall the elevated highway that, due to the Big Dig, is now located below ground, directly under the Greenway.

This complicated, rainbow-hued transparent cloud is a marriage of engineering and art. Set between supporting buildings, it is essentially a huge spider web that has been cleverly choreographed to serve as a structural air ballet. It is a delicate, gossamer construct that is not fragile but serenely supple, an ethereal environmental entity that seems to literally breathe.

Its materials and fabrication methods are gigantic as well. According to the Greenway administrators, over 100 miles of rope — between the soft net and the structural rope — was used. Weighing over one (1) ton, these linear elements were used to create over half a million (542,500) knots to make up the sculpture. Horizontally, the fabric sculpture covers 20,250 feet or almost half an acre.

Fabrication of the sculpture was made by hand-splicing rope and knotting twine into an interconnected mesh of more than a half-million nodes. The structural rope fibers are 15 times stronger than steel yet quite lightweight. This flexibility allows the sculpture to be strategically laced directly into three skyscrapers at four points of tension. Visually, this arrangement supplies a soft counterpoint to the hard-edged surrounding architecture.

This site-specific artwork was modeled in a software program developed by Studio Echelman in collaboration with Autodesk. A customized plug-in tool gave the studio the opportunity to test the feasibility of the design, allowing it to explore net densities, shape, and scale while simulating the effects of gravity and wind.

The artwork’s engineering and lighting design was done by international engineering behemoth Arup. It is lit with a total of 44 lumenpulse LED fixtures. The sculpture was erected by Shawmut Design and Construction along with riggers and crane equipment from Daniel Marr & Son Company.

An impressive number of crew members (around 50 people) and pieces of heavy equipment were required to install the environmental artwork. These included four 90-ton cranes, one 50-ton, one 115-ton crane and numerous smaller pieces of equipment that included various winches, grip hoists, and miscellaneous rigging gear.

Support for this project came from several private foundations, with a major gift from the Smith Family Foundation as well as grants from the National Endowment for the Arts (NEA), NEFA’s Fund for the Arts, and ArtPlace America.

With this one project, Boston has gone from a public art also-ran community to a serious global player. Unlike previous Greenway projects (and most of the other Boston-area public art pieces), Echelman’s aerial sculpture puts us in the big leagues. Along with the awe-inspiring quality and scale of this soaring sculpture, the nervy innovation of this artwork breaks new ground (or rather air); not only for the Greenway, but for the city as well, given Boston’s current bid for the 2024 Olympics and its 400th Birthday in 2030.

This gigantic floating art installation confirms, with a truly dazzling flourish, that Boston has demonstrated that big public art can be wonderful. We no longer need to be skeptical about making grand gestures: the city has successfully become a heavyweight participant in the 21st Century public art competition. “As If It Were Already Here” is about leaving history behind and welcoming the future. The bar has been set very high — but all systems are now go.

This article is republished by permission of Arts Fuse where it was first published.