Built in 1820s Near Philadelphia 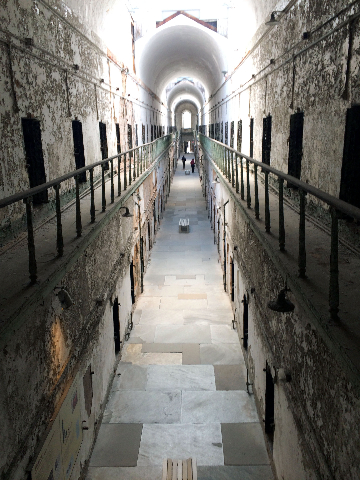 When it opened in 1829, Pennsylvania’s Eastern State Penitentiary was the largest and most expensive public structure in the country. Photo Credit, Susan Cohn/Daily Journal.

REPENTANCE SHALL SET YOU FREE: PHILADELPHIA’S EASTERN STATE PENITENTIARY STANDS AS A PROTOTYPE OF PRISON REFORM.

Before Pennsylvania’s fortress-like Eastern State Penitentiary was built on the then-outskirts of Philadelphia in the early 1820s, jails had traditionally been dirty, overcrowded rooms where prisoners were subjected to brutal treatment by the guards. Then, in 1787, The Philadelphia Society for Alleviating the Miseries of Public Prisons was formed. Among the founding members were Benjamin Franklin and Dr. Benjamin Rush, both signers of the Declaration of Independence. The Quaker-inspired group believed that imprisonment should change an inmate by making him regret his misdeeds and seek a better life. Their goal was to build a prison designed to create penitence in the criminal’s heart - a true penitentiary. From their vision was built Eastern State Penitentiary, opened in 1829. It was the largest and most expensive public structure in the country to that date and, soon, would be one of the most famous prisons in the world.

At Eastern State, prisoners served their terms in isolation. In a skylit cell, the prisoner had only the word of God (the Bible) and work (such as shoemaking or weaving) to fill his thoughts. The prison was totally silent and the guards even wore coverings on their shoes to muffle the sound of footsteps. Inmates were hooded whenever they were outside their cells so that they would have no knowledge of the layout of the building and would not be able to interact with other prisoners or even with guards. The entire function of Eastern State was to impel the criminal to look inward, to reflect and to change.

The novel architecture of Eastern State reinforced the experimental prescription of isolation combined with labor. British-born architect John Haviland designed seven cellblocks that radiated from a central surveillance rotunda. Each prisoner had a private cell, centrally heated, with running water and a flush toilet. (This was in an age when the White House, with its new occupant Andrew Jackson, had no running water and was heated with coal-burning stoves.) Adjacent to each cell was a private outdoor exercise yard surrounded by a ten-foot wall.

THE WORLD COPIES THE PENNSYLVANIA SYSTEM.

Prison reformers came to Philadelphia to study the Pennsylvania System and its architecture. During the century following Eastern State’s construction, more than 300 prisons in South America, Europe, Russia, China, Japan, and across the British Empire were built based on its design. Eastern State’s distinctive geometric form and its regimen of isolation became a symbol of progressive, modern principles.

STEVE BUSCEMI AND THE HEEBIE-JEEBIES.

Eastern State was closed as a prison in 1971, but is now a popular visitor destination. Admission includes an Audio Tour narrated by actor Steve Buscemi (Fargo, Boardwalk) that features the real voices of former officers and inmates. Matt Murphy, Eastern State Penitentiary’s Tour Programs Supervisor, said, “It’s always fun to watch a person walk through Eastern State Penitentiary’s massive, iron front gate for the first time. Though everyone reacts a little bit differently, the visitor’s face usually says it all.  A wave of uncertainty, awe, curiosity, and/or excitement washes over. Some ask questions. Some crack jokes. Some are stricken with a visible case of the heebie-jeebies. Everyone, however, seems to appreciate that they are entering a place of profound history and great significance.”

HALLOWEEN BEHIND THE WALLS AT EASTERN STATE PENITENTIARY.

Every October the prison is home to Terror Behind the Walls, one of the nation’s largest haunted attractions. The long cellblocks are the stages on which 200 performers combine with special effects, lighting, digital sound, animatronic creatures and custom props. Visitors can become even more fully immersed in the action by marking themselves to be grabbed and taken into hidden passageways.

Two or three hours’ walking will carry me to as strange a country as I expect ever to see. Henry David Thoreau.