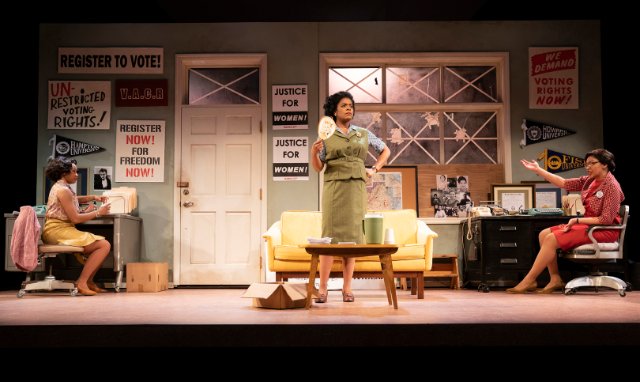 Cadillac Crew, the world premiere play by Tori Sampson, now at Yale Rep through Saturday, May 18, focuses on a part of the history of the civil rights movement that has long been neglected: the role of the African-American women who were activists in the movement.

Many may recall the purported statement by Stokely Carmichael that “the position of women in the movement should be prone.”  While some say the context of the remark makes it less offensive, the truth is it was repeated multiple times by Carmichael and reflected the view of many male leaders of the movement.

Even for many women, the role of women as leaders in the movement was a dilemma. They recognized that the black man had suffered severely from the segregation and denigration of their status as men. So the argument was that the men should lead and women follow because the men needed the status and self-esteem. Being challenged by women for leadership would deny them that.

But of course the period was also the period of women’s liberation and the African American women felt that they had been discriminated against because of both their race and their gender.

Despite the Rosa Parks and Fannie May Hammers, it was a patriarchal movement and women were relegated to mainly “womanly tasks” – bake sales, providing food, cleaning up, doing clerical work while their voices and suggestions were ignored or patronized.

The play opens in the early 1960s in a civil rights office in Virginia. The leader – Rachel Helen Christopher has arranged for Rosa Parks to come and to speak to a group; it is the big day. But will it actually happen?

Act I, while Parks is en route,  takes place in the office with Rachel and three other women: Abby a recent college graduate; Dee , a mother whose teenage daughter has just been assigned to the “white” high school; and Sarah a white woman whose grandmother has been an activist in many causes.

Rachel is the single-minded leader of this group. She wants women’s voices to be heard and for them and her to be in the history books. Abby is dedicated but looking for her own place in the movement, she chafes at Rachel’s attitude of superiority. Dee is committed yet also goes home to make sure her husband has a cooked dinner at night; the fact that Rachel isn’t married makes her less of a woman to Dee.

As the first act progresses we learn about the male-female dynamic in the movement; a young, inexperienced man is given power over these women. Two events occur – one is tragic: two friends of Abby’s are killed while part of a Cadillac crew. If you’ve never heard of these and I hadn’t, it is just one more example of how women’s roles in the movement were pushed aside. Cadillac crews were groups of women (usually two Black and two white) who drove throughout the south in their cars. They would motivate and organize groups of women to the cause. It could be dangerous for those who helped them and the crews themselves.

The second event is that the women learn that the men have decided not to let Rosa Parks speak and obviously not to let Rachel introduce her.  Act one ends with Rachel declaring that the four women will form their own “crew” and drive through south keeping journals that she expects will be published.

Act two is on the road as Rachel, Abby and Sarah are into the journey that goes on for weeks. You hear from individual journal entries. Dee later joins them.

The play ends with the four actresses playing other characters; it is today and they are part of a NPR radio show talking about current race relations and women’s history or “herstory” as they call it.

Like many new plays, Act 1 is definitely the better; the second half of the play veers off in other directions and adds plot complications that simply muddy the water. It doesn’t help that whatever takes place on the journey is told not seen and too much time is spent reciting either journals or Rachel’s comments about her speeches that she is constantly practicing in the car to the frustration of the others.

The journey part of the act ends on an unresolved note which is further frustrating.

The last part of the play is the most polemical and is more like a lecture aimed at the audience than an integral part of the drama. It is clear that Sampson believes we cannot make the connection from the ‘60s to the present without a lecture.

This production is apparently co-directed by Jesse Rasmussen and Sampson; I have found that new plays are seldom served when the playwright is also directing. A more objective point of view is needed.

Jessie Chen has done the scenic design, creating a realistic office in act 1 and a less realistic road for act 2.

Chalia La Tour plays Rachel as a woman who is dedicated but also rigid in her thinking and views. She is not pleased with anyone questioning her, and she believes she has earned the right to make the decisions. She also very much wants to be in the history books. She captures many parts of the character but it was often difficult to understand her. Not only did I lose much of her dialogue but so did various audience members I asked; it appeared to be a combination of accent, very quick speaking and a tendency for a clenched jaw.

The problem is that La Tour doesn’t make Rachel to be more than a “bossy” woman who we can find likeable or sympathetic. The other actresses have similar problems: Dria Brown as Abby, Ashley Bryant as Dee and Brontë England-Nelson as Sarah do yeoman’s work with basically one-dimensional characters. That each of these performers manages at times to make the characters more is to their credit.

Cadillac Crew is a frustrating work because the underlying ideas – the role of women in the civil rights movement and even the Cadillac crews is fascinating; unfortunately this play not only brings in too many other issues, but it doesn’t recognize what might be the most compelling story.