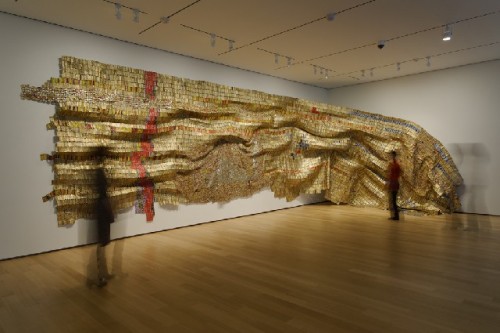 Intermittent Signals by El Anatsui at the Clark Art Institute in Williamstown. 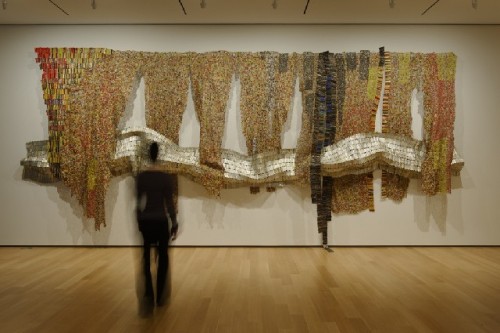 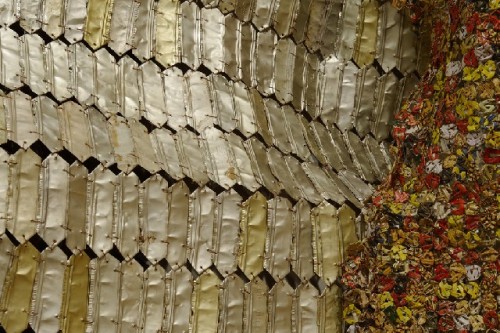 A detail of joined found materials by the African artist El Anatsui. 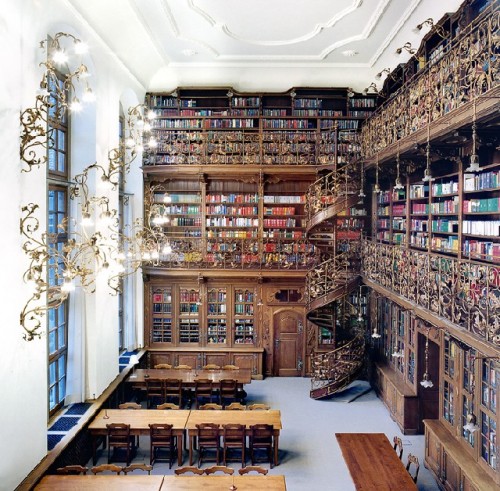 Large format photographs by Candida Hofer on view at the Clark. 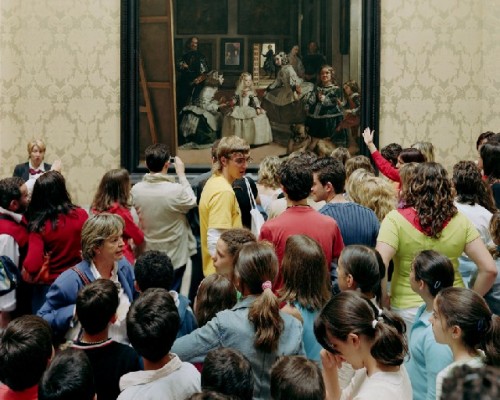 Typically Thomas Struth photographs in museums such as this shot in the Prado.

The works of contemporary European and African artists will take their place alongside French Impressionism in summer 2011 at the Sterling and Francine Clark Art Institute. From June 12 through October 16, visitors will encounter the monumental sculptures of acclaimed artist El Anatsui in the Clark’s Stone Hill Center, and from June 12 through September 5, Spaces: Photographs by Candida Höfer and Thomas Struth will be on view in the Clark’s original 1955 museum building. These contemporary art installations will be on view concurrent with the Clark’s highly anticipated summer exhibition, Pissarro’s People, which will focus on the personal ties and social ideas of Impressionist master Camille Pissarro.

“The Clark is proud to present these two installations featuring works by three of the most interesting artists working today,” said Michael Conforti, director of the Clark. “The range and depth of exhibitions presented this summer speak to the institution’s expanding cultural horizons and our ongoing commitment to furthering intellectual exchange.”

El Anatsui will present three of the artist’s compelling sculptures within the two galleries of Stone Hill Center. Hand wrought of found aluminum wrappers from liquor bottles, Anatsui’s sculptures arduously marry textile design and patterning from Nigeria and Ghana with modernist grid-based abstraction. The opulent beauty of these works provides a fascinating counterpoint to the questions they raise about waste, consumerism, and the legacy of colonialism.
When discussing the origins of the metal sculptures, El Anatsui has described finding a bag of liquor bottle tops near his studio.

He saw these tossed-away objects as the material that could bear witness to the complex links between Africa and Europe. Bottles of liquor, brought initially by Europeans as a commodity good, became a staple in the trans-Atlantic slave trade. Anatsui recognized the formal and aesthetic qualities of the material, but also found a means to express how these objects have marked and imprinted African and global history. A critical element of Anatsui’s work is the freedom he permits those who install his sculptures. There is no set or mandatory configuration. Those who install the work manipulate the flexible metal into the order that seems to fit the particular space—or perhaps the character of the collector or institution. This openness to the properties of his chosen material relates to Anatsui’s conception of history as something individuals are capable of changing and influencing. Through this approach, Anatsui creates a network of individuals as intricately woven as his glimmering materials and points to the larger question of what it means to be a truly global artist.

Although they had been widely exhibited for more than 30 years, El Anatsui’s works came to the attention of global audiences with their inclusion in Africa Remix, a landmark exhibition presented internationally from 2004 to 2007. Born in Ghana and living in Nigeria, his participation in major exhibitions such as the 2007 Venice Biennale and Who Knows Tomorrow at Berlin’s Nationalgalerie in 2010 established Anatsui as one of the most significant artistic innovators of our time. Until June 26, Anatsui’s work can also be seen at the Davis Museum at Wellesley College in an exhibition that will later travel to the Museum for African Art in New York as part of a major national tour.

Two of the works that will be installed at the Clark, Intermittent Signals (2009), a dramatic piece measuring 11 x 35 feet and Strips of Earth's Skin (2008), measuring 10 x 22 feet, are on loan from the Broad Art Foundation, Santa Monica, California. The third work, Delta (2010), a new work measuring 11 x 11 feet, will make its museum debut at the Clark and is on loan from a private collection. The works will be shown in the Tadao Ando-designed Stone Hill Center in two intimate, naturally lit galleries offering landscape views.

A publication will be produced in conjunction with the installation, which will include an essay by Alisa LaGamma, Curator in the Department of the Arts of Africa, Oceania, and the Americas at the Metropolitan Museum of Art, and an interview with El Anatsui conducted by former Clark fellow Chika Okeke-Agulu, Assistant Professor in the Art and Archaeology Department at Princeton University. David Breslin is guest curator of the installation.

The Clark also is pleased to offer a range of special programming to complement the work of El Anatsui. On July 24 renowned curator and filmmaker Susan Vogel will screen her documentary entitled Fold Crumple Crush: The Art of El Anatsui and deliver a talk about the making of the film, which follows the artist for three years and gives an insider’s view of the artist’s practice and techniques. Additionally, a Ghanaian storyteller will present weekly tales on the picaresque balcony of Stone Hill Center.

The large-scale photographs featured in the installation Spaces: Photographs by Candida Höfer and Thomas Struth offer distinct but connected perspectives on the ways individuals interact with the spaces they inhabit. Trained together at the Kunstakademie (Arts Academy) Düsseldorf in Germany in the 1970s, Höfer and Struth have embraced photography as a medium of social, cultural, and historical purpose, choosing public spaces as their subjects.

Both Höfer and Struth engage with history and the passage of time. Höfer’s photographs of libraries, auditoriums, and research centers are uninhabited by people but filled with light and the mystery of visual and intellectual contemplation. Although the architecture of these monumental rooms conforms to a symmetric logic, the photographs are pervaded by a sense of loss as the use and significance of the spaces have shifted over time. Struth’s works capture church and museum visitors engaged in the act of looking, as we, the viewers of the photographs, observe them from a physical and temporal distance. This reflexive impulse allows us to experience several historical moments at once, both inside and outside of the picture’s frame.

Given that both artists were raised in post-war Germany, when the country was literally rebuilding itself, the weight of history is particularly powerful in their work. Struth’s Audience 7, Florence, 2006, for example, merges several layers of past and present. The awe-struck, t-shirt-clad tourists are looking up at Michelangelo’s monumental sculpture David (1503), which stands in the eighteenth-century Galleria dell’Accademia (Gallery of the Art Academy). Although the sculptural object of their inquiry is largely invisible to us, the space in which the tourists stand provides a potent architectural backdrop. The intersection of time is arrested by the central male viewer who looks directly out at us with David reflected in the sunglasses that hang from his shirt. Struth embraces these complex, trans-historical strata of meaning to investigate the abiding experience of looking at art.

Höfer’s photographs likewise capture moments that are at once immediate and timeless. The lack of figures in these works, as the artist herself has explained, in many ways evokes their presence. Gleaming wooden surfaces and endless rows of books are housed in an ornate Gothic Revival reading room in Juristische Bibliothek München II 2000. Bright spots of light within the elaborate wall sconces and the daylight from the windows—emphasized by long exposure times—seize the moment in which the camera’s shutter opened and closed in the year 2000.
Ten works by Höfer will be installed at the Clark, including Igreja da Ordem Terceira Secular de São Francisco Salvador Bahia II 2005, Wikingmuseum Oslo I 2000, and Zentralinstitut für Kunstgeschichte München IV 2000.

Spaces will be presented in the Clark’s main galleries, usually dedicated to works by Impressionists. Many of those works are currently being presented at the Palazzo Reale in Milan, Italy, as part of the Clark’s international tour Great French Paintings from the Clark (in Italy: Impressionisti. Capolavori della Collezione Clark), which travels on to the Musée des impressionnismes, Giverny, France, for a July 13 opening, and then to additional venues in Europe, North America, and Asia.
.
The Clark is located at 225 South Street in Williamstown, Massachusetts. The galleries are open Tuesday through Sunday, 10:00 am to 5:00 pm (daily in July and August). Admission is free November through May. Admission is $15 June 1 through October 31. Admission is free for children 18 and younger, members, and students with valid ID. For more information, call 413 458 2303 or visit clarkart.edu.