Filling His Father Herschel's Boots an Original Tevye on Broadway 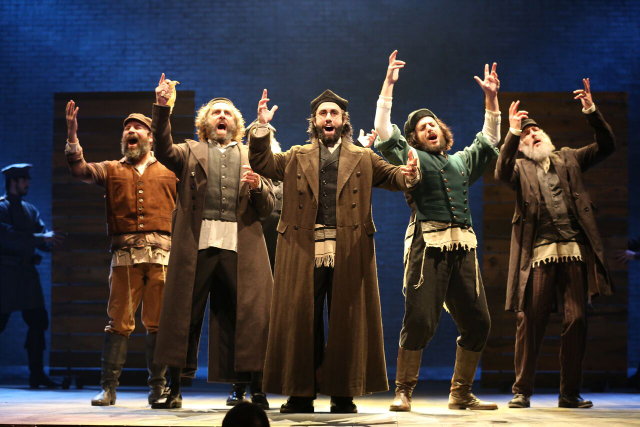 The Broadway revival of Fiddler on the Roof. 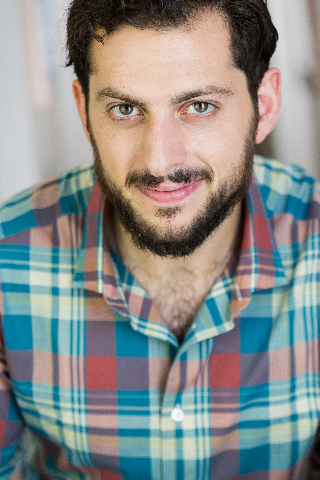 For Michael, his dad has come alive through anecdotes told by “little Jewish ladies.” They’d “pinch his cheeks” while telling him how skillfully his father played Tevye on Broadway over three years and 702 performances, beginning in 1965.

Bernardi, Zero Mostel and Topol were among the actors who played the iconic role of the poor dairyman in a Russian shtetel during the turn of the century.

Tevye tries to pass down his traditions to his children. Meanwhile, the tradition of playing the role has passed down from father to son in the Bernardi family. Bernardi plays Mordcha the InnKeeper, but understudies the role of Tevye in the current multi-Tony award-nominated Broadway revival, including Best Revival of a Musical.

But it’s not merely the fictional character’s footwear into which Bernardi has stepped. It’s literally his father’s boots.

He dons them even while playing Mordcha. For Bernardi, wearing the boots is a way of honoring the memory of his father…and to experience what it might be like to be a father, a figure who has been absent from his life.

“The role of Tevye, to me, is coming to terms with being a father,” said the 31-year-old Bernardi, who has no children.

Bernardi said sometimes, from the wings, he’ll watch Danny Burstein, who regularly plays the role and feel as though he’s watching his father.
“It’s like getting a front row seat to a memory I was never present for,” Bernardi said.

Emotions wash over Bernardi as he sees and hears Burstein as this “bearded gentleman” singing the songs his father sang and donning the same type of shtetel garments.

Since the production opened late last year at the Broadway Theatre, the need hasn’t arisen for Bernardi to fill in for Burstein. But Bernardi is itching to do so, even though he plays Tevye during rehearsals for understudies, all of whom practice in regular clothes.

This past summer, Bernardi played Tevye at a Massachusetts theater. Sometime before the run began, his mother showed him a box which contained his father’s Tevye costume. Bernardi was surprised; he’d seen the costume years before, probably during his teenage years, but didn’t know his mother, Teri, still kept it. Mother and son took out the clothes, put it to their noses and inhaled.

Terri asked her son if he wished to don the costume.

“Do you think I should?” he asked.

She reminded him of her late husband’s saying: If you have a piano in your home, you should play it; there’s nothing worse than a silent piano. The message was clear: “Play” the clothes.

A week before the production opened in Massachusetts, Bernardi was in his dressing room when he received a care package. Sure enough, it was his father’s costume.

Bernardi was about to don the shirt, but hesitated; a “terrifying realization” swept over him – as soon as he performed in that costume, the smell would be gone. To Bernardi, that smell represented a tangible memory of his father.

The young actor’s body convulsed and tears streaked down his face. He spoke to the costume as though it were an old friend. Bernardi looked up as though searching into heaven and said “I don’t know if I should wear these clothes.

“Papa, can I wear your clothes,” he asked, still looking up.

He recalled that after he posed the question, a “synapse” fired in his head which didn’t feel as though it came from within him.

The voice, or whatever it was, simply responded “your clothes.”

Bernardi put on the costume. Once it was on, he felt like “an incredible hug” enveloped him, one that he’d never received before. He wore it for the production.

To this day, Bernardi wears his father’s boots when he’s onstage as Mordcha. And he’ll do the same if he’s called on to replace Burstein.
“For me, it’s stepping into the role of the father for myself,” Bernardi said. He added he feels the greatest way he can connect with his father is to understand for himself what it might be like to be a dad. Having that understanding “brings my father from the epic legend that I’ve heard about from all these little old Jewish ladies to a human being.”

He’s also seen clips of his father’s performance. He said it has inspired him to “find that same fun and levity.”

Herschel Bernardi was an “incredible communicator with his voice and entire being,” his son said. He added “as much as my father inspires me, I strive to (perform the part) in my own way, from my own experience.”

Bernardi received a glowing review in the Patriot Ledger for his performance as Tevye at the Priscilla Beach Theatre in Massachusetts. The paper raved about the entire production.

“Bernardi’s late father, Herschel Bernardi, was one of the original Tevyes on Broadway,” the writer, Jim Dorman, wrote last July. “Michael honors him with this versatile performance and literally steps into his shoes by wearing the same boots he wore when he played Tevye many years ago.

“Michael is unshakable as the poor Jewish dairyman, husband and father of five daughters who struggles to navigate a changing world while honoring age-old customs and beliefs. He nails pivotal scenes, some comic, others emotional and a few terrifying, with just about every character…Other than being a few years younger than Tevye, Bernardi looks, sounds and moves the part, especially adding some distinctive gyrations to the character’s Yiddish dance steps.”

“I feel humbled,” Bernardi said after he was asked his reaction to the review. “I feel incredibly grateful that I was able to communicate the story.”
It’s a story that is “so deep within” his being, the performer said.

Playing Tevye is “like a reunion,” he said, adding many of his ancestors played in the Yiddish theater and had died by the time he turned 10.
Aside from the personal feelings playing Tevye invokes in Bernardi, the role is rewarding in general for an actor, Bernardi said.

“It’s sheer bliss to be in a role like Tevye,” he said. “It’s like the Hamlet of musical theater.”

There aren’t that many roles that allow an actor to experience such an intimate connection with an audience, Bernardi said.

Experiencing such a connection with an audience is nothing new to Bernardi. It wasn’t just family members, but the late comedian Robin Williams who inspired Bernardi to perform at a young age. He recalled seeing Williams perform live when he was just 3.

While he didn’t understand most of Williams’ jokes, he recalled noticing how the iconic comedian seemed so free and appeared to have “so much fun” on the stage. That’s the life he wanted to lead, Bernardi recalled thinking.

He said his mother dealt with her husband’s death by surrounding herself with friends. Young Michael got used to being with adults and he’d regale them with jokes. Those audience members encouraged his mother to enroll him in classes at the world famous Comedy Store on Sunset Boulevard.

By the time he was 9, Bernardi was performing in front of a packed house in the club’s Original Room, “making crowds laugh uncontrollably,” according to press material.

He experienced such success that some comedians felt it was unfair that Bernardi, as a “little kid,” was securing the best time slots without “learning the ropes,” he said.

At that point, he told his mother he just “wanted to be a kid” and she ensured he was. He played pee-wee football and went to school like his classmates, but he also continued to perform in school productions.

Bernardi said his father, who also performed as a youngster, was a “has-been” by the time he turned 12. Michael said for him, that label applied to him at 10. His father couldn’t get a job again until he was 30 – and the same held true for the younger Bernardi.

He attended Suny Purchase Conservatory of Theatre Arts in Upstate New York, where he studied the works of great playwrights. After receiving his Bachelor of Fine Arts degree, graduating and moving back to Los Angeles, Bernardi experienced little success while trying to start a career in Hollywood.

But Bernardi always dreamed of starring on Broadway and, in particular, performing in “Fiddler on the Roof.”

He got that chance after sending in an audition tape for the current Broadway revival and getting cast. Bernardi said the musical “speaks to his soul” and “very clearly connects him to that old world of ancestors.”

“It’s an incredible story,” he said. “It’s one of those shows that structurally, it’s so brilliant you don’t get tired of it.”

He added the music “has such a different quality than what the ear is used to.” The musical, based on the short stories of Sholem Aleichem, “always sounds different and new just as it sounds ancient and bold.”

Bernardi has performed in the production since it began previews on Nov. 20. He’s impressed with the work of Burstein, who was nominated for a Tony for Best Performance by an Actor in a Leading Role in a Musical.

He referred to Burstein as a “machine” in his ability to continuously play Tevye, day after day, night after night, without missing a performance.
He said some family members have jokingly offered to do the unthinkable to get Bernardi onstage, as Tevye, during a regular performance.