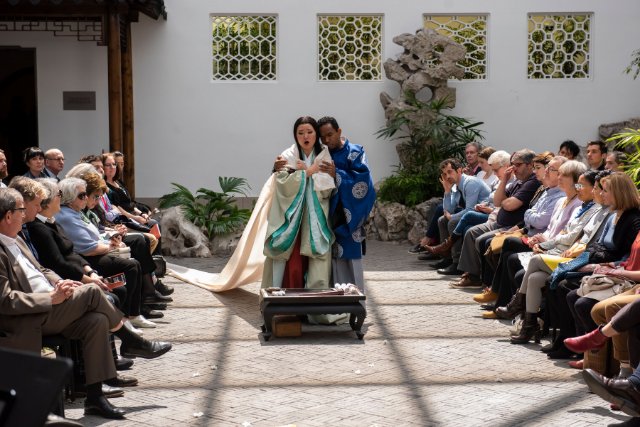 Murasaki's Moon at the Metropolitan Museum Photo by Stephanie Berger

Musical artist Michi Wiancko under the wing of the American Lyric Theater’s development program and backed by Opera America has written a new opera with librettist Deborah Brevoort. The 17th century Astor Chinese Garden Court was the setting of On Site Opera's modern take on the 11th century Tales of Genji. The tales were written by court lady-in-waiting Murasaki Shikibu who lived between 973-1025 C.E. in Japan. She was the daughter of a petty court noble and attended the court’s master of the ceremonies.

The audience for the new opera is rooted in the Asian court, surrounded by ceramic tile flooring and roof tiles, columns of nan wood, gingko latticework and a koi fish pond.  Audience chairs line two sides of the court's center.

Lady Murasaki, sung by the wide-ranging, deep feeling Kristen Choi, writes at her floor level table before us. To the north, the court continues to function. Lady Murasaki’s dream world surrounds her as Genji arrives. Lady Murasaki falls in love with him.Yet he is a Don Juan, carrying with him not a list of names but a bag of fans, each one extracted from a conquest. He is intrigued by this new Scheherazade, scribbling away, or rather painting her words on a continuous scroll. She is not, however, perfect. We know that perfect means that she is a replica of his deceased mother.  He discovers too late that she does not want to be perfect and that he does not care not she is not.

In the meanwhile, we go through their tortured courtship, often filled with the beautiful tenor voice of Martin Bakari as Genji. Like a talented Lothario, he makes you laugh even as he offends. Wrapping and unwrapping themselves in silk, the two position themselves within the court, over which John Noh, a firm tenor playing a Buddist priest, presides.

Wiancko has included a string quartet in her orchestra. She also uses a koto, the thirteen string, six foot long instrument rather like a zither. Taiko drums accompany under the smooth and shapely conducting of Geoffrey MacDonald, the music director of On Site Opera. Eric Einhorn directs for a wonderfully immediate effect.

For all the glamour and exoticism of the oriental surroundings, the work feels very much of now. A woman is struggling to be herself and to create. Michi Wiancko understands this well, because she has learned to do it. She reports saying to her composer husband as she worked on the piece, “Something must be wrong.  This is too easy.”  He said, “Keep going.” The opera feels like her voice, which also makes it texturally natural and engaging.

Wiancko and her husband have a summer festival in the Berkshires.