Hand to God at the Booth on Broadway

Stunning Performances in an Edgy Play 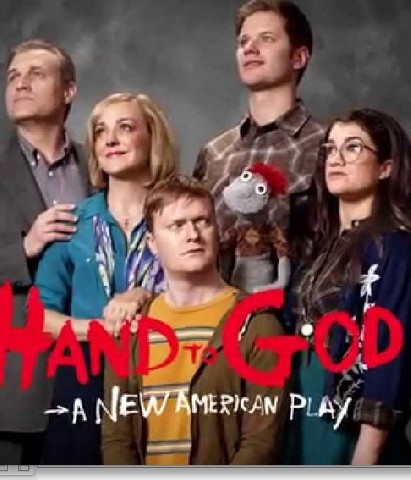 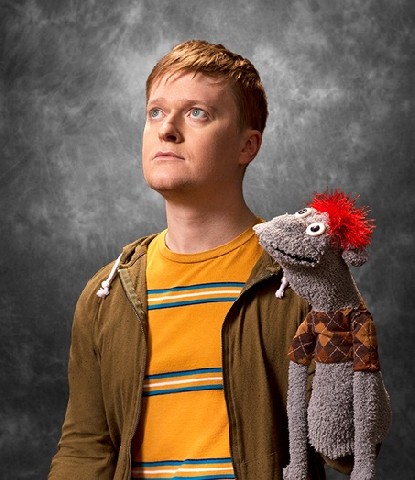 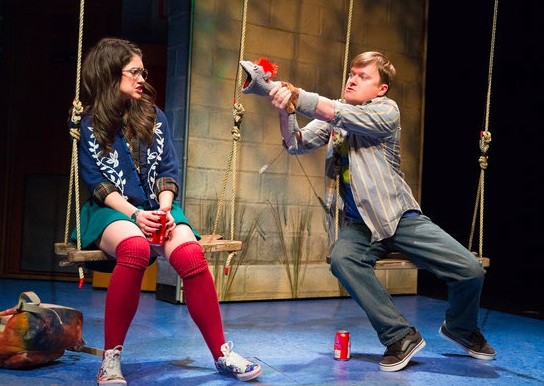 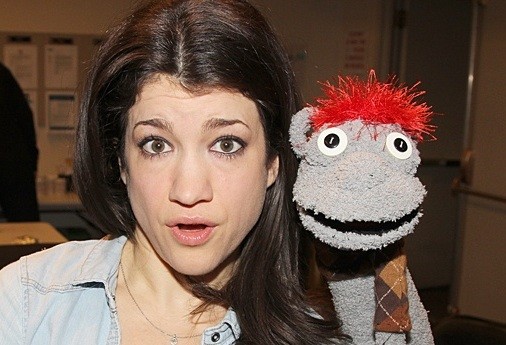 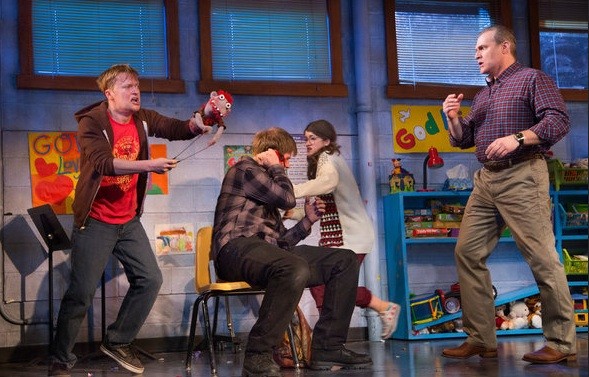 The play is titled Hand to God, but the hand is very much part of Jason, played in a riveting turn by Steven Boyer. He has won both Obie and Lucille Lortel Awards for outstanding actor playing this role off Broadway. He is nominated for a Tony for best actor in a leading role in a play and deserves the nod.

Whoever chose to keep the actor speaking as he manipulated the puppet made a brilliant choice: the actor and hand puppet are often created as two separate characters. In Hand to God they are one, and the common voice and common hand/arm join them.

Sarah Stiles gets a Tony nod too. She is the puppet’s master and carves herself a role as the kindly sex provider, downing the devil by desire.

Mary Kay of Mary Kay Cosmetics grew up in the playwright’s same Texas home town, and the character of Marge could easily be Mary Kay before. Geneva Carr (Tony nomination, best actress) has a face made of putty – the eyebrows, lashes, nose, chin twitching and turning as she turns inside out: a widow in mourning who needs her son but not the advances of the local pastor. She is both penitent and seductress; comforter and dominatrix. Full of surprises, she is at heart a mother in distress. She expresses this by tearing pages of the begats out of the pastor’s Bible, and commanding her young submissor (who turns dominant on a dime).

The two male support roles, Timothy, the sex clod, and the pastor are played as brilliantly by Michael Oberholtzer and Mark Kudisch, but the Tony nominators must have put all the Hand to God actors in a hat and drawn only three.

Kudisch made a thankless role sing, subtly offering a Billy Graham on one side and a remarkably down to earth man of courage on the other. His bow legs made him look like he’d just gotten off a horse. Since a car’s headlights driving for the stage rim blind us at one point (the couple you expect to be necking are mother and son, but in this case, this expectation may have been correct), a horse would have hardly surprised. Instead we get Hello Kitty in Hell. The set design by Beowulf Boritt captured not only Kitty, but Spidey, Crosses and God memorabilia with flare.

To help her recover from her loss, the pastor of the local church suggests that Marge put on a puppet show.   That’s when Tyrone is born, the hand puppet who turns devil and lover too.

Jason wrestles with his hand puppet inhabited by the evil he feels inside himself. Marge wrestles with her demons all over the stage: in a mash up with one of Jason’s friends which ends in Van Goghian drama. There are two other amputations as they play proceeds. Clearly the only way to get rid of parts of the self you (or others) do not want is to cut them off.

Blood spills over the set. Tyrone’s tongue is red, perhaps because he has some of Dracula in his devil.

The cause of Marge’s husband’s death is ambiguous. The play’s final scene, or coda, is unnecessary. But these are minor complaints in a brilliant piece of theatre, which deserves its own nomination as Best Play and for Moritz von Stuelpnagel, Best Direction.

The playwright Robert Askins has an infallible ear (part Texas and part bartender), and a wonderful sense of the complexity of character which he uses to heighten the drama and the viewer’s expectations.