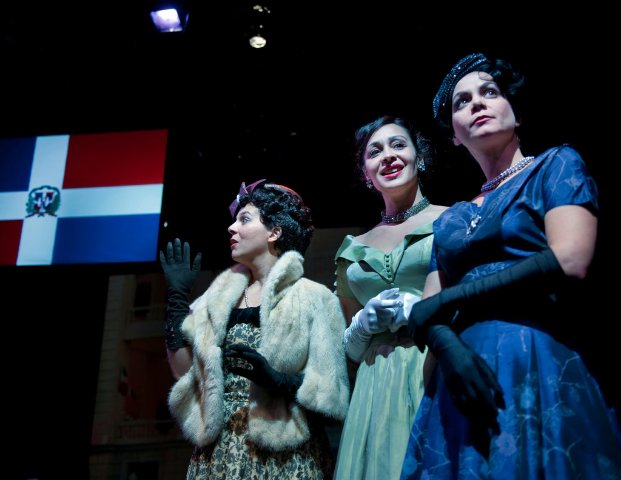 There had been a surge of interest in the Mariposa sisters since Junio Diaz told their story in his Pulitzer Prize winning, The Brief Wondrous Life of Oscar Wao. In a middle-class family, three out of four sisters formed an underground resistance to the Trujillo dictatorship in the Dominican Republic, each in her own way. Minerva studied law and led her group.  She could not sit by and leave her children living in a world created by a tyrant. Gredivel Vasquez is like Carmen, a wonderful mixture of sexiness and determination with an added conviction.

Jose Zayas, in his fifth production for Repertorio, brings out the individuality of each of the sisters, even as he bundles them together in the warmth of a close family. Rosie Berrido as Patria and Diana Pau as Maria Teresa let us in on the terror of Trujillo's time for what seems at first like regular quotidian life.

Unfortunately, Minerva caught General Trujillo's wandering eye. She resists him and lands in jail. Her father is also imprisoned.

Three sisters traveling by cab to visit their imprisoned husbands are ambushed and dragged to a sugar cane field where they are beaten to death.The fourth sister Dede lived in the family home until she died at 88.  We see DeDe, played with moving force by Teresa Perez Frangle, racked by guilt. Her husband would not let her protest and as a result, saved her life. She was left to bring up her sisters' children. Zulema Clares plays a charming Dede as a young girl.

Caridad Svich shaped her drama from a novel by Julia Alvarez, written earlier than Diaz' version of the story. "In 1960, a few months after my family fled the dictatorship of Trujillo in the Dominican Republic, the three Mirabal sisters were brutally murdered. Founders of the underground, las Mariposas (the Butterflies, their code name) had inspired resistance cells throughout the country. (My father had joined one of these cells, which was cracked by the SIM, the secret police, in the summer of 1960 -- the reason we were forced to flee.) This novel tells the Mirabal story through the lens of fiction. Needless to say, this book is one I felt compelled to write."

The play is engaging, but it is also haunting, as we feel the palpable terror of citizens of a country when a tyrant takes over.

The day of the murder of the Mirabal sisters, November 25th, has been declared International Day for the Elimination of Violence against Women by the United Nations.

While Repertorio never feels like a lecture in its lively staging, thoughts linger about the meaning of living under dictatorial rule.