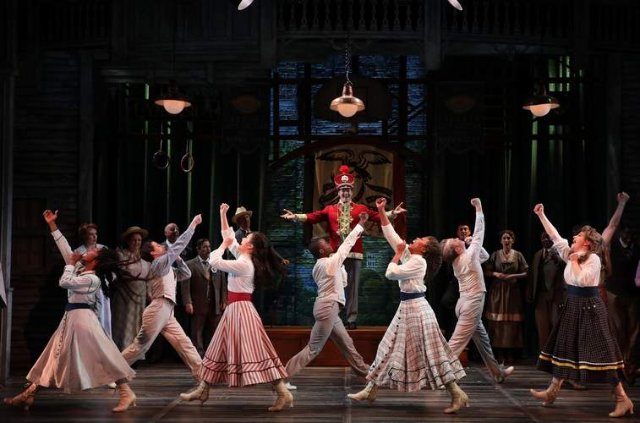 If there is trouble on the Goodspeed stage, i is only the new pool table in River City, Iowa and the very best kind of trouble that exhilarates and enchants. The Music Man, which is opening the Goodspeed season through Thursday, June 20, is a sheer delight.

The credit can be shared among many of the production team led by director Jenn Thompson, but a large part of the credit must go to Edward Watts, who is outstanding as Professor Harold Hill.

It’s amazing that this classic musical by Meredith Willson is having its first production at Goodspeed. It seems perfectly suited to the theater.

In case you have forgotten the plot, it is 1912 in River City, Iowa and a traveling salesman/con artist “Professor” Harold Hill arrives in town. His game? Find something new in the town, in this case a pool table in the billiards parlor, and convince the people that the youth of the town are in deep trouble that can only be saved with a boy’s band. Of course, he is going to sell them the instruments and uniforms and teach the boys to play. The first two are true, but Hill cannot teach them a note; the plan is to get out of town before anyone figures that out.

As in any 1950s musical, we have the teenage couple (he’s from the wrong side of the tracks and she’s the mayor’s daughter) and assorted other folk. The complications include the fact that the Mayor owns the billiards parlor that Hill is attacking.

What sets this show apart is the terrific score by Willson. While this was his first Broadway musical, he was not only a well-known performer (a classically trained flute player) but a musical director of many radio shows from the 1930s and 1940s. He was the composer of scores for many movies and the hit song “May the Lord Bless and Keep You.”

Wilson had a knack for writing interlocking melodie that work perfectly when sung together. He makes good use of this  throughout the show.

Thompson has directed with a sure hand. She makes effective use of aisleS often using them to highlight interlocking melodies. Her staging of the end of the songs “Pick-a Little, Talk-a-Little” and “Goodnight Ladies” is excellent. the women finish the song in the left aisle and the four members of the Board of Education are in the right aisle facing them.

She uses the aisle for the final entrance of the band and  is ably assisted by the choreography by Patricia Wilcox. She incorporates period dance steps into the show.

The set by Paul Tate dePoo III is brilliant. The back wall has a impressionistic look painted on a brick wall. Later the scene at the footbridge is equally attractive. Add to this lighting by Paul Miller and costumes by David Toser. There is  a true sense of a small town in the early 20th century. The costumes are so true to the period, and the hats on the ladies are marvelous.

As usual, sound designer Jay Hilton and musical director Michael O’Flaherty have worked together seamlessly to balance voices and orchestra.

Watts is the standout as Hill. He brings charm, good looks and a terrific voice to the part. He conveys sincerity and self-awareness of his deceptive attitudes with ease. His is a performance that I would be happy to see again.

Ellie Fishman has a fine soprano voice for the role of Marian originated by the great Barbara Cook, but she doesn’t infuse the role with sufficient spunk. This Marian seems a trifle bland. She is overshadowed by the Mayor’s wife, Eulalie Mackecknie Shinn, played beautifully by Stephanie Pope.

Other standouts in the cast are Alexander O’Brien who plays Marian’s younger brother.  He avoids being overly cute, which so often befalls child actors in this part. D.A. Anderson is fine as Mayor Shinn and Juson Williams is very good as Marcellus.

As the teenager lovers, Shawn Alynda Fisher is good as the silly Zaneeta and Raynor Rubel is excellent as Tommy.

At the heart of The Music Man are songs and their staging. From the opening number “Rock Island” better known as “But he doesn’t know the territory” right through to “‘Til There Was You” the music is beautifully presented. The show has too many wonderful songs to mention them all—from “Goodnight, My Someone” to “Seventy-Six Trombones," “Marian the Librarian," “The Wells Fargo Wagon” to the interlocking “Lida Rose’/“Will I Ever Tell You?