Launching the Season with a Message Play 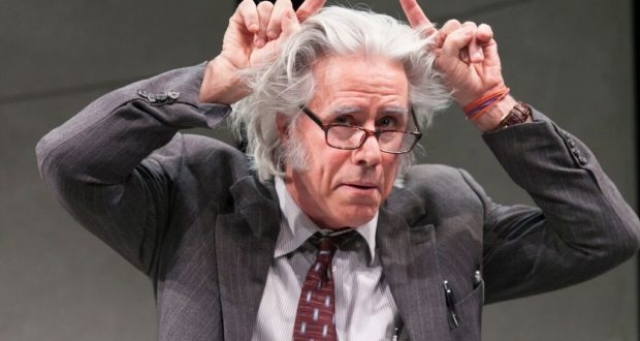 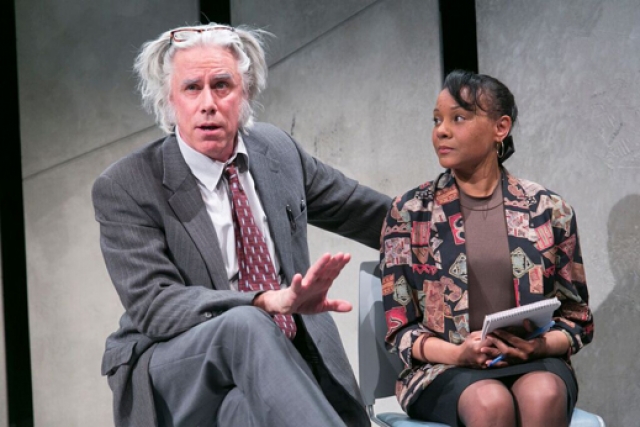 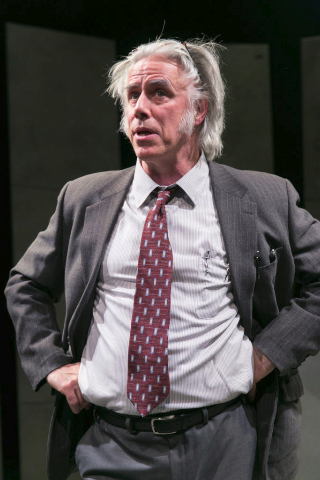 Other than too much hair McCarthy resembled Kunstler. 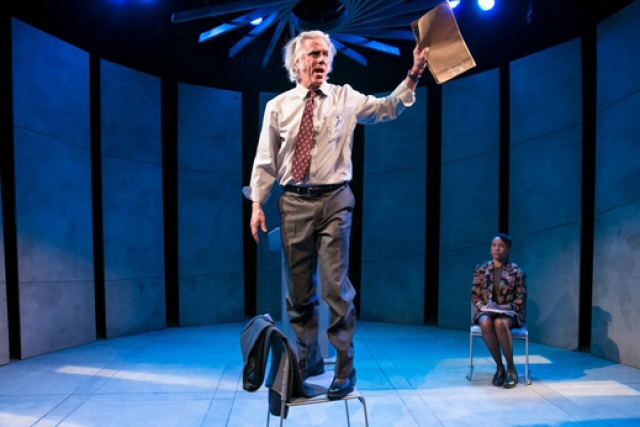 The inept set by James J. Fenton did nothing to enhance the drama.

A lynched effigy hangs over the podium of a littered stage of an awkwardly designed and unexpressive abstracted set by James J. Fenton.

To the muffled sound of protests outside the young black law student Kerry Nicholas (Erin Roche) sets to work picking up the trash. She finds a broom to take down the dummy. She is a reluctant substitute for the student leader of the program committee which has invited the infamous radical protest era lawyer, William Kunstler (1919-1995), to address an assembly of future attorneys.

It is soon established that she has been pressed into the task of introducing a speaker whom she clearly despises. Her reasoning will unfold gradually and gel into a stinging epilogue describing his demise not long after that contentious appearance in 1995. By then we come to agree with much of her contempt. The jury is out, however, for most of the 90 minute play by Jeffrey Sweet that highlights his radical and controversial career.

The actor Jeff McCarthy, who plays Kunstler, has been featured in many leading roles for Barrington Stage Company. They have ranged from musicals to dramas. In all of these appearances he has always been uniquely compelling. Starting with a stunning physical resemblance to Kunstler, and over the top performance, critics have described this as a role of a lifetime.

The actual Kunstler was known for a disheveled appearance, bushy sideburns, and a habit of pushing his glasses up on his forehead. Kunstler was balding with straggley strands in a careless comb over. That's a physical mismatch with McCarthy's massive grey locks.

The play transfers to Pittsfield from a sold out run Off Broadway at 59East59 Theatres. It is anticipated that Kunstler will have similar success in the Berkshires where liberal audiences resemble those in New York.

There are so many flaws in Kunstler that it is challenging to pinpoint them.

I attended a radical university whose students were involved in events presented in this play. Abbie Hoffman, one of the Chicago Seven, whom he defended, was a senior when I was a freshman at Brandeis.

There is the reality check of living through an era and seeing events on stage encapsulated as dark comedy. Like his Yippie clients, Hoffman, Jerry Rubin, and AIM Leaders Russell Means and Dennis Banks, the attorney brought theatre of the absurd to the court room. During the criminal administration of the Nixon White House it brought media attention to show trials in rigged courts. Taking a page from the playbooks of his clients Kunstler wound up in the slammer for contempt of court.

Many of Kunstler's clients had their convictions reversed on appeal.

Like Ken Kesey’s acid tests and merry pranksters Hoffman and his pals used brilliant street theatre to expose the greed and reactionary politics of middle America. They caused a near riot, for example, showering bunches of dollars from the balcony onto the floor of the New York Stock Exchange. There was a comical frenzy as the traders scrambled to grab the bucks. For a few hundred dollars they got back millions in publicity.

In staging Kunstler to launch its season Barrington Stage is evoking activist history in response to the crisis of the Trump administration.

The actual Kunstler, however, is a study in contradictions. Initially, he practiced law in the pursuit of an upscale Westchester lifestyle with a wife and two daughters. That changed when he was retained by the A.C.L.U. to defend the Freedom Riders attempting to integrate lunch counters in the segregated South.

Abandoning his family, resulting in an eventual divorce, he was in the thick of some of the most important criminal trials of his generation. Primarily, he was celebrated/vilified for representing leftist causes but he also later defended rapists, terrorists and the mafia.

The script has Mc Carthy state that “I have been accused of being a showman. To which I plead guilty — with an explanation: If I have the ability to attract attention, it means I can draw attention to my client’s causes. Sometimes I purposefully leverage my — notoriety? — to give these people the public consideration they deserve.”

Regarding theatre of the absurd Kunstler was more a provocative, disruptive lawyer than artist. Compared to the brilliant inventions of his clients he was a wannabe standup comic. That is evoked by self deprecating lawyer jokes.

Between the lines one senses that Sweet’s take on Kunstler was that of an egocentric, clownish square. Invited to tag along at Woodstock by his pals Abbie and Jerry the lawyer has nothing good to say about three days of love, peace and happiness. Good grief! He pans The Who and Hendrix. McCarthy has an awkward moment conveying his preference for Cole Porter and Jerome Kern. Breaking briefly into song we catch a hint of his musical chops.

Famously, Pete Townshend of The Who used his guitar to knock Abbie off the stage when he attempted to politicize Woodstock.

The character of Nicholas is crafted as a foil to counter the towering ego and misdirection of Kunstler. He sees himself as an angel compared to an infamous classmate at Columbia, the smarmy Roy Cohn,  cast as a devil.  To emphasize his point he evokes devil's horns with his fingers. The dichotomy made me long for a play about Cohn who was a key character in Tony Kushner’s far more interesting epic Angels in America.

We were surprised to learn that, as a favor to Cohn, Kunstler drafted a will for his infamous boss Senator Joseph McCarthy who was indeed evil incarnate. As they say "Why don't sharks bite lawyers?...Professional courtesy."

Who to blame for the ineffectual character/ performance of Roche? Is it poor casting or bad writing? She is on stage for the length of the one act play. Her resentment is established at the beginning and functions as passive resistance to his self indulgent CV of “greatest legal hits.”

Mostly she sits and squirms. Like her we wince at his caricatures of race. Every time blacks are mentioned he glances at her hoping to evoke a response. We are shocked when he launches into an ersatz Indian war dance when discussing AIM's Means and Banks. Good grief! Why on earth did the director Megan Fay have him do that?

She has him moving all over the set as well as up and down the aisles. This frenetic energy is a simulacrum of the character’s inherent charisma. This disrupts and undermines the intended counterpoint between Kunstler and Nicholas. That synergy just never happens. While he is supercharged with self propelled passion she is understated to the point of being bland and boring. Set in 1995, a generation after the peak of his career, she represents young, gifted and black women who have traded street fighting for law school.

Reflecting the protesters outside, with no street smarts or life experience, she lashes out at him for defending deplorables. How on earth could the renowned civil rights attorney represent and hug murderer and mobster John Gotti?

By then I had pretty much given up on this stridently polemical play. Nowadays, for dark comedy and theatre of the absurd, I prefer CNN and SNL.