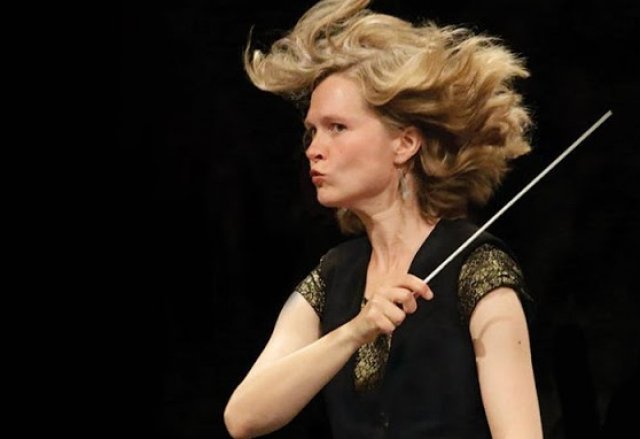 The MET Orchestra at Carnegie
This has been a season that the Metropolitan Opera would rather forget: one where scandal, not music-making, has put the opera company in the public eye. So it was with some feeling of relief that the MET Orchestra, as the company's players are billed when giving symphony concerts at Carnegie Hall, reported to the stage of that august venue for Friday night's performance. This was the first of three performances, over the next few weeks: the last concerts of the Hall's current season.

Friday's performance featured the debut of Mirga Gražinyte-Tyla, the Lithuanian conducting sensation who in 2016 at 29 years of age became the first woman to stand at the helm of the City of Birmingham Symphony Orchestra. However, this concert saw the young conductor steering the MET Orchestra through some rough and choppy waters.
The program was solid and conservative: a tone-painting by Debussy, songs by Mussorgsky and a muscular Tchaikovsky symphony (the Fourth.) However, the performance was fraught with issues.The problems started in the Debussy Prélude à l'après-midi d'un faune, a piece that breathes the atmosphere of a hot, languid afternoon in some mythical forest. The flute solo started the work but the first entry of the brass was awkward. Conductor and orchestra settled into the gossamer phrases and slow-breathing rhythm of the piece, but the tempos sounded wayward, as if the players and Gražinyte-Tyla were still taking each other's measure. Next up were the four Songs and Dances of Death by Modest Mussorgsky, heard here in large-scale orchestrations by Dmitri Shostakovich. These songs date from the 1870s and are among Mussorgsky's more concise and complete musical statements. They are based on poems by  Arseny Golenishchev-Kutuzov. Each features the Grim Reaper as a central figure. In 1962, they were given a turbo-charged orchestration by Shostakovich, who continued along Mussorgsky's line of musical thought in his own Symphony No. 14.

The soloist for these songs was Anita Rachvelishvili, the Georgian mezzo-soprano  who sang Azucena in Trovatore this year at the Met. However, Rachvelishvili delivered the Russian text with more emphasis on the vowel sounds and notes than the consonants in between, rendering the meaning and power of these words moot. Ms. Gražinyte-Tyla kept a tight rein on the orchestra in the opening Lullabye, and let the strings lament along with the singer in the following Serenade.

The dim lighting of Carnegie Hall, the small, printed programs and the blurred consonants of Ms. Rachvelishvili's singing did much to undermine the power of these songs by rendering them difficult to understand. The Trepak exploded with bold and vigorous energy. The Field Marshal had swagger and military stomp, but again the overall effect of works did not accumulate enough weight to drive their message home to the listeners. Besides, they were all there to hear Tchaikovsky.

That symphony took up the second half of the evening. The opening had a certain brutal charm, with the blaring brass answered by muttering strings before the whole theme coalesced.  Gražinyte-Tyla showed that the core of her talent lies in the orchestral transitions, pulling big rising stairways of chords from her players that seek to elevate the listener to a profound state. However, that state of bliss did not emerge in these four movements, and the big brassy repetitions of the finale came off as repetitive and strident. It was only in the encore: Dream by 1921 Lithuanian composer Juozas Naujalis, where the pairing paid off, producing an enchanted state in the audience that was met with rapturous applause.

(Reprinted with permission from Superconductor.)
Back to Front Page Section Home