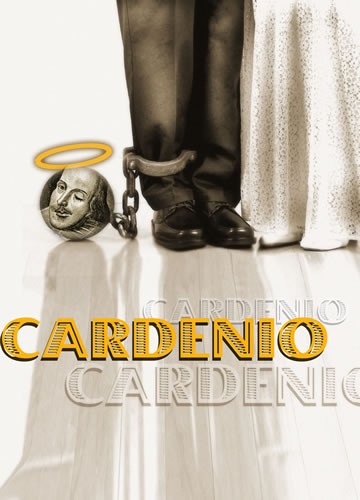 Cardenio is Produced in association with The Public Theatre, New York

It is always exciting that the American Repertory Theatre takes artistic chances. Often the shows produced and performed by the company are edgy, quirky and highly provocative. The premise of a production is most often presented in an original way. So it is disappointing that the world premiere of Cardenio demonstrates so little of any of the things that make A.R.T. such a special theatrical institution.

The origins of Cardenio are found in a rather murky lost play, known to have been performed twice by the King's Men, a London theatre company, in 1613. The play then literally vanished. It was attributed by a dubious source to William Shakespeare and his occasional collaborator John Fletcher, in 1653, in a Stationers' Registry entry by the bookseller Humphrey Moseley. He was known to have falsely used Shakespeare's name in other entries and even in another part of the very same entry.

Though the content of the original play is not known, if it actually existed, it is likely to be based on exploits involving the character Cardenio in the novel Don Quixote. The 1612 translation by Thomas Shelton would have been available to the authors. It is thought that the playwright John Fletcher based several of his later plays on the work of Miguel de Cervantes. Adding to this notion the flavor and spirit of Shakespeare's comedies, this is what playwright Professor Stephen Greenblatt, the eminent Harvard Shakespearean, and the playwright Charles Mee used as a starting point to create Cardenio.

Following the dubious history of Cardenio, in 1728, a fellow named Lewis Theobald then produced a play he called "Double Falsehood." He claimed it was based on the original manuscript of "Cardenio." But Theobald never brought forth a manuscript. He claimed instead to having stored it in a Covent Garden library that later burned to the ground. Therefore, Cardenio has remained nothing more than a title and the hint of a plot supposedly drawn from an episode in Cervantes's Don Quixote. Greenblatt and Mee had hoped to theatrically magnify it. Unfortunately, even though their intentions were probably on the highest level -to attempt to reinterpret Shakespeare in a 21 Century context-the resulting production, script, character development, and even storyline just fall flat.

A Midsummer Night's Dream's lite this is not. This Cardenio is wordy without saying very much. Far from poetic, the language is some strange attempt at a failed modernized Shakespearean tongue. The phrasing is often strained, awkward, and needlessly dense. The speeches do not enlighten but seem to anesthetize the audience especially in the overly long first act. The characters are just not fictionally acceptable. Most of the time, it is unclear who or what the characters are, There is a lack of genuiness to all of them. Are they suppose to be symbolic? Symbolic of what? They are characterizations even caricatures rather than characters. And there are a lot of them. Several of these individuals have fits of angry monologues. Too many of these tirades lessen and confuse the narrative even more.

The major premise of the play is the test of fidelity or infidelity. Is this suppose to be about pure romantic love? Or is it about the human ability to make mistakes regarding love? Who knows? Do we even care? The odd way that the narrative  is written makes us not want to know more but to just get through it.  The playwrights seem to be ambitious without developing core ingredients. They want to speak to our self-indulgent, materialistic contemporary lifestyle, but they create no fully wrought characters to express this. The characters are one or, at best, two-dimensional. There are just a series of types: a paranoid husband, a pair of pathetic theatrical over-bearing parents, a shrew/bitch sister, the beautiful former girlfriend, etc.

Even the set is a bit strange. It is the rear of  an Umbrian country house  that appears too freshly painted rather than covered with a rustic, aged patina. However, the stone farmhouse set is perhaps the best realized character in the play.

Weirdly, why does this Umbrian wedding celebration become a full costume walk-through of a play? Perhaps, this is based upon the obscure early 18th Century Theobald play, Double Falsehood. But, this academic inside joke is just too inside. There appears to be a Judy Garland/Mickey Rooney let's put on a show in our backyard quality to the production. All of a sudden, craftspeople appear to build a stage, elegant costumes materialize and individuals seem to learn their lines in an extraordinarily short amount of time. Judy and Mickey were fun, while Cardenio just becomes tedious. Did I mention that the show took almost three hours?

What did I really think of the play? Well, the actors even straight-jacketed by strange characterizations and even odder lines, often performed with energy and sometimes exhibited great talent and humor. Two songs are performed beautifully by Rebecca Luttio, as Simonetta, and Leenya Rideout, as Susana. But, the musical pieces are more interlude  than action. Remo Airaldi performs a very funny one-man show bit as Rudi in bearded drag. But even this is is comic relief rather than moving along the narrative.

The set by Annie Smart is well done. The Elizabethan costumes by Christal Weatherly are elegant and quite beautiful. All things considered, Les Waters' direction seemed fine and rather expertly coreographed. As always, the production values of the A.R.T. are at the highest level. It is too bad that the play wasn't better. Cardenio is supposed to be about deriving love from chaos. There was just too much chaos. Perhaps, Professor Greenblatt should stick to his day job.