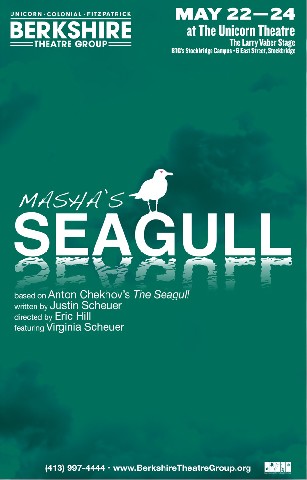 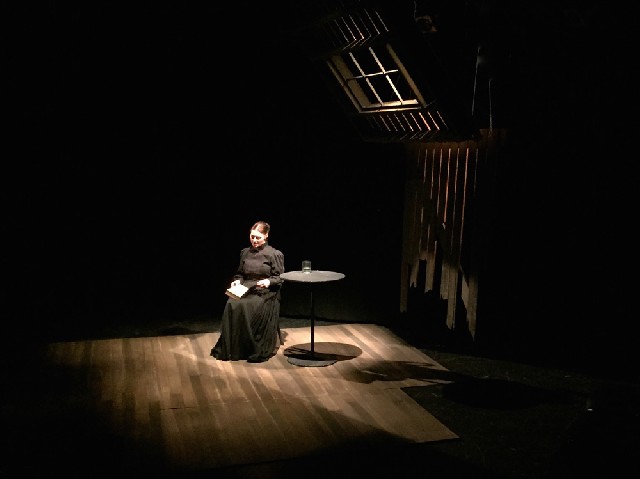 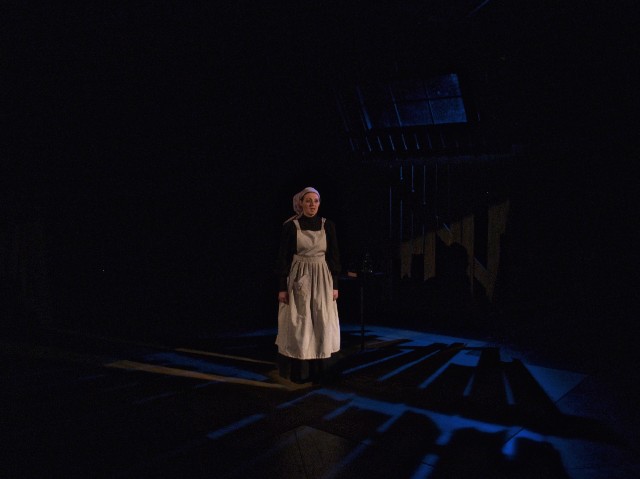 Early on in her hour and twenty minute monologue Virginia Scheuer informs us that the minor character in Chekhov's masterpiece, stretched out as "Masha's Seagull," wears drab black because she is mourning her life.

It is indeed a stark and somber evening brilliantly designed with minimalist restraint by Nathan W. Scheuer. With barest set and props Masha reveals her intimate thoughts and insights to crime while in jail awaiting to be sent to grim Siberia to serve an eight year sentence for the murder of her husband.

Chekhov did not give many lines to the daughter of Ilya Afanasyevich Shamrayev, a retired lieutenant and the manager of Pjotr Nikolayevich Sorin's estate, and her mother Polina Andryevna,

It was intended to be a murder/ suicide by drinking arsenic in the tea. She is distracted by the torn up manuscripts of her beloved Konstantin Gavrilovich Treplyov strewn on the floor. Drawn to compelling fragments her tea is by then cold.

When Konstantin falls in love with the coquette and ingénue Nina in despair Masha married and had a child by the dull teacher Semyon Semyonovich Medvedenko.

The marriage of convenience has evolved to deadly contempt. To convey her resentment of a loveless marriage she quotes Tolstoy's Anna Karenina who came to despise the anatomical detail of her husband's ears.

This stunning, richly nuanced performance by Scheuer proves to be a family affair. This variation of Chekhov fleshing out an intriguing minor character was written by her husband, Justin Scheuer, with the lighting and design of their son Nathan.

The production was directed by Eric Hill in Bentonville, Arkansas who brought it back to the Berkshires. Based on the intensive quality of the production it is having a too short run at the Unicorn Theatre. In Bentonville the Scheuers teach in the public schools and operate The Classical Edge Theatre where this work premiered last fall.

Although it opened on Memorial Day Weekend it was so unseasonably cold last night that it felt like the winter from hell that just won't quit.

The chilly night seemed perfect for the mood of sangfroid with which the cold hearted and vengeful Masha reveals her tale of jealousy, resentment and murder.

Without intimate knowledge of the classic Chekhov play one would be hopelessly lost in following the complex details and references of this tautly constructed, wordy play. Even knowing what she references demands close attention to the twists and turns.

This dense drama is well paced by Hill and Scheuer as she creates a feeling of distinct scenes and mood shifts in the narrative by having her first seated and then moving about the sparse set. There is use of a glass of water to accent plot points. She walks briefly off stage returning with a gift, a bottle of vodka. This evokes her coarser side.

In Czarist Russia on the cusp of revolution she is a bland non entity. In a few short years she would be a comrade and citizen. But during the last phase of absolute monarchy she is a nobody however invested by Chekhov with tantalizing depth that is only hinted at. This intriguing work fleshes her out.

His work at that time was revolutionary in presenting realism in theatre. Instead of the great sweeping speeches and gestures of the melodramas of the period his characters muse in internalized sub plots and back stories, the psychological undercurrent of the drama.

Today Chekhov and his four most commonly produced works are regarded as enduring classics that mark the beginning of modern theatre. In the world of theatre they are so enmeshed that they inspire variations of Chekhov like the wildly popular, Tony winning "Vanya and Sonia and Masha and Spike" by Christopher Durang.

There were occasional laughs but I don't regard the Scheuer family project as a comedy.

Rather, it is a complex deconstruction of that iconic play as seen by a minor character offering her take on those familiar and fascinating players.

We enjoyed an evening in the tradition of "Rosencrantz and Guildenstern Are Dead" by Tom Stoppard.

Much in the spirit of post modernism this is theater for hungry audiences that just can't get enough of Chekhov and Shakespeare.