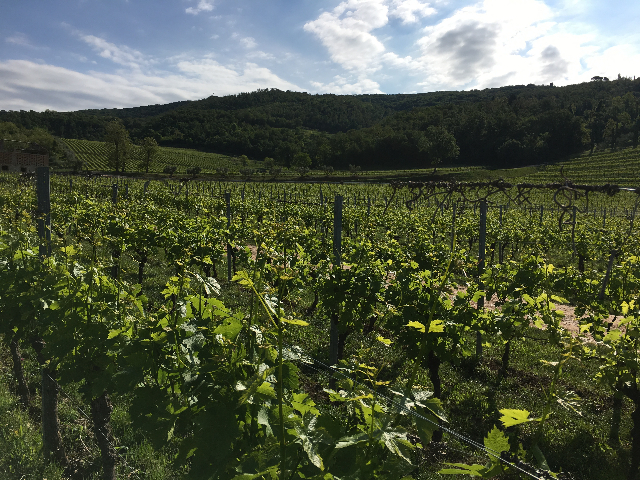 In January, while in Verona, I attended a wine dinner and sat next to Andrea Lonardi, a young workaholic that travels the globe for Bertani- a winery from Veneto which is one of the most influential producers in the region. I sampled two amazing wines of the Bertani collection and was overcome by their quality and authenticity. I wanted more, hence a return to Verona four months later to sample their portfolio of wines-Amarone is my favorite-and to visit the vineyards and production area to get a better grasp on what Bertani is.

Founded in 1857, the dream of the brothers, Gaetano and Giovan Battista, was to purchase the best land in the region and produce the best wine possible. Their philosophy of owning vineyards and bottling their wine was a way to gain independence in an industry that often leased land and paid for bottling.

Gaetano was a gifted winemaker, having studied winemaking in France under Guyot, who was considered a leading expert in viticulture  both during his time and today. (Isn’t there a pruning method named after Guyot?)

The vision 160 years ago is still alive, same idea, but, with some different players. Cantine Bertani was bought by Tenimenti Angelini in 2011, also a family-owned wine producer, based in Tuscany.  Angelini kept the management team in place and are running the operations separately.

Bertani has created an iconic image in the industry. The Bertani labels have been the same since 1958, mesmerizing consumers with its hypnotic label. Consistency, transparency (say what you do) and commitment to quality paired with terroir recognition has made the name, Bertani, stand out from the crowd.

At 8am sharp, I was picked up in Verona by Stefano Mangiarotti, who just returned from living in New York for seven years. Helping Bertani’s operations in North America I was his link to America. We drove for half an hour, ending up at the headquarters of Bertani- a large historical facility where wine was produced and stored. It is the home of  administrative staff.

After a quick coffee, Stefano showed me the facility in Grezzana, the heart of the operation. We visited the enormous wine cellar, the bottling plant and the lofts where the grapes are dried on straw mats. ‘Originally, silk merchants used the lofts prior to the instillation of the drying mats’, Stefano said.

Immaculate and clean, the headquarters had a sophisticated look that was sleek and futuristic like the image of Bertani.

It was a relatively short drive from headquarters to the closest vineyard, located on an old estate, with a panoramic view of the hills of the Veneto. ‘This is where our varietals live’ said Mangiarotti.

The land was hilly, terraced and vast, as far as the eye could see.

Stefano pointed out that in the future, the caves in the mountain will be turned into wine cellars. This is a unique approachlike many others Bertani takes.

Stefano said that the traditional grapes for the Valpolicella collection are grown on this hill. He emphasized the grape make-up for the classics.

My afternoon was spent with winemaker Giordano Formenti, a young, energetic winemaker who carried the weight of Bertani’s iconic portfolio.

After a walk around the loading dock, where I spotted a shipment to Palm Bay, their US distributor, we visited the wine cellar and  impressive production area.

He brought me to where he makes wine, then upstairs to a large tasting room where we sampled  nine wines.

Three months after attending a wine dinner with Andrea Lonardi, my fantasy of visiting Bertani came true. The wines I tasted in Verona in January came alive at the headquarters of Bertani at Via Asiago 1, Grezzana, thanks to some persistence of mine and the help of Michela Bonomi for arranging my daytime visit, Stefano Mangiarotti for showing me the vineyard and picking me up, as well as a wonderful wine tasting and wine lunch with winemaker extraordinaire, Giordano Formenti. A special thanks  to Paola Baschirotto.

Tradition and style-repeated over and over make Bertani the winery it is today. Repeating , repeating, repeating style turns wine into classics. The same consistency in your palate has been recognized at Bertani. This philosophy of making wine as consistent as in the priot vintage is their trademark.

It’s a good lesson for all of us.