The My Way Residential 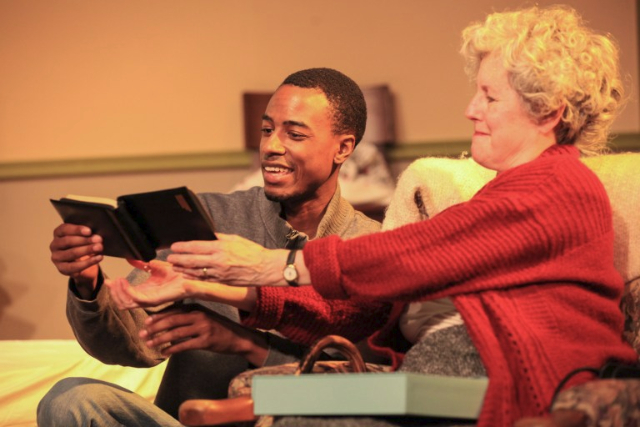 Families are created in many ways and it’s only recently that we recognize the value and beauty of the variety of families in our midst. The My Way Residential, a world premiere play by Geraldine Aron at Irish Theatre, brings this message home with humor, charm and a poignant touch of South African history. Under Kevin Theis’ direction, the performances sparkle and the scenes move along briskly.

Willa (Belinda Bremner) is an elderly woman from Galway, moved into a senior living center in London against her will by her busy and distracted daughter, Catherine (Carolyn Kruse). Catherine is busy with her decoupage and an extramarital affair.

Willa emphatically does not want to be at the My Way Residential and lets everyone know this. She refuses to abide by the house rules (residents must stay in the lounge during the day and socialize with others) and stubbornly sits in her chair.

The home director, Sister Chang (Christine Bunuan) has Nurse Ratched as a role model. She commands Byron, the orderly, to strap Willa into a wheel chair and wheel her off to the lounge. Later she removes the antenna from Willa’s TV set.

The orderly is Byron (Terry Bell), an illegal émigré from South Africa, who cleans the room, changes bedding and sees to the residents’ needs. He confides to Willa about some of Sister Chang’s practices (“don’t ever eat the cupcake she brings you”) and how the My Way really works. Byron and Willa become friends. Actually, the transition from Byron as obedient employee to Byron as confidante and friend is a bit abrupt. The 80-minute play could add another scene or two to develop that relationship change.

Byron (he calls Willa “Mama” as is the custom of his Xhosa village) begins to tell Willa stories of his life growing up in South Africa and how he came to lose his family. (He and his siblings were all named for English authors: Byron, Bronte, Eliot and Tennyson.) To entertain Willa on her birthday, he performs a “gumboot dance,” an exuberant dance with boot-slapping sound effects. Willa applauds him generously and he tells her more of his family story. As the scene ends, she comforts his bereavement.

The ending is too delicious to even hint at here, but it will make you smile.

Bell is magnetic as the illegal immigrant who can finally open up and tell his real story to Mama Willa. His South African accent never slips nor do the accents of any of the other actors, thanks to the work of dialog coach Kathy Logelin. Bremner also is excellent as the determined Willa. Merje Veski’s set design, enhanced by Smooch Medina’s lighting, enables scenes to slip smoothly from Willa’s room at the My Way to Catherine’s kitchen and other settings.

Geraldine Aron was born in Galway and lived for 20 years in South Africa and other African countries; she now lives in London. She dedicated this play to Pumla Lolwana and her children Lindani, Andile and Sesanda, whose tragic story inspired Byron’s story. The Irish Theatre of Chicago staged Aron’s hit play, My Brilliant Divorce, in 2015.

The My Way Residential continues at Irish Theatre through June 25. See it on stage at the Den Theatre’s second floor mainstage, 1337 N. Milwaukee. Tickets are $26-30 for performances Thursday-Sunday. The Den Theatre now has valet parking for $12.