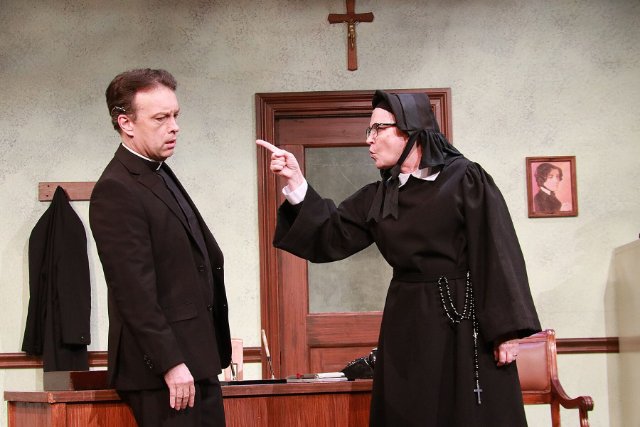 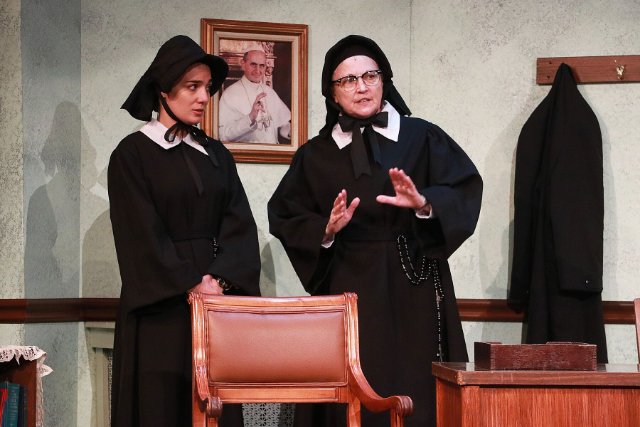 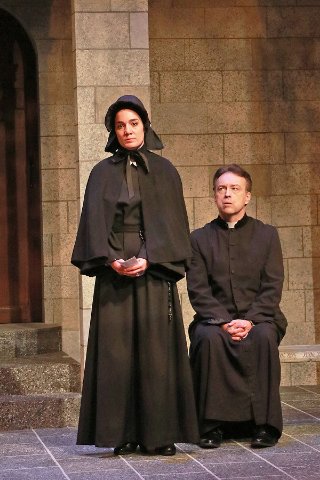 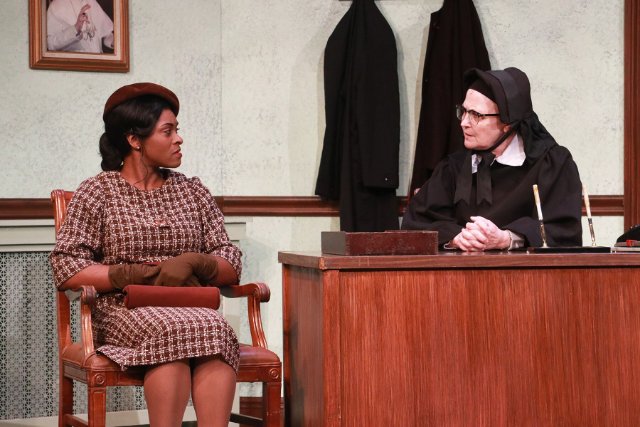 The 2005 Pulitzer Prize-and Tony Award-winning play is running through June 9. And we can say, without question, that this production features some of the most intense, yet convincing acting you’re likely to witness in a theater.

Surely, the heat and intensity emanating from the stage, courtesy of first-rate performances all-around, will leave you breathless and applauding widely.

Actually, the immensely talented four performers, comprising some of South Florida’s finest stage talent, don’t really “act” or “perform.” Rather, they become the characters inhabiting playwright Shanley’s very grey world in which certainty collides with doubt. This head-on collision at full force occurs in a Bronx Catholic school and parish in 1964.

A question of guilt or innocence swirls around Father Flynn. He is the parish priest and gym/religion instructor. Specifically, the school’s cold-hearted, old-fashioned principal, Sister Aloysius, feels certain that the kindly, reform-minded priest engaged in an inappropriate relationship with a student.

However, Shanley clearly isn’t interested in sensationalism or focusing on scandal. Instead, in his tight and riveting, timely, tough yet tender 90-minute play (without intermission), the writer, with impressive subtlety, presents a cautionary, yet non-preachy tale with high-octane drama. In particular, with laser focus, Shanley warns us about the dangers of black and white thinking and absolute, unchecked certainty.

The playwright’s writing is snappy, concise and empathetic. And he refuses to take sides in the high-stakes battle between Sister Aloysius and Father Flynn. But if you’re looking for anything neat or clear-cut, you’ve come to the wrong play. Indeed, Shanley forces us to confront the reality that we must all learn to live with uncertainty in a complicated world with no guarantees.

But at the same time, the playwright suggests we consider the notion of doubt through an entirely different lens. Doubt can be a good thing. In particular, it can bring us closer together through a shared experience. As Father Flynn says during one of his sermons,  "Doubt can be a bond as powerful and sustaining as certainty."

Certainly, the decade in which Shanley set Doubt was one of change and tumult. America was in the midst of the Vietnam War. Also, the year in which the play takes place is the same one in which President Johnson signed the Civil Rights Act of 1964. Meanwhile, Sister Aloysius has just accepted the school’s first-ever black student. And he is the youngster whom Father Flynn allegedly targeted.

That fact alone is enough to pack a play with pyrotechnics. Add to that Sister Aloysisus’ unyielding, strong-willed personality and the friendly, but easily flustered Flynn, and you better call in an explosives team.

Doubt: A Parable possesses the attention-grabbing and holding power of a suspenseful page turner. Although Shanley penned his play 55 years ago, one cannot question its relevance to today’s polarized society. Folks are intolerant (and intolerance is a theme that Shanley explores in Doubt). Also, in 2019, people are calling each other names, maiming and even killing each other. At the same time, arrogant, self-assured politicians shout over each other, with no room for rational debate or shades of gray. We live amid a black or white, you’re with me or against me environment.

In fact, it’s probably hard to keep track of how many times we’ve heard the phrase “witch hunt,” with the Mueller investigation dominating headlines (and the priest child abuse scandal still fresh in our minds).

However, other than that, Arisco has wisely left Shanley’s great drama intact. He obviously trusts the play’s remarkable dramatic power to grab and hold an audience’s attention — perhaps even those of us with attention deficit issues.

Speaking of issues, themes and ideas, this play possesses its share, despite its short length. The playwright examines ideas of compassion, innocence, tolerance, education methods, change vs. the status quo, and, of course, certainty as well as doubt.

Sure, this play is a serious, often dark, meaty and suspenseful piece. However, it is also funny at times.

Even so, the playwright obviously hasn’t inserted humor merely for comic relief purposes.

Rather, the lighter material reinforces the play’s themes.

For instance, we realize early on that Sister Aloysius isn’t exactly a sweet person.

And so, the school’s principal is a bit perturbed when the often-sweet Father Flynn requests sugar with his tea. The scene takes place during a meeting between Flynn, Sister Aloysius and Sister James. The latter is a young, naïve, enthusiastic teacher who adores educating youngsters.

Sister Aloysius (appalled but trying to hide it): Three.

Sister Aloysius (while dispensing the sugar cubes into the cup): One, two, three. Sister, do you take sugar?

As Sanford embodies her, Sister James is sometimes bubbly and naïve, yet clearly scared of the principal. In the older woman’s presence, Sanford’s moist eyes suggest wariness and fright. Also, Sanford’s voice possesses a shaky quality.

The performer’s impressively convincing performance might bring to mind one of the wary, frightened girls from Arthur Miller’s The Crucible. In fact, it’s not a stretch to believe that Sister James feels her boss is essentially a witch.

Even so, credit Arisco with apparently directing Laura Turnbull not to turn Sister Aloysius into a monster. To be sure, Turnbull portrays the nun as a cold, commanding, unfeeling and self-assured woman. Still, hidden beneath this tough, unsentimental exterior, we sense a hint of humanity. That is necessary, because it makes the surprising ending seem credible.

Certainly, Terry Hardcastle brings credibility to his role as Father Flynn. The actor speaks his lines with impressive nuance. Further, he alternates seamlessly between an easy-going, charming demeanor as well as intense anger and nervous energy.

Toward the end, Hardcastle is especially strong. In a natural, seemingly unforced manner, his body shakes with fear, anger and emotional pain. He looks as though he’s about to fall apart under the weight of Sister Aloysius’ relentless, dogged determination to bring him down.

But, as Sister Aloysius is fond to say, make no mistake: Hardcastle’s Flynn often stands up to the principal. He matches her intensity and refuses to allow her to belittle him.

One can say the same for Rita Joe’s Mrs. Miller.

In a smaller, yet pivotal role, Joe is like a pitbull in her character’s fierce protection of her son. She’s not about to let Sister Aloysius’ “crusade” against Father Flynn prevent the boy from graduating on time.

Also, Joe imbues Mrs. Miller with strength, grace, guardedness and suspicion. And who could blame her? After all, her son, Donald, is the first black child to attend St. Nicholas, in the wake of the Civil Rights Act’s birth.

Surely, to Donald, who never appears in the piece, the church and school’s physical structures must seem imposing and threatening.

Speaking of the setting, the aforementioned adjectives accurately describe set designer Gene Seyffer’s rendering of the parish and school. With tall, majestic columns, arches and walls, the set seems built just the way Sister Aloysius might like it. Sure, the set might make the parish seem stately, but also cold, uninviting and old-fashioned. In addition, the structures’ height makes it seem like this institution is closed off from the outside world. And the dominant grey color reinforces this aura.

But Seyffer’s color choice can also support the notion that there’s a whole lot of grey in the world – nothing is simply black or white. As a matter of fact, the tension between these symbolic colors is  present in the sisters’ outfits, designed by Ellis Tillman.

The multi-award-winning, highly-respected Actors’ Playhouse has earned a reputation mostly for its strong productions of musicals.

But with its production of Doubt: A Parable, it’s clear Arisco and Co. are equally adept at mounting straight plays.

Doubt: A Parable runs through June 9 at Actors’ Playhouse at the Miracle Theatre, 280 Miracle Mile in Coral Gables. Performances start at 8 p.m. Wednesday through Saturday and 3 p.m. Sunday. Tickets prices range from $30 to $75. The theater offers 10 percent off all weekday performances for seniors and $15 student rush tickets to any performance 15 minutes before curtain with identification. Discounts are subject to availability. For tickets, call (305) 444-9293 or visit www.actorsplayhouse.org.