I Am My Own Wife at Barrington Stage Company 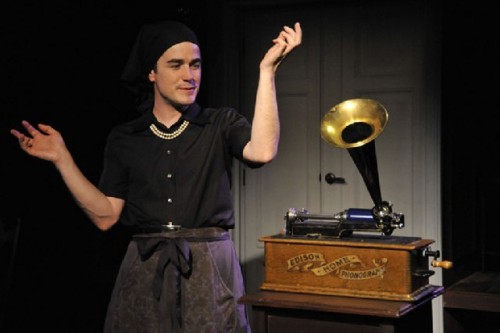 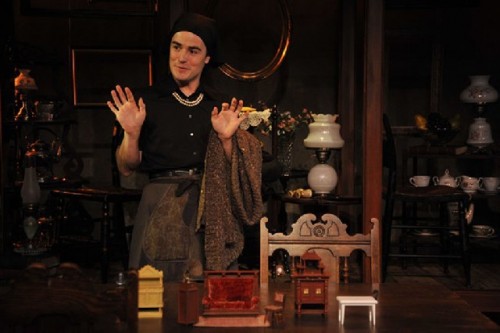 Charlotte discusses the objects in her Das Grunderzeit Museum. 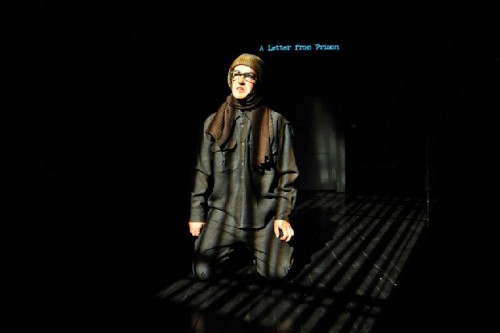 In a harrowing scene she portrays her lover/collaborator, Alfred Kirschner,in prison. 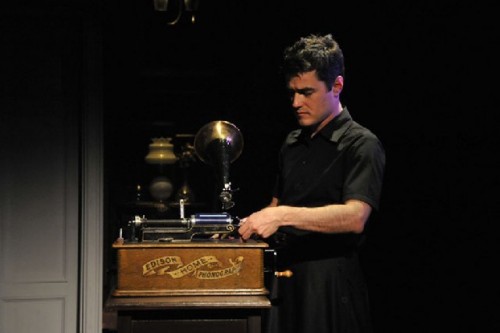 Gatton steps out of character to convey the final moments and legacy of Charlotte.

Before the curtain rises on Barrington Stage Company productions, its Artistic Director, Julianne Boyd, greets the audience and provides updates on special events and offers such as the Pay What You Want nights for ages 35 and under. The intention is to expand the audience beyond the mostly seniors who attended the season opening of I Am My Own Wife. She welcomed the audience to the intimate new Stage Two which had been under construction in the V. F.W. center, since April. Boyd told me that they have a five year lease as tenants in this smaller theatre which will run concurrently with the Main Stage productions. This just enriches the menu and diversity of offerings of an outstanding regional theatre company.

During an opening at Mass MoCA, on Saturday, we learned from Stuart Chase, the director of the Berkshire Museum in Pittsfield, that they have finished a $10 million renovation. The magnificent Colonial Theatre has been renovated and this is the second season of Barrington Stage in its new permanent home in Pittsfield. It is also the second full season for the outstanding Ferrin Gallery which has relocated from Lenox. The Storefront Artists Project, which played a huge role in getting the arts rolling in downtrodden Pittsfield, continues to thrive and expand its ambitious programming. A multi screen art house is under development. While the ambitious Spice restaurant has closed it appears that another well established Berkshire restaurant will open in the now vacant space. All together there are compelling signifiers that once down on its heels Pittsfield is revitalized as the matrix for the arts in the Berkshires.

The intimate new Stage Two has been launched with an absolutely riveting production of the 2004 Tony and Pulitzer award winning drama starring the truly amazing Vince Gatton as the complex and nuanced Charlotte von Mahlsdorf. She was a German transvestite and antiques collector, who survived and outwitted both the Nazis and the Stasi of East Germany.

Having seen the original Broadway production starring Jefferson Mays, who won the Tony Award as best actor for the one man play, I knew what to expect. But I was truly blown away by this production and performance. In this more intimate setting the play proved to be even more powerful and absorbing than it was on Broadway. At close range we were able to appreciate all of the subtle nuances of voice, body language, and facial expression as Gatton portrayed not only the fragile, vulnerable, damaged Charlotte (nee Lothar Berfelde) but all of the many other characters- researchers, friends, family members, journalists, Nazis and Stasi thugs- who inform the complex narrative.

Every aspect of this production meshed perfectly. The set, by Brian Prather, was nicely cluttered and claustrophobic. It conveyed Charlotte's eccentric museum of objects from Das Grunderzeit the decade of the 1890s or what she describes with some irony as the "Gay 90s." The lighting of Jacob A. Climer brilliantly enhanced the action as did the sensitive sound design of Matt Kraus and lighting by Scott Pinkney. In the limited confines of the space we get a sense of the endless bric a brac and furniture. We experience Charlotte's obsessive compulsion about Edison gramophones, oil lamps, clocks and furniture, through a clever use of models created skillfully by Paul Eric Pape. From a box set onto a table Charlotte lovingly presented these models as we imagined her conducting a tour of the museum.

These are objects which she rescued/stole during the chaos of the destruction of Berlin and condemned empty homes in East Berlin. She even acquired the entire contents of a landmark, notorious gay bar. Just after she set it up in her basement the building housing the bar was razed by the Stasi. Her underground recreation of the bar became a clandestine meeting place for the gay community until it was attacked and trashed by skinheads. She described with some irony how the gay men ran away while the lesbians stood and fought the thugs.

Pardon me for the gush but how best to convey that this was an absolutely, spot on, flawless, theatrical experience. At the end of the play Gatton steps out of character and conveys the demise of Charlotte. On the Edison gramaphone he plays a snippet of the actual Charlotte's own voice and projects a photo of her as a young boy in a sailor's suit embracing two lion cubs, I found myself overcome with empathy. Gatton powerfully conveyed a sense of the loss of this fragile, tormented muse. At first, one or two individuals stood to cheer and soon the entire audience was on its feet. Except for the critics, of course. There is no cheering in the press box. Consider these remarks as the equivalent of a standing ovation. On every level, this was one of the finest moments of theatre in memory. In baseball we would call this a no hitter. In basketball, a slam dunk.  In boxing, a T.K.O. In art, a masterpiece.

While Barrington was recreating a play which has won the highest levels of recognition it did so with such finesse and attention to detail that it proved to be a simulacrum of the original.

For this very special and compelling production Berkshire Fine Arts is setting a precedent by publishing three reviews. In addition to this overview we will have specialized studies by Astrid Hiemer, who was born in Hamburg during the Nazi era and has many family members who survived the Stasi repressions in East Germany. Larry Murray will concentrate on the issues of gender evoked by the transvestite persona of Charlotte/ Lothar.

This extended coverage of I Am My Own Wife is motivated and justified by the richness, conflicts of character, era, and horrific historic circumstances that surround Charlotte. The play invites multi valent interpretations. There is the daunting question of just how such a flagrant and notorious character could indeed survive such circumstances. These include the murder of her abusive father, the acquisition/theft/rescue of the objects in the museum, and the betrayal of Alfred Kirschner, her lover/ fellow collector/collaborator.

When Charlotte published a memoir of her life it launched her as an international celebrity. But it also put her under the microscope of the media and public opinion. She was given a medal for her accomplishments and then denounced as a spy and Stasi collaborator. So who was the true Charlotte/ Lothar? We learn that under the Stasi one in three East Germans functioned as a spy and collaborator.

For now let us leave by thanking Barrington Stage for this remarkable experience and by urging you not to miss this once in a lifetime performance and production.