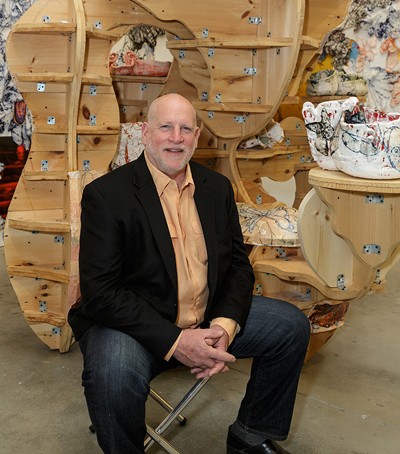 Mark Cooper and his work 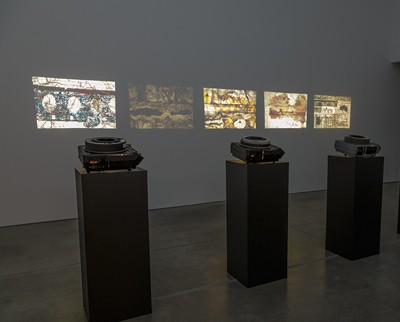 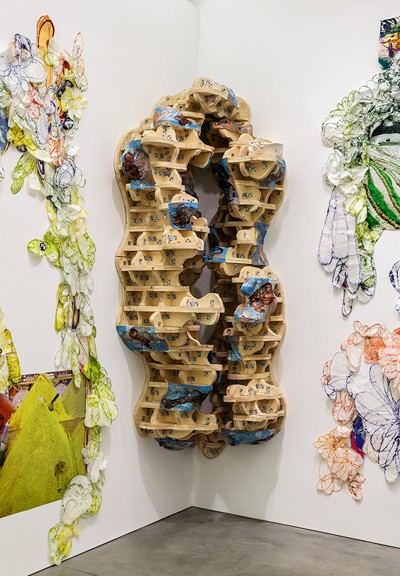 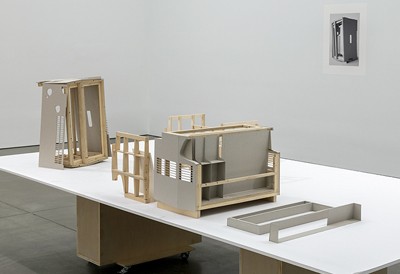 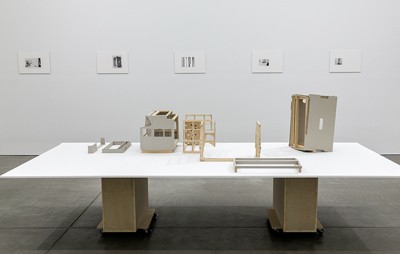 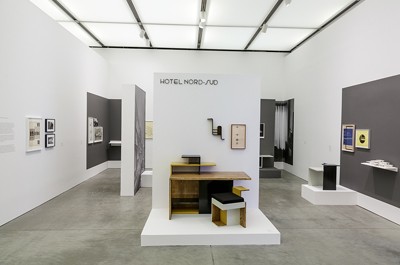 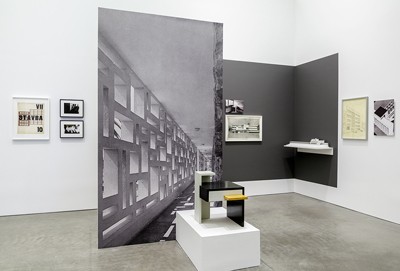 Curator Helen Molesworth has been careful to give equal space to each of the competitors for this year's James and Aydrey Foster Prize, which rewards living Boston artists of achievement. In fact, if you stand in the very center of the space allotted them, you will find yourself in a "sweet spot" from which you can glimpse into each of their respective spaces. It's an exercise in diversity, though Molesworth searched in part for artists with affinities that would allow the show to explore larger themes.

The diverse part is more important, I think, as the work shown is largely a study in contrasts. On the messy, shambolic, expressive side we have the males. These comprise Cooper's organic and crudely handmade sculptural forms and Price's soiled, gritty, gestural abstract slide shows. The women are the cerebral members of this foursome, with Bapst's conceptual take on monochromatic, minimalist sculpture and Burin's dry and deceptively meta-textual installation concerning a forgotten architect.

The attraction for Price's work comes in its rickety nature; his slides are shown on endless loops in trays on real old slide projectors, the kind of technology that Kodak no longer makes, the kind that has just faded from the classroom in favor of digital projection. These noisy, programmed machines require attention, bulb replacement, and run risks of stuck slides and eminent film meltdowns. None of which would perturb Price's images, which are hand-altered slides that include garden detritus, paint, dirt, staining and even insects. They are rough, ready, personal and messy enough already.

Cooper's massive constructs spread and almost ooze across the floors and walls, created clearly by hand with Home Depot type craftsmanship, raw wood and hinges and guidelines left exposed. These bulging armatures are festooned with unlikely but lush embellishments in colored paper and prints, abstract patterns that evoke both the organic and the exotic. The relative constraint of his contribution to the concurrent "New Blue and White" show at the Museum of Fine Arts (where he was restricted to blue and white, as it were) serves him a little better than this dorm-room-on-safari mix. But it's still true that he functions as the emotive, soft and organic counterpart to the restrained explorations of Bapst and Burin, in an interesting upset of gendered expectations.

Bapst's work has the unlikely charm of being almost completely superfluous. More than following the Duchampian approach of rendering readymade objects unusable (and thus, artistic) by combining or altering them, her subtle sculptures take what is merely functional and make sure to prevent even that. In cardboard and balsa, she recreates in meticulous detail the form of an air conditioner housing, exploring all the industrial design that went into such a sadly ugly object. A triumph of function over form, the lowly window air conditioner isn't really something we care about from a visual standpoint. We care only that it works, and with a degree of efficiency and without too much racket. By delicately, precisely replicating such utilitarian forms, Bapst makes the unattractive also purposeless. It's an act so confounding it can only be art, and in fact  careful sepia photographs of her sculptures almost outshine their 3D counterparts, achieving a very unlikely poetry. There's something almost winsome in the studied way they explore her objects, which resemble artifacts of a failed science experiment.

Burin's approach is just as detached, but it's her extremely clever conceit (which I hereby spoil completely), that assured her the winning accolade of the Foster Prize this time. This ersatz museum exhibit, of faded photographs, utilitarian objects and lettering, and a few modernist pieces of furniture, reveals to viewers an unheralded and forgotten female architect of the last century, a Bauhaus graduate named Petra Andrejova-Molnar who is just now being rediscovered. Her buildings and plans seem impressive and elegant. The few pieces of furniture intrigue, no less interesting for the scuffs of time, for the faded and cracked nature of the paint, especially on all those sharp corners. The logo she designed for one client has a charming retro-futuristic quaintness that one associates easily with the ideals of the Bauhaus.

But, in fact, this apocryphal woman is a fiction. Female students of the Bauhaus were encouraged towards textiles and ceramics, while architecture, painting and sculpture (with just a few exceptions) were the province of the males. Burin's fantasy is one that highlights the conservatism in even the most radical Modernism, but also a beguiling one that makes us wish things had been otherwise. Or ask, even now, where are all the great women architects?