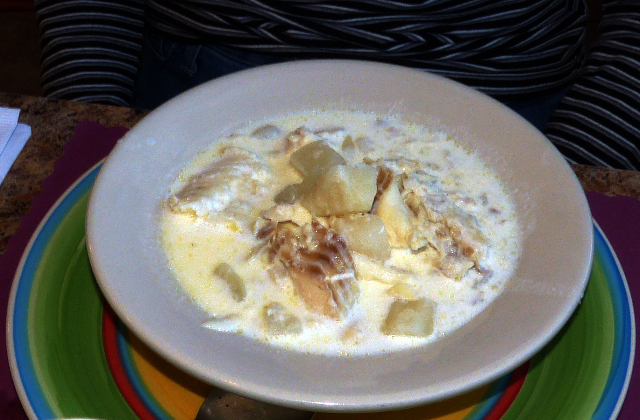 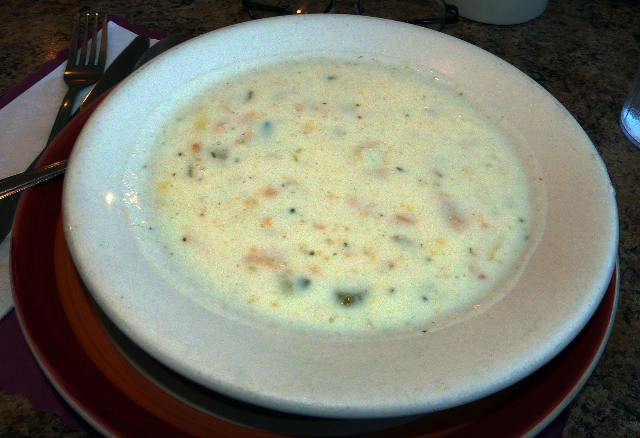 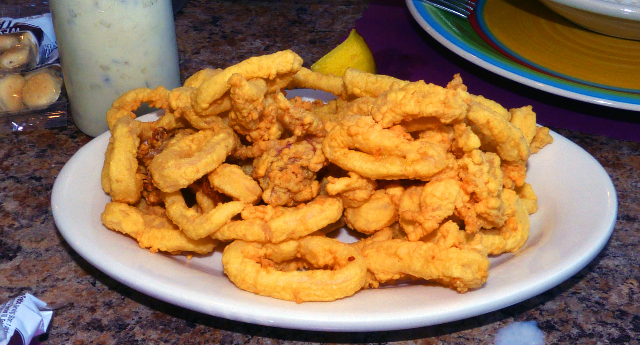 Side order of clamari was crisp and fresh. 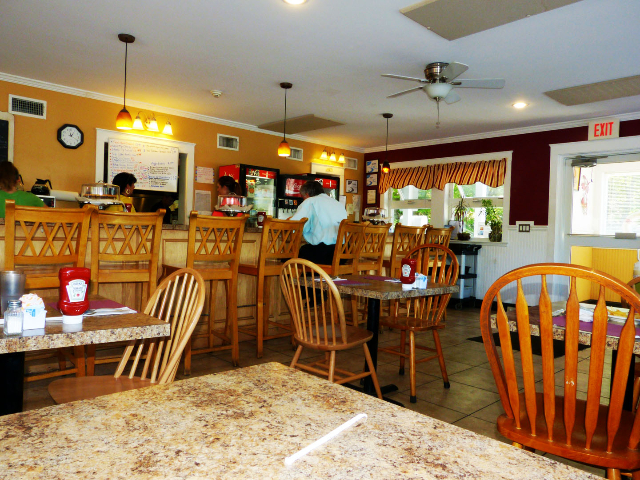 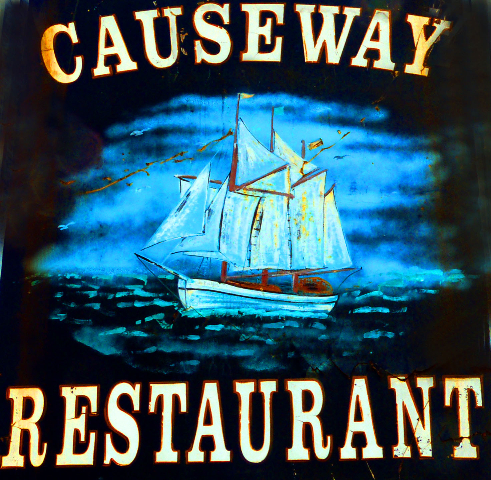 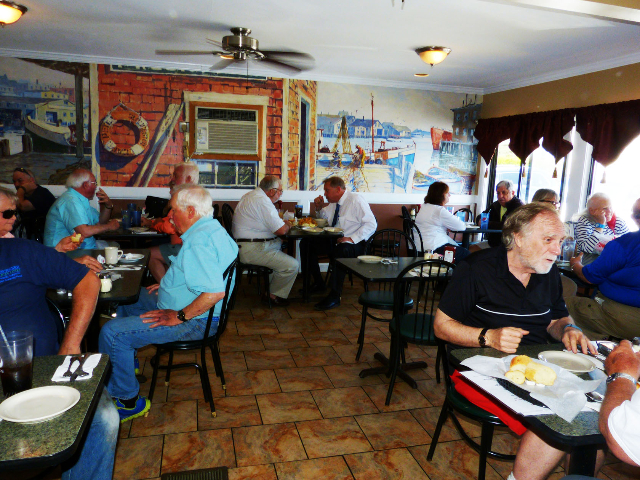 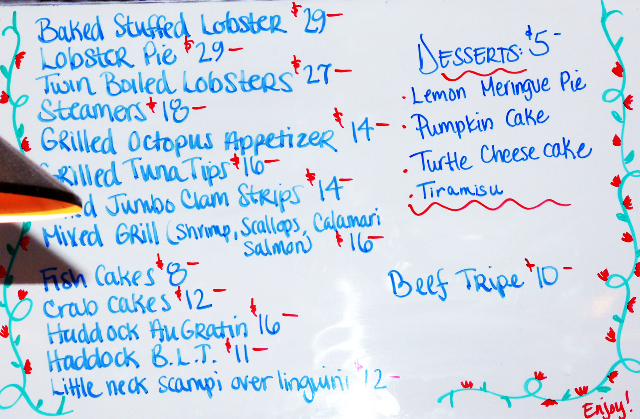 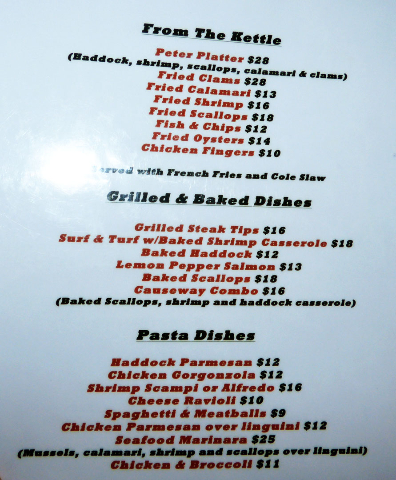 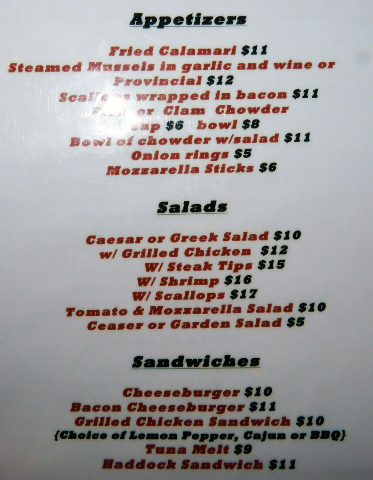 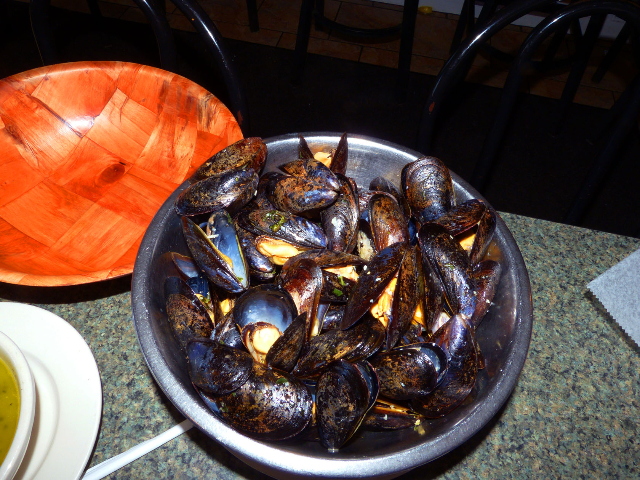 We shared a large order of mussels. 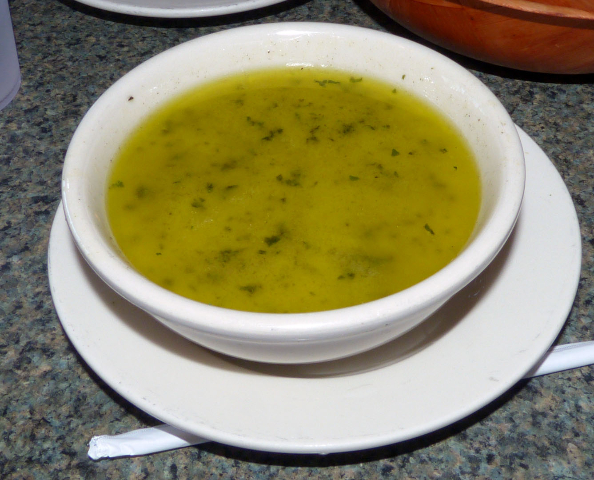 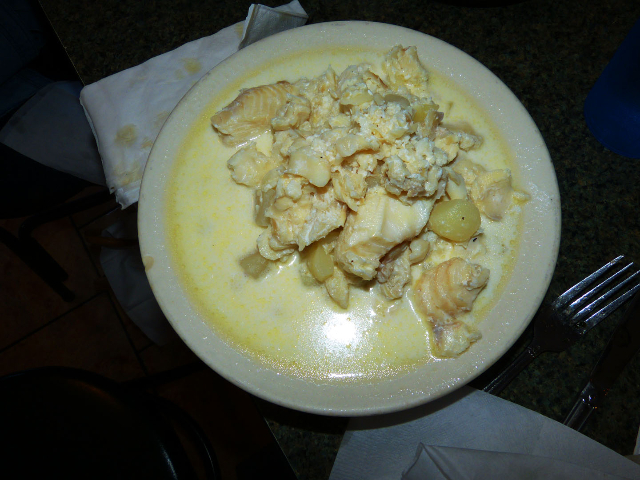 A huge bowl of fish chowder. 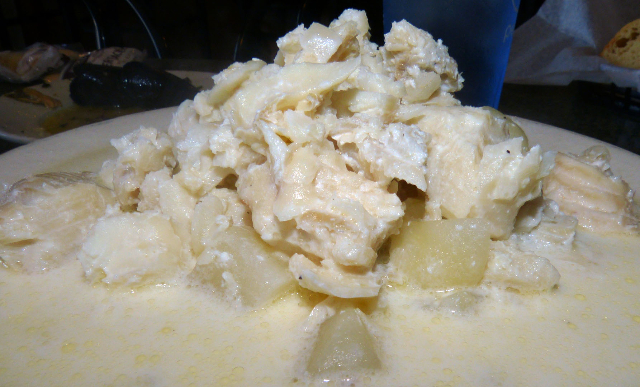 Filled to the brim and plus.

Gloucester fisherman and clammers bring home some of their catch, often the scraps, to make a hearty chowder. It is cheap and filling to feed the family.

The simple recipe has been gussied up and messed with by upscale restaurants coast to coast. Mostly it has such rich cream that it is closer to a desert. Or so much flour that sticking a spoon in it can stand up by itself.

But if you want real down home, New England chowder steer clear of the harbor tourist traps. Their chowder ain’t much better than what they serve in Minnesota in the winter. Seek out the fringe lunch joints like Charley’s and Causeway where the locals go.

When it comes to chowder I have high standards.

My Mom, who summered at Nugent Farm in Rockport, inherited the authentic family recipe.

Start by simmering the fish or clam stock then add potatoes, fat back or bacon, and fried onions. At the end she added whole milk and, a family secret, a can of Borden’s Condensed Milk. That thickened it with no need for yucky flour.

Just before serving piping hot she added a stick of butter and sprinkled on paprika for color and a bit of flavor. At the table you can add salt and pepper.

During the annual Squam Day Regatta they served chowder from Woodman’s in tin pans with a homemade donut stuck on the handle. Unfortunately there weren’t any seconds.

After the matinee at Gloucester Stage we dined at The Rudder in nearby Rocky Neck. It was happy hour with a half price, early bird menu. At just $4 instead of $8 I tried a modest and somewhat sweet and generic order of chowder. For an upscale Gloucester restaurant it was nothing special.

No stay in Gloucester is complete without at least one lunch at Charley’s. It’s a bit obscure to find opposite to the Stop and Shop near Good Harbor Beach. But it’s always mobbed for lunch with locals as well as folks that probably learn of it from some on line sites.

I’ve been going there since I was a teenager; usually for the fried calamari or cod cheeks. They taste like huge scallops but are a lot cheaper. Lots of folks like their lobster rolls. The regulars come for burgers and sandwiches.

Usually I order a bowl of the fish chowder but this time I tried the clam chowder. Overall it was a mistake and lacked the substance of the always excellent and hearty fish chowder.

As a side dish we shared an order of calamari. As usual it was crisp and fresh. They change the oil often and that makes a difference.

Last night we were invited to dinner by our artist friends Susan and Jay. We viewed her work for a pending show at Trident Gallery.

The conversation turned to restaurants and we mentioned Charley’s. They weren’t really familiar with it and asked if we knew about Causeway. It seems they have their own fleet and the fish is super fresh, cheap and comes in huge portions.

Today we tried it for lunch and all of the above proved to be true.

Coming out of downtown you pass the Fisherman’s Monument. Drive over the drawbridge at the cut then bear right. It’s opposite the marina and next to the cinema.

On a pre-season weekday we were immediately seated.

Looking around everything that came out of the kitchen looked awesome.

We shared a huge order of mussels in white wine and garlic sauce. There was a generous dipping bowl as well as fresh bread.

Overall the serving was enormous; about a third bigger than Charley’s. It was loaded with more fish than potato.

But she actually preferred the version at Charley’s where the fish was more firm. While made daily she thought it had been cooking too long with the fish and potato getting too soft and mushy.

As I said, we can be picky about our chowder.

We enjoyed the three older ladies next to us getting together for lunch.

They started with a heaping order of onion rings. One of them said she always orders the crab cakes while the other two stuck with the baked haddock. At $12, cheaper than you can buy it in a fish store, it is the best deal on the menu.

When their meals arrived one of the women exclaimed that “My goodness, it’s a meal and half.”

Chatting with them I chided one of the women for making hardly a dent on her fish.

“Think of the poor starving children” I said.

With a great laugh she responded “I haven’t heard that in years.”

In truth there was enough on her plate to feed a family.

That’s what I’ll order next time for sure.