Backwards from Winter by Douglas Knehans 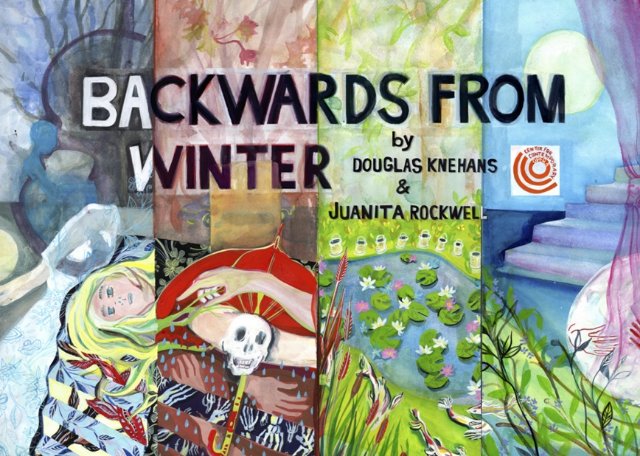 Backwards from Winter by Douglas Knehans

Backwards from Winter had its premier as part of the New York Opera Fest. All the parts that make up opera are unified on stage to create an enormously satisfying theatrical experience.

Monodrama may mean one voice, and Backwards from Winter spoke as one. There are two characters on stage.  The wonderful German soprano Anke Briegel is central to be sure, but she is in duet with cellist Jeffrey Krieger, who. as part of the opera,  dares to speak with her even as he bows his electronic instrument. While Krieger may be more closely tied to the white storage boxes piled up on the floor, he is very much part of the bis scene which encompasses four seasons, moving from winter to spring.

Changes in the season are reflected in tree branches laden with snow, fiery floating red leaves, back through the billowing white clouds of summer which are ticked off finally by purple flowers and then the blues of early spring and nature at its most passionate.

The sound cloud that is created includes at beginning a series of electronic chords which are regal, almost religious. Against this the cello lines, harshened by acoustics, often grate. The enhanced soprano voice is pure as a bell, clear and clearly magnified.

Briegler is an expressive performer. She can bring the feeling of anxiety and pain to the long notes she holds. Yet she still retains their beauty.  Particularly through gesture, she outlines her mood, imprecating, collapsing, even praying over some carton at one moment. She cuts an arresting figure, at first robed and eventually in an elegant white spring dress. Enraptured by spring and her love, this memory now dominates after season's of loss.

The blending of many forms is so successful that only in quiet reflection do you realize how much goes on.  Videos by Yee Eun Nam are striking. Emily Clarkson's lighting design creates the right balance between performers and the running images.

We are under a canopy of nature, sometimes melancholy and at others joyous.  Briegler's clarity of tone is amplified.  None of the electronic music turned shrill.  Composer Knehans has a sense of the right balance between what is human and what is not.  The sometimes abrasive cello lines fit perfectly in the sound cloud.

The opera was confidently performed.  Winding backwards from grief to the joy of spring and awakening leaves both the artists and the audience in a good place.